Last night was rainy and cold so we turned our heater on before we went to bed as we have all winter long. We woke up to the sound of the carbon monoxide detector going off in the early hours of the morning. At least we know it works! Even though we had a window down a crack it was so calm outside that there wasn't enough airflow. It was warm and toasty inside so we turned off the heater, opened another window and went back to sleep. We woke up to so much more rain that the river had risen and was starting to surround the bus. We still had a way out though but it explains why we saw so many RV's at the top of the hill all parked in a parking lot. We were the only ones foolish (or brave enough depending on how you look at it) to park by the water. Hey, life's an adventure, we might as well live it! By the time we had our coffees and were ready to start the day all of the RV's up top were long gone. We continued east stopping for gas and at the gas station someone was delivering fresh homemade bread. Of course I couldn't resist and bought a loaf of chocolate bread. I had never had it before and it was amazing! We stopped for a coffee break and made the decision to check out the Cosmodome in Laval. The place was totally designed for kids with a space camp and training missions but it was still fun and we both learned something! We left Laval just as rush hour was starting and managed to escape most of the stop and go traffic. Up until this point we had taken the closest road to the river and followed it along but because we were trying to beat the traffic we took the highway. We were shocked that the water levels had almost made it to the highway and we could see houses and farms flooded. Michael was a bit annoyed that I wasn't catching the devastation on video but it didn't feel right. There were herons both white and blue at the edge of the water (lots of them spaced out about every 50 ft) just standing there waiting. It took us a minute to realize they were waiting for small escaping animals to prey upon. Our next stop was Parc Laviolette in Trois Rivieres. It was still pouring down rain but the dogs still needed to be taken out and there was a really cool bridge here I wanted to check out. The park was fairly small but had everything imaginable soccer fields, baseball diamond, outdoor fitness equipment (more machines than I've seen anywhere else), a splash pad for the kids and it was along the St. Laurence. Again it was flooded and pathways, park benches, picnic tables and street lamps were all submerged in water. Back at the bus we had dinner and started to relax for the night only to realize after we were all comfortable that we were out of cream. We are both coffee addicts and have our coffee routines last thing before bed and first thing in the morning so being out of cream was a bit of a disaster. We left the beautiful park and headed to McDonalds for our bedtime coffees and then parked in the adjacent Walmart parking lot where we knew we could get cream first thing in the morning. Walmart isn't as pretty and definitely not my first choice but it is nice to know that if we ever need a place to park it will be safe and no one will ask us to move. Goodnight World! 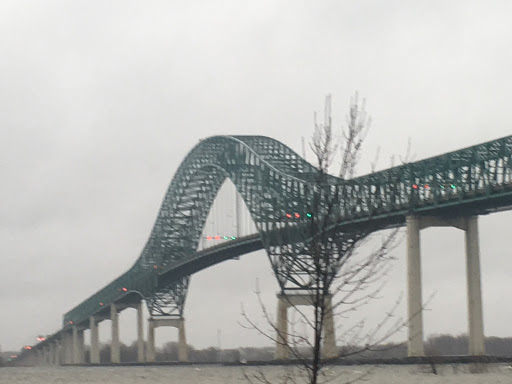