I've gotten a little behind as we've spend so much time driving in the past few days. We made it back to the Midland area and will be here for at least a few weeks. It's not as much fun travelling when the goal is to just put in the miles but we did manage to enjoy the last few days. We stopped back in and spent the night in Montebello where we had stayed a month ago where we had woken up to water surrounding the bus. It turns out we had been very lucky! The waters continued to rise so much after we left that our bus where we had parked that night would have been entirely covered. Now the waters were receded leaving a giant mess to be cleaned up. In Montebello we took the dogs for a walk through Manoir Papineau National Historic Site. The grounds were beautiful and filled with forest trails unfortunately they were also filled with blood sucking mosquitoes that couldn't get enough of me! It wasn't too bad as long as we kept moving but the second I stopped for anything the mosquitoes were biting. The estate was impressive and had a three hundred year old oak tree that was so old that they had added a few supports to help the largest limbs stay up (a technique successfully used in Europe to keep old trees alive). They had also taken twenty of its acorns and planted them all over the east coast but so far only one has taken. We made a very brief stop in Ottawa and ended up in Arnprior for a night before driving through Algonquin Park. We saw a moose! A cute little guy that wasn't even scared off when our dogs started barking like crazy. Actually I was surprised that Melkie didn't seem bothered (on the AT he chased a moose), Cooper was the noisy one. Anyway, we pulled into town late last night and will regroup and make sure the bus is ready for the west coast. 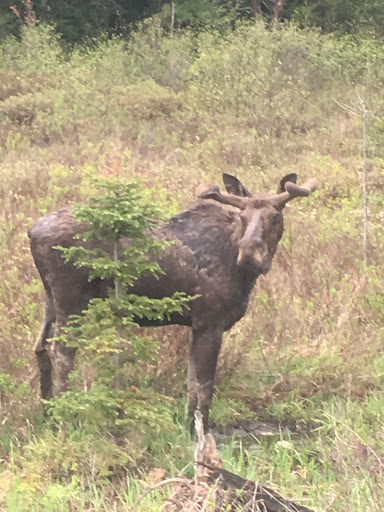