Good morning Lake Erie! We woke up so early this morning and after our coffees we headed a few km up the road to Wheatley Provincial Park. This was the park that we had driven by without even noticing on our way south. On the map it looks to be a tiny, little park and for some reason I didn't have high expectations. Boy, was I wrong! This park was beautiful and the staff were awesome! When we first pulled up and the staff realized we had dogs they both came out to greet and pet the dogs and then told us how to get to the best spot in the park. We ended up parking in the day use area which was essentially a huge park with mature trees that overlooked an endless sandy beach. We walked along a trail that led to a bridge that crossed a marshy area and over to the campground area. We quickly realized that where we were original was much nicer and turned around this time taking a narrow dirt path that led into the woods. I loved it, Michael not so much. He kept walking into spider webs and was happy when we arrived at the beach. We walked the beach back letting the dogs swim. The water was cold and felt nice on my sore joints. Back at the bus we spent about the same amount of time relaxing as we did doing chores.i After cleaning up the kitchen I gave Michael a haircut and then we took turns walking over to the campground for showers. On our way out we stopped to top up our water before leaving the campground. Next stop Springbank Park in London. It was a long drive and I did make one extra stop for pies before we pulled into the park. It's probably been twenty years since I was here last (my grandparents lived in London so we used to come here a lot) and although I remembered what was here I had a hard time navigating the one way roads within the park. We ended up parking at the far end in a smaller more remote parking lot and took the dogs for a walk along the river right away. Everything looked smaller in Storybook Gardens than I had remembered it! After walking about half the park and arriving back at the bus just as it was getting dark we had one last coffee and set up the bed. Good night World! 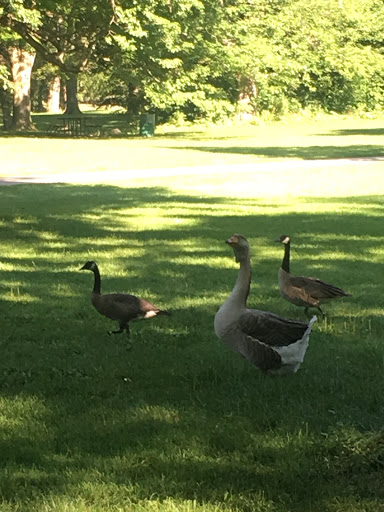