We woke up early this morning and when I used my GPS to map out our route it redirected me away from the ferry to a bridge up the road. If I had checked last night we could have stayed on the other side of the river. Anyway, we were soon crossing the bridge and once past Levi's we got off the highway and took the road less travelled along the river. The views were amazing! Along the river we saw tons of birds that looked like a cross between a duck and a goose. On the other side we saw the hills dotted with homes along the shore. We drove through tiny little quaint communities and every single one of them had a silver church. Not sure why they were all silver but it was fun to look out for as we entered each hamlet. I couldn't believe how many farms we saw along the way! Farming is still alive in Quebec and New Brunswick! The closer we got to New Brunswick the more the hills reminded me of the Appalachian Trail. At one point even Michael even said that it would be fun to go hike one of the hills and he isn't even into hiking. It just looked so inviting! I really like taking the less travelled roads that way I get to see how people in the area actually live as opposed to taking a highway where everything looks the same. However the road we were on was full of pot holes and Michael was grumbling. The funny thing was that as soon as we reached New Brunswick the road got even worse! I'm not sure how Michael is going to handle Nova Scotia (I remember Nova Scotia roads being "fun" but that was on a motorcycle six years ago). We saw snow today starting in Quebec and more in New Brunswick and not just snow but whole lakes that were still frozen over! We stopped for gas in Edmundston and and headed to the big highway arriving at Grand Falls just as it was getting dark. We found an awesome spot to stay where I could see the TransCanada Trail from the bus but Michael didn't have a good feeling about it so we switched to the trusty Walmart parking lot where we could already see another RV set up for the night. Gotta go with your gut feeling! Today was a lot of driving and I am exhausted. Good night world! 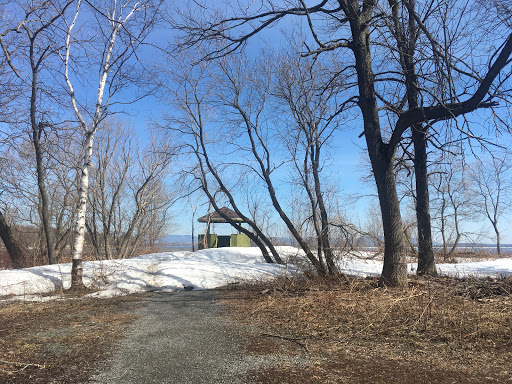