I woke up abruptly this morning wondering what time it was. We had parked at the harbour front and our parking ticket was only good until 8am. Thankfully it was only 5:45am so I relaxed for a little longer before getting up. Michael made us coffees and soon we were on our way to Chutes Montemorency. The short drive there was surprisingly pleasant (we were driving in what should have been rush hour traffic). We were surprised to see the low water levels were when up until this point everything was flooded. It wasn't until later in the day that we realized that we are getting close enough to the ocean that the tides are affecting the river. As we approached the falls there was a beautiful bridge connecting the mainland to an island out in the middle of the St. Lawrence. We initially thought the park was closed because we didn't have to pay for parking but it turns out that we just beat the employees to work and our reward was free parking. The place was beautiful! The falls are huge, ninety eight feet higher than Niagara Falls! There was a tram ride to the top, a zip line across the front of the falls and rock climbing. Yet with all those activities the land retained its natural beauty. There were trails from the bottom to the top but they were closed so we walked back towards town and took the first road that headed up. At the top there were several lookout points to view the Falls and a giant suspended bridge hanging over the falls. There were also trails through wooded areas and an open field that connected with the town. We spent the entire day there and contemplated staying the night. After the park closed several locals arrived to walk their dogs. One guy brought a drone and took it for a spin over the Falls. I bet he got some amazing footage. As it got dark we noticed that a parks vehicle and a police car seemed to be taking turns making the rounds through the parking lot so we decided to move on before we were asked to leave. We need to get on the ferry to cross to Levis next but when we arrived back in Quebec City the ferry was closed for the night. Off to find a free place to park for the night and we will be back in the morning. Good night World! 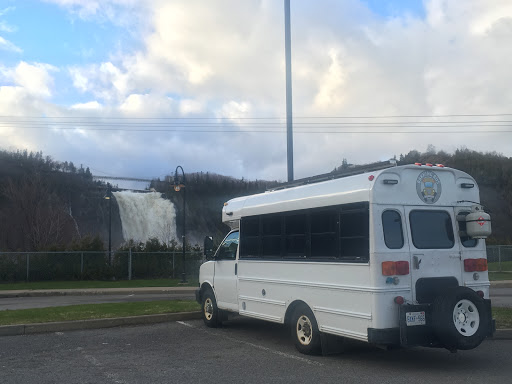