The sky was grey but it wasn't raining when we woke up. I thought for sure Michael would want to try to get a round of golf in so I was surprised when he didn't seem that interested. Instead we chose to take the Central Coastal Drive and immediately fell in love with the red cliff coastlines. We stopped several times to take pictures in Prince Edward Island National Park. It was too bad the dogs weren't allowed to go on the beach (for ecological reasons) because it looked like the perfect place for a long walk. I did take my scandals off and at least go in the water and I found some cool shells and parts of eaten crabs. The day was full of stops as we would head up the road only to stop at the next look out point or lighthouse. As it started to rain we were entering the Cavendish area filled with everything Anne of Green gables including the village of Avonlea, the house that Lucy Maud Montgomery was born and of course the house she was raised in that became the Anne of Green Gable house. As we finished the Central Coastal Dive we made a detour into Summerside the only other substantial town on the island and ended up deciding to stay the night. Good night world! 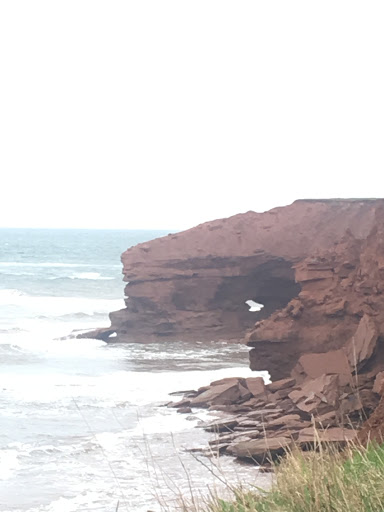