After my grocery stop and coffees were doled out we headed over to Forges du Saint-Maurice. It's a national historic site because it is the remains of the first iron industry in Canada. The grounds were beautiful and even though the park was closed there were helpful employees who explained the layout of the park and allowed us to wander around and read all of the info around the outdoor exhibits. On one hand it was neat to imagine how the early settlers must have lived but on the other hand it was sad to read about how the land was abused and the water was polluted. I jokingly said that today's focus was going to be on Canada's first mistakes. Later in the day as I took pictures of the cannons on the wall of old Quebec City and saw the Fortifications of Quebec Artillery Park (another historical site in Quebec City) I sarcastically added my comments to that theme. But that's a story for another day. After Forges du Saint-Maurice we slowly made our way to Quebec City taking the riverside route and again saw more flooding. I felt bad for the home owners and wondered how often this happens here. We finally arrived at Quebec City, parked at the harbour front and started walking. Michael had never been here before so we took our time checking out the shops as we passed. The funicular (a rail tram that takes you up the hill) was too hard to pass up and soon we were at the top of the old city within the castle like walls. We stepped out to a view of Chateau Frontenac and the sounds of a saxophonist serenading us! We both started taking pictures before resuming the window shopping. I was tempted to buy a souvenir but realized that I can't buy something everywhere I go. There's no room on the bus! It kind of felt like we were on a date and so we decided to go out for dinner. After dinner at a place called Mike's we headed back to the bus and took the dogs out to explore the waterfront. We decided to stay parked right where we were with a view of the old city in front of us and a waterfront view behind us. Good night world! 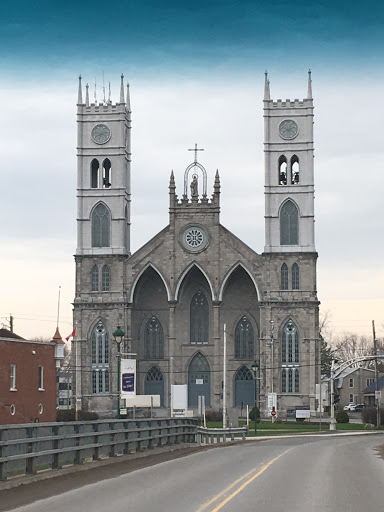