We woke up at a tourist information kiosk just outside of Manitowaning. We took our time having coffee and getting ready for the day thinking that the kiosk would open and we could easily see what was in the area. We were ready to move on but the kiosk wasn't open and it was almost 10am we decided to move on. We drove into town and found the perfect place to park down by the water. There was an old mill and the last steamship built in Canada after WW2 sitting at the docks. Next we went up to the museum but decided to just look around the buildings outside before moving on to the next town. We stopped several times along the road once at a native art store and lookout point and then at a junk store (for Michael) and another museum along the way. Manitoulin is one of those places where you feel like you are going back in time. Everyone seems more relaxed here, real estate is cheaper and there are lots of neat places to explore. Sadly, we are deciding to leave the island and turn east rather than west. We are getting low on funds (I knew this would happen eventually it's been almost a year since I worked last) and it will be easier for us to pick up jobs in an area we are familiar with and where people know and trust us. We took our time heading back and spent another night in Sudbury before moving on to Grundy Lake Provincial Park. The park was awesome! It had lots of smooth giant rocks along the water and several places to jump off and dive in from different heights. We took a trail over the rocks that led us to a Falls. We stopped and sat watching the divers, kayakers and paddle boarders on the rocks for a long time before heading back to the bus. There was another trail that led to a heron rookery so we moved the bus near that trailhead and I stayed with the dogs while Michael took a muddy trail to where he hoped to heat some awesome pictures. He came back disappointed. There were mosquitoes everywhere and the boardwalk section nearest the rookery was closed due to high water levels. I made dinner while Michael tried to catch a fish and then after the sun set we pulled away from the park. We made it as far as Parry Sound and called it a night at good old Walmart. 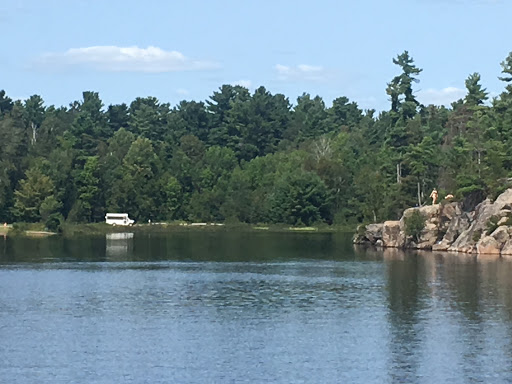 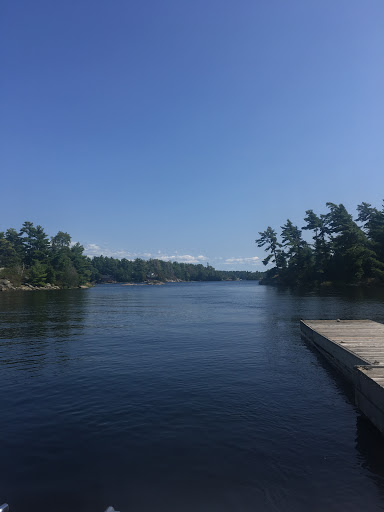