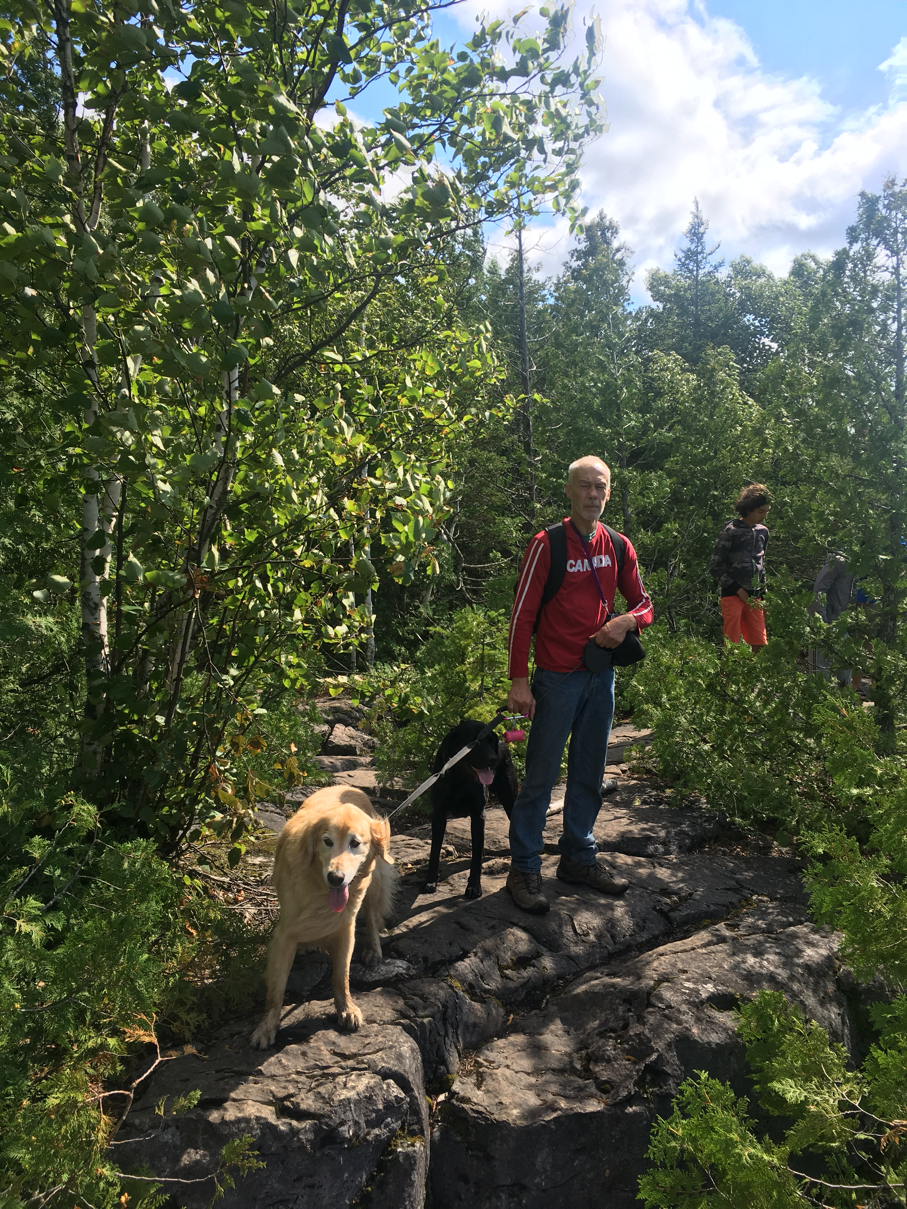 When I started this list I didn’t realize just how many places we had hiked this year and have had to condense the list by only listing one provincial park from each province and even with that the list is still so ridiculously long that I’ve divided it into two parts. Obviously our dogs are happy and we have had an incredible hiking year. Sometimes (as a former thruhiker) a day hike doesn’t seem like much but now I’m wishing I had tracked all those miles.   Here is our list:

The old Molson property in Barrie, Ontario
Although the factory is gone all of the old trail are still there. It’s a great place to stop and take the dogs for a walk within the city limits.  There is a path from the Cabella’s parking lot or you can park in the old employee parking lot off of Big Bay Rd.

Ardagh Bluffs, Barrie, Ontario
This was an amazing find! Again it was within the city limits yet it felt like we were out in backcountry! The dense forest covered any city sounds and the trails were narrow and hilly! It was the perfect place for a day hike with the dogs!

Springwater Park, Midhurst, Ontario
This is another goldmine for hiking! There are several shorter loop trails totalling 12km of trails. Again perfect for a day hike.

Tiffin Centre for Conservation, Angus, Ontario
This place has amazing trails but was a bit of a nuisance as it had paid parking and the dogs had to be leashes the entire time. It was still a great way to spend a day.

Island Lake Conservation Area, Orangeville, Ontario
We discovered this trail in February and chose to come back to it a few times during the summer. It’s a multi use trail that follows around a lake and over several bridges to make it around a 12km loop (I think).

The Tay Trail, Victoria Harbour, Ontario
This is part of the TransCanada Trail and is great because there are so many different trail heads and you could spend days on the trail by just continuing on to the next trail system (many local trails all connect to become part of the TransCanada Trail). We often parked at the Wye Marsh or Ste Marie and hiked to Port McNichol and Victoria Harbour. Sometimes in the evening we would park near the Martyr’s Shrine and Michael would drop me off so that I could take the trail into Midland and meet him downtown at the waterfront (I was trying to hike at least 15km per day).

Ganaraska Trail, Penetanguishene, Ontario
This is part of a much larger trail and over the year we have enjoyed bringing the dogs here. There is limited parking (which makes it easy for us to decide whether we can have the dogs off leash or not) and there are several little streams or waterways with well built bridges to cross. Potentially we could have hiked for days as this trail connects with the Georgian Bay Trail but this year we stayed on the section between Balm Beach and PENETANGUISHENE. This is a gorgeous trail that starts out hilly with several bridges but ends up on an old railway at some points too close to the road for my comfort. Definitely a do not miss trail to check out. Many locals come here for special event photos as it is beautiful!

Georgian Bay Trail, Collingwood, Ontario
We were on this trail at least twice this year. The first time was out closer to Craigleith and the second time was a hike through town. Both days were enjoyable but it was more of a typical city walk with the dogs leashes the entire way.

City of Orillia Recreation Trails, Orillia, Ontario
Believe it or not Orillia has 29km of trails and for being in a city they are more serene that you would think. We spent a day starting at the waterfront in Orillia and taking the trail system east. We were amazed at how quickly we were in a rural area and soon the dogs were enjoying an off leash romp. I’m not sure how far we went that day but even the dogs were tired by the time we got back to the bus..

Algonquin Provincial Park
We hiked on several different trails here on several occasions this summer and enjoyed it every single time. We had a seasonal day pass that allowed us into every Ontario Provincial Park and we used it quite often. Rather than list all of the parks we stopped and hiked in (we were at 23 different provincial parks this year and some of those parks we were at multiple times) I will just say that almost every provincial park has hiking trails and some of them are amazing! It is well worth the cost of a park pass to enjoy the trails (and facilities) Ontario has to offer.

The Bruce Trail, Clearview, Ontario
This is an absolutely gorgeous trail that runs the entire Niagara escarpment. In previous years I have hiked most of it but this year we only did a few day hikes in two different areas. We spend a day hiking near Devil’s Glen Provincial Park on the Bruce and another day early in the year near Hamilton. Both day hikes were amazing in fact most of the Bruce trail I would consider a must see place to hike.

Thames River Loop, London, Ontario
This was just an 8km loop that followed the Thames downtown and  back. We spent the night near the trail and hiked it in the evening and again the next morning.

Thames Valley Parkway, London, Ontario
An entire day was spent roaming the the hiking/cycling/ rollerblading path system along the Thames and through Springbank Park. We were so impressed with London’s trails!

Ottawa River Pathway, Ottawa,Ontario
I think this was a 30km trail that attached to other trails. We started on another trail in Quebec that led us across a ridge and onto this trail.  Most of it was paved and busy with people but still incredibly enjoyable as it passes several must see sights along the waterfront and up the Rideau Canal.

Cup and Saucer Trail, Manitoulin Island, Ontario
We spent about half a day here. The trail led us up to the top of some cliffs and followed the top along the edge and through the woods before looping back to go down the same way we went up.

Bridal Veil Trail, Manitoulin Island, Ontario
This was a short trail started at the water and followed a stream back to an amazing waterfall.

Waterfront Trail, Sudbury, Ontario
This was an accidental find as we had parked across from Bell Park and needed to take the dogs for a walk. We headed down towards the water and I was happy to find a trail that had the TransCanada logo. As we headed towards the Science Centre the trail switched from pavement to boardwalk and out over the water on a dock/bridge. It was so enjoyable! in the opposite direction the trail leads
to Rotary Park where we found a swim area, playground, gardens and gazebo.

Hiawatha Highlands, Sault Ste Marie, Ontario
This was the perfect day hike. There were multiple intersecting trails and I was actually worried that we had taken the wrong trail at one point but it turned out be a great little adventure!

Voyageur Trail, Sault Ste Marie, Ontario
This is a large trail that runs from Sudbury to Thunder Bay but we only did a short day hike on a section of it near Sault Ste Marie. The trail was awesome and I would love to go back and hike the whole thing!

Email ThisBlogThis!Share to TwitterShare to FacebookShare to Pinterest
Labels: beautiful trails, day hike, happy dogs, hiking in ontario, hiking trails near me, Ontario hiking, places to hike in ontario, where to hike