Back in Beautiful BC 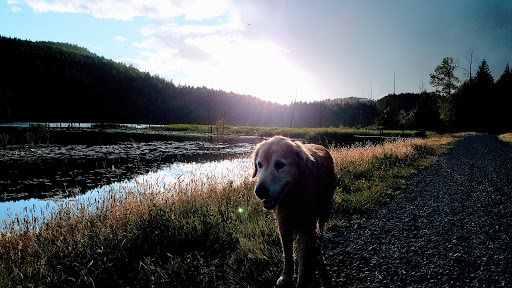 I flew back to Ontario for three weeks to visit family and friends and congratulate my daughter on graduating as an RN. The days flew by and it feels like I was only there for a few minutes. I did manage to keep up my training miles by walking all over Ottawa and there were several days that ended up being over 34km (20 miles). The only problem is that Ottawa is flat so imagine my surprise when I got back to be out of breath on a short 15km  hike up a mountain. I'm sure I will be ready by the time.i do finally get to start the trail though. Michael has been hiking with me daily and we have hiked most of the local mountains along with a huge portion of the Trans Canada Trail (they are calling it The Great Trail now) in this area.

In the meantime, the work Michael had been promised for the season hasn't panned out and we aren't quite sure what to do. Originally when I first made plans to hike the PCT we had planned for Michael to follow along with the bus and be my support. We got sidetracked with the promise of a high paying job and quickly changed our plans. Now I'm wishing we had stuck to our original plan as there is no high paying job and we just don't have enough saved up for him to follow along and support me. I'm not panicking or anything. I know that things have a way of working themselves out but I am all of a sudden trying to come up with ways to shave the expenses on this hike. And I don't like the idea of Michael having to cross the country on his own to get back to Ontario. Funny eh! I will be out in the wilderness with bears and mountain lions yet am more concerned about Michael driving over the mountains and across the prairies on his own.

Awhile back a trail angel offered to help me get to Harts Pass. Harts Pass is the closest pass to the border (on the American side) that is accessible by road. At the time I thought Michael would be taking me with the bus  but the more we thought about it the more nervous we were about crossing the border with a bus that looks like a hippie bus. I recently sent this trail angel a message asking for some transportation advise and he offered.to meet me at the ferry at Anacortes, make the necessary stops I need to make and take me to the trail! How awesome is that! We don't have to worry about our bus being torn apart at the border. We won't have to pay the extra ferry fees for the bus both ways! And I won't have to figure out transportation or where to stop on roads that I'm not familiar with!