Well that was fun. 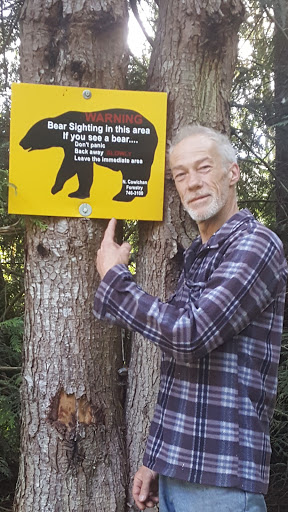 Today brought more memories of hiking the Appalachian Trail. This time it was the time Melkie decided to chase a moose and I thought the moose had turned around and was charging right at me. And the time he decided to chase the bull. And the many deer he sent on their way long before I had the chance to take a picture. Can you tell where I'm going with this story? Take those experiences and magnify the adrenaline by at least ten!

We were walking the dogs just outside of Duncan along an abandoned rail trail. And yes we knew there were bears in the area we had seen bears and a cougar here on previous occasions and today we saw proof in the form of fresh bear scat. We had gone as far as we wanted to go for the day and had just turned to head back when I spotted something black ahead of me. It took me a minute to realize that it wasn't Cooper and it was a lot bigger than Cooper. Of course by that time Melkie was already onto him. Racing down the tracks towards the sleepy bear not listening our pleas  to come back. Within seconds the bear started to run which only made Melkie race faster. The bear headed to the woods and although I was upset, i was pretty sure my dog would come back unharmed. Until a moment later when a second even larger bear stepped out on the tracks in between us and where Melkie disappeared. Oh! Shit! We were hanging on to Cooper who was barking loudly and I thought for sure this new big bear would attack Melkie if he reappeared especially being stuck in between two dogs. Michael decided foolishly to go towards the bear which only made Cooper freak out more and within seconds he had wriggled free of his loose collar. Fortunately Michael was able grab him and about this time Melkie reappeared and somehow got by the big bear without harm. As Melkie was running back towards us the big bear decided to come our way. The bear wasn't up on its  hind legs and wasn't giving the tell tale warning sounds but was definitely giving us the message to get out of there and get out of there fast. We were careful not to run but continued to move away from the area until the bear turned around and headed back. Unfortunately we also had to turn around and go back that same way as that was the way back to the bus. This time the dogs were on leashes.

This whole chasing wild animals thing just makes me feel a little better about leaving Melkie behind and I'm adding it as one more reason not to bring him on this next advent8ure.