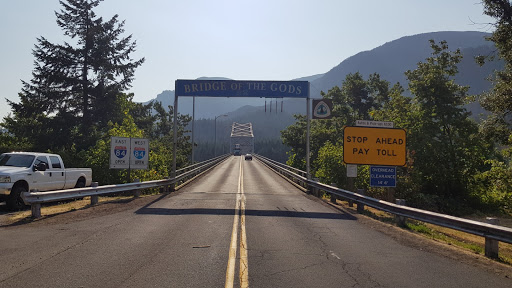 This is a guest post from my hiking partner Rogue.

"And it came to pass that they entered the state of Oregon on the thirty-first of the month of July in the year of two thousand and eighteen, full of anxiety and trepidation, for it was foretold that it would be wearisome and desolate of feature."- Gospel of Rogue 4.31The "Bridge of the Gods" welcomed us into both Oregon and the small town of Cascade Locks with beautiful sunshine and strong winds. The bridge's grated surface also allowed for fear inducing views straight down to the river far below and at the end of it we hugged, both to celebrate our arrival in another state but also that we'd made it across the bridge safely.Although a diner is conveniently situated right next to the bridge we naturally decided to take the long walk into town instead to get our first meal. After our famished stomachs had been pacified we decided to have a second breakfast straight away - then beer, then ice cream, lunch, dinner, second dinner, ... Oh well, I guess all in all we had eight meals while we were there. The "Thunder Island Brewery" is particularly noteworthy, as it is hiker friendly, offers good craft beers, and truly fantastic food. Alas, we couldn't stay for long, or they might've had to roll us out of town. 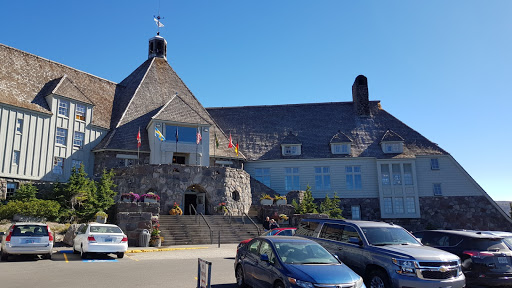 Instead we made our way towards Mount Hood, which we reached on August 3rd. Cold clamminess not withstanding, we enjoyed the days very much. The scenery was breathtaking and magical and the morning fog at high altitude added to the atmosphere.On the southern flanks of Mount Hood sits Timberline Lodge. It is both a registered historic place and landmark. It was also the (outside) setting of the "heeere is Johnny" hotel in "The Shining". On top of this, it's also a welcome break to hungry hikers, due to their fabled all-you-can-eat breakfast buffet. It took us three visits to the laden counters, before we waved defeat and left the cozy interior - in search for some more food to take on the trail. At the marvellously overpriced vending machines (20oz bottle of pop for $3), we ran into "The Kid", a very nice 18 year old thru-hiker who explained to us the virtues of paperless pooping in the woods and the various advantages and disadvantages of different materials one might find along the way.

Even past Mount Hood, the landscape was fabulous, and surprised us with plenty of variety and awesomeness. "Little Crater Lake" was small but very blue indead, and gave opportunity for some trail magic from some well meaning tourists, who came after us to drop some freshly plucked strawberries into our eager hands. Fresh water from a hand pump made our day complete. 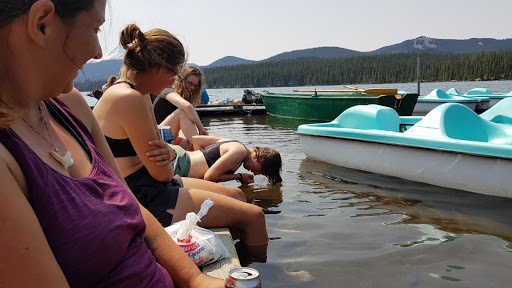 Olallie Lake was a nice change from the trail routine and offered beer and snacks and an opportunity to wash some hair - that needed it, apparently. We also received some awesome trail magic in form of hot dogs, bananas, and drinks.After a restful pit stop in Bend, we were back on trail only a scant few miles, when our weary and tired feet took us into the marvel that is the "Big Lake Youth Center". They hadn't just built a house - specifically catering to through hikers, with kitchen, coffee machine, laundry, and showers - they also fed and watered any hiker who made it there. Three meals a day, sometimes serving twenty or more hikers. We accepted this outstanding hospitality and then found a spot by the lake, where we cowboy camped for the first time on this trail and had a great night. 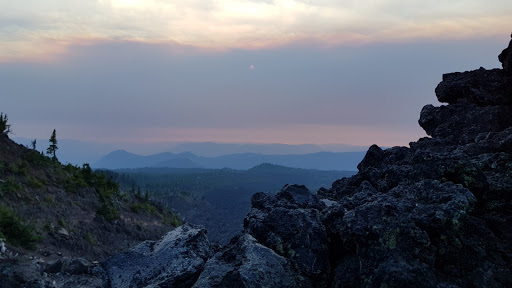 The lava fields near the "Three Sisters" were the next attraction we stumbled across. A volcanic eruption over 2000 years ago had spewed forth a jumbled mess of basalt in which we found endless opportunity to take pictures and play around in, like we were kids. The slight smokiness from the distant wildfires enhanced the visuals dramatically. 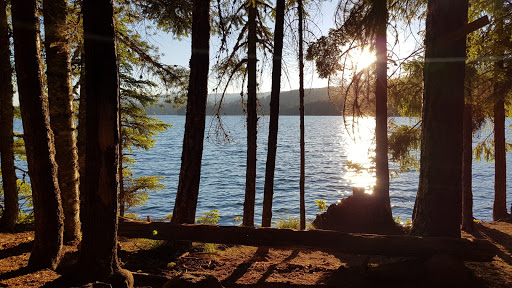 After a delightful evening and exquisite sunset at Charlton Lake, we carried our tired bodies into Shelter Cove Resort, where we gorged on pizza and beer. The night was spent in the PCT area, where multiple thru-hikers mistook Trouble's hammock spot for a washroom at night. Once she actually had to shout out to prevent an embarrassment. 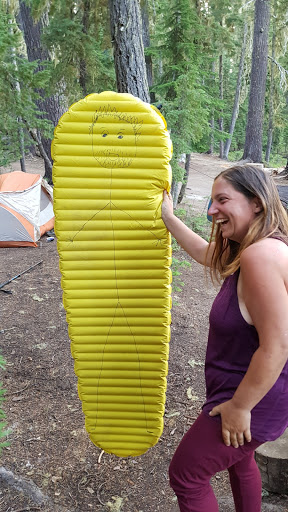 At the shores of Summit Lake, we ran into our old friends Pokerface, Jack the Ripper, and Full Moon and spent the evening and night with them. Copious amounts of fresh air and good humour made us decorate Pokerface's mattress with a likeness of her future husband. He looks like a dashing young chap. 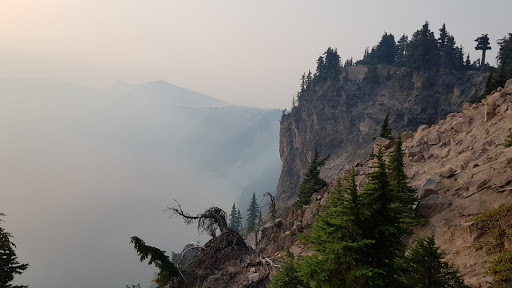 On August 17 we finally reached Crater Lake. We woke up especially early for this side trail and managed to view the sunrise over the crater rim. Although the area was shrouded in thick smoke from the nearby wildfires, and we couldn't even make out the opposite side of the rim, it made for an extra special sunrise experience and transformed the crater into a magical wonderland that offered mystical view after mystical view.
The later meal at Mazama Village was rather less exciting, but it gave us opportunity to resupply in the neighbouring convenience store, to down a bucket of ice cream, and to catch up on hiker gossip with fellow ramblers who were hanging out in front of the store.

After this, Oregon said slowly goodbye to us, as we were making our way along some of the smaller resorts on the way to the border. The scenery changed from green woodlands to the more Northern Californiesque dry grasslands and different wildflowers. It was beautiful to observe the changes as were getting closer and closer to the border.

We crossed the border on August 24th. I was somewhat tired. But I wasn't worried. I had backup. Thus I made it across the border to Northern California - without any effort. Life is good.

"And they passed into the next realm, full of happiness and good memories. The portended insipidity had not come to pass and they were grateful for it."
- Gospel of Rogue 4.57