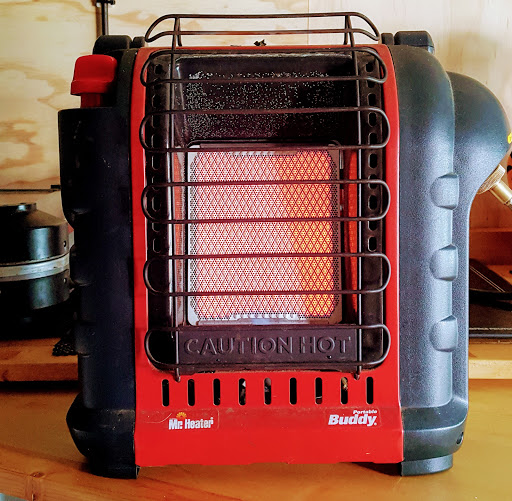 There are several disadvantages to using a Mr. Buddy heater as your only heat source. First of all it off gases carbon monoxide which can kill you! We have a small battery operated smoke and carbon monoxide detector on the bus to alert us when the levels are unsafe. It goes off more than I'd like to admit. Often in the middle of the night when the heater has been on straight for hours, requiring one of us to get up and open the window to let some fresh air in and/or turn off the heater for a bit. The other concern with Mr. Buddy is that he creates water. As the propane burns another by product is water which then collects on all of our windows and sometimes our ceiling. Somehow we have managed to avoid any mould problems but it could happen any day now. I wipe up the water or scrape the frost each morning and clean the bus more often than I used to clean my house but without a vented heater or an alternate heat system there isn't too much else we can do to get rid of the extra water.

Those are the natural disadvantages but what about when you add the human error factor in?  We are both pretty careful when it comes to using the heater and where it is placed but accidents can happen.

One night as I set up the heater I forgot to tighten the hose. I turned on the heater and watched as it lit up. When I saw everything was good I turned my back and that's when I heard a "pouf" sound. I thought for a second that my hair had caught fire! When I turned around I quickly realized what had happened and could see the flame growing on the side of the heater where the hose attached. Michael turned off the the propane from a safety valve he had added when he originally installed the propane lines. By the time both the safety switch and the heater had been turned off the flames had melted the edge of the heater. I immediately wanted to buy a new heater but Michael checked it over once it had cooled and said no serious damage had been done. Just forgetting to tighten that hose could have burnt the bus down or cost us our lives!

Another instance of human error happened to us on one of the coldest nights of the year. In general a twenty pound propane tank lasts for about two months in the summer months but only a week in the winter. If there is a really cold spell and the heater is on all the time we will go through all that propane in five or six days depending on how often we have had the heater on its higher setting. Well on a very cold January night after several of the coldest days of the season we ran out of propane at 2am. I thought for sure I would have to get up and turn on the bus to warm us up but thankfully the bus stayed relatively warm. By morning the air in the bus was cold yet we were still warm under the blankets. Fortunately we were in a city and could easily refill our propane tank first thing in the morning. If we had been out in the wilderness it may have been more of a problem.

These are the problems we have had using propane over the past two and a half years. Using propane is cheap, readily available and easy to use for heat, cooking and possibly powering your refrigerator. So far we haven't regretted our choice to use propane in the bus. If you have had misadventures with your propane system feel free to add your stories below.