It’s been a month of hard work everyday and there are more jobs to do everywhere we look. I’m not complaining it is absolutely beautiful here and the more we do look around the nicer it seems. But almost every job we have done turns into a slew of other jobs required just to finish the original job. Progress is very slow and there are more half done jobs here than finished ones. It makes me wonder how the first settlers managed. I mean, I have a bus (with power) to live in but what if I didn’t? I can just make a call and place an order at the hardware store (even with a pandemic going on around us) and then go pick up almost anything I need. Imagine the early immigrants who had to painstakingly chop down trees and cut every piece of lumber they needed using simple man powered tools.  Think about how long that would take! A small town is 11km away from our little cabin. We can go buy groceries whenever we need to but those first settlers, what did they have to eat day after day until they had food from a garden? Even if they hunted,  it would take time away from building. We have pretty much everything we need handed to us! I have a creek here and a well and yet I can’t wait to have a real shower set up. How long did the first settlers have to go before that was even a priority? And don’t say "oh they probably just heated up water" because trust me that is way more tedious than it sounds! I have two pots and even if I fill them with water and heat it up, it is barely enough to wash and rinse my hair. I can see why kids were made to share bath water back in the day. It reminds me of how appreciative of hot water I was getting into town after days of hiking.  I wonder if I’m just so used to taking too much that I am less appreciative of my pots of hot water than an early settler would have been.  I’ve already decided that I only need hot water from my shower head and not my kitchen sink. I’ve spent the past four years heating up water for dishes on the bus and it hasn’t bothered me at all.
Anyway, so what have we accomplished in a month? I took the stain off the inside walls of the main floor and resealed it while Michael was fixing the tool sheds or as I am calling them the man area. 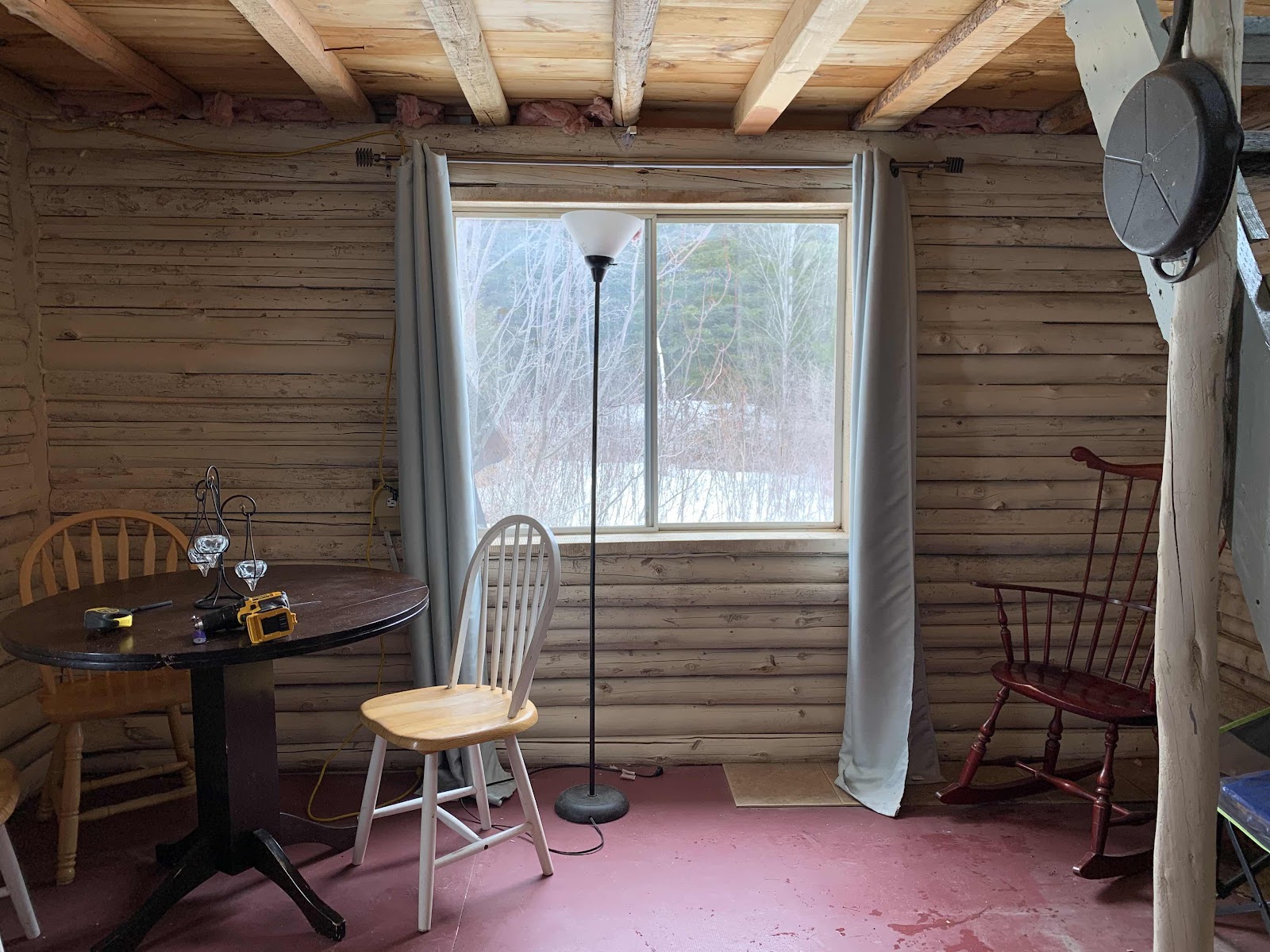 This is what it looked like before with a solid colour stain on the walls. 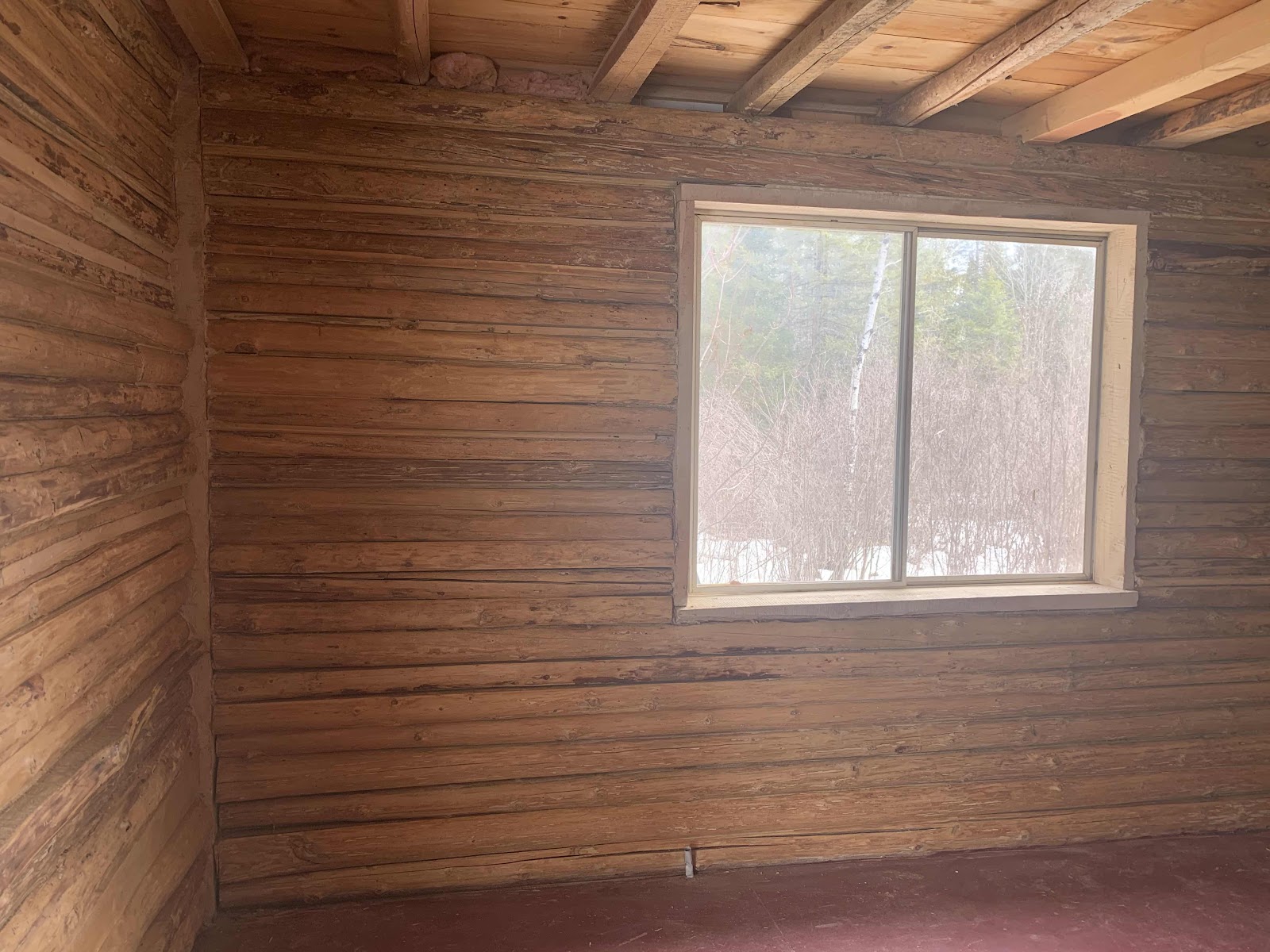 This is what it looks like now with a cedar stain.
Michael took down the roof of the "carport" because I wanted a greenhouse but once the roof was off he realized everything needed to be replaced. So now I have a brand new "greenhouse." It’s not entirely enclosed yet but I’m considering it a finished job. 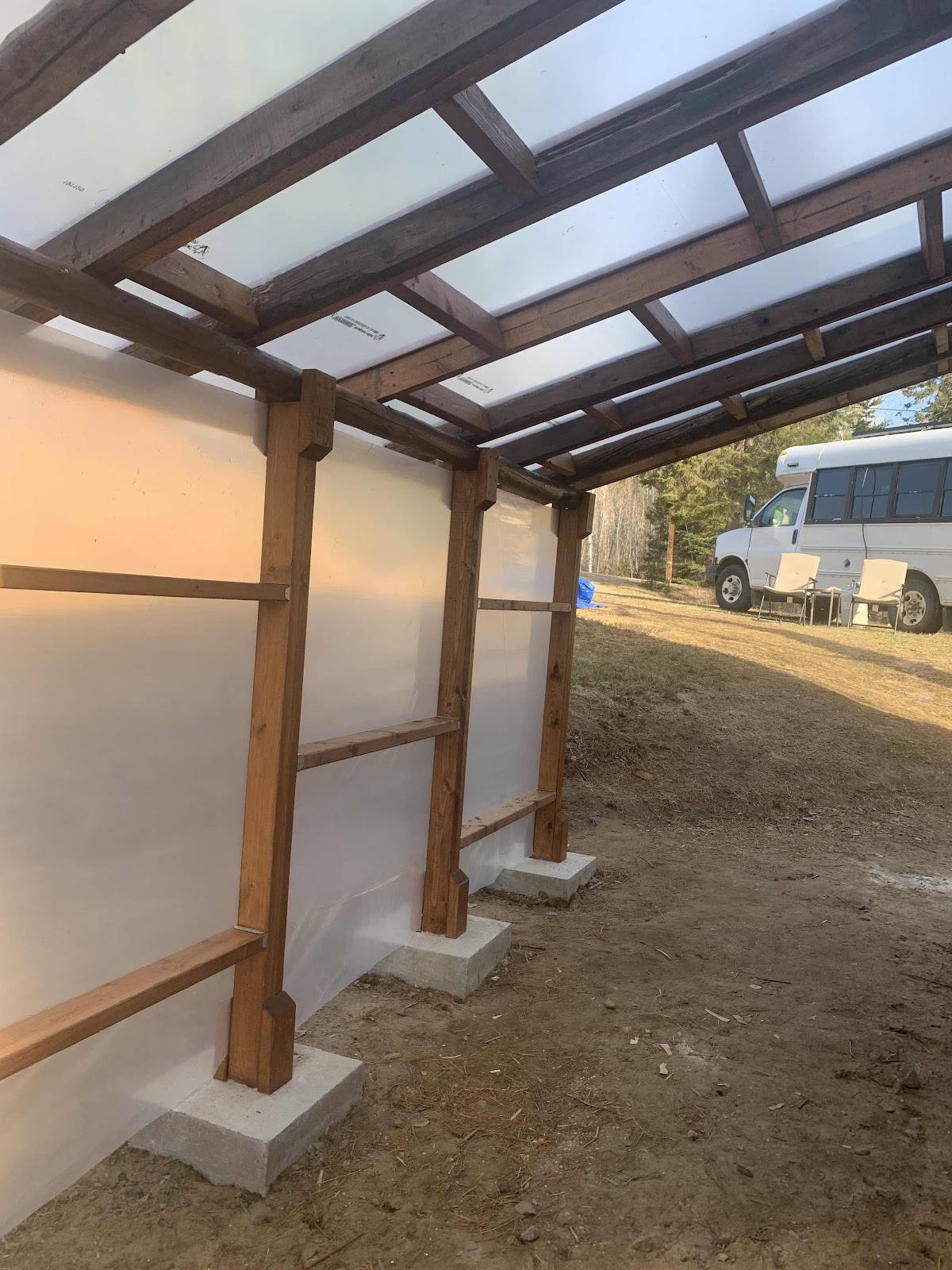 My new greenhouse! It still needs to be closed in but is good enough for now.

A good friend of ours came and helped for two days and was the first person to actually sleep in the cabin. We left him with the heater from the bus and it was so warm he had to get up during the night and turn it off. That’s a good sign!
The first job they worked on was levelling  the cabin. Some of the supports were in rough shape so Michael had made concrete pads for everything to sit on ahead of time. 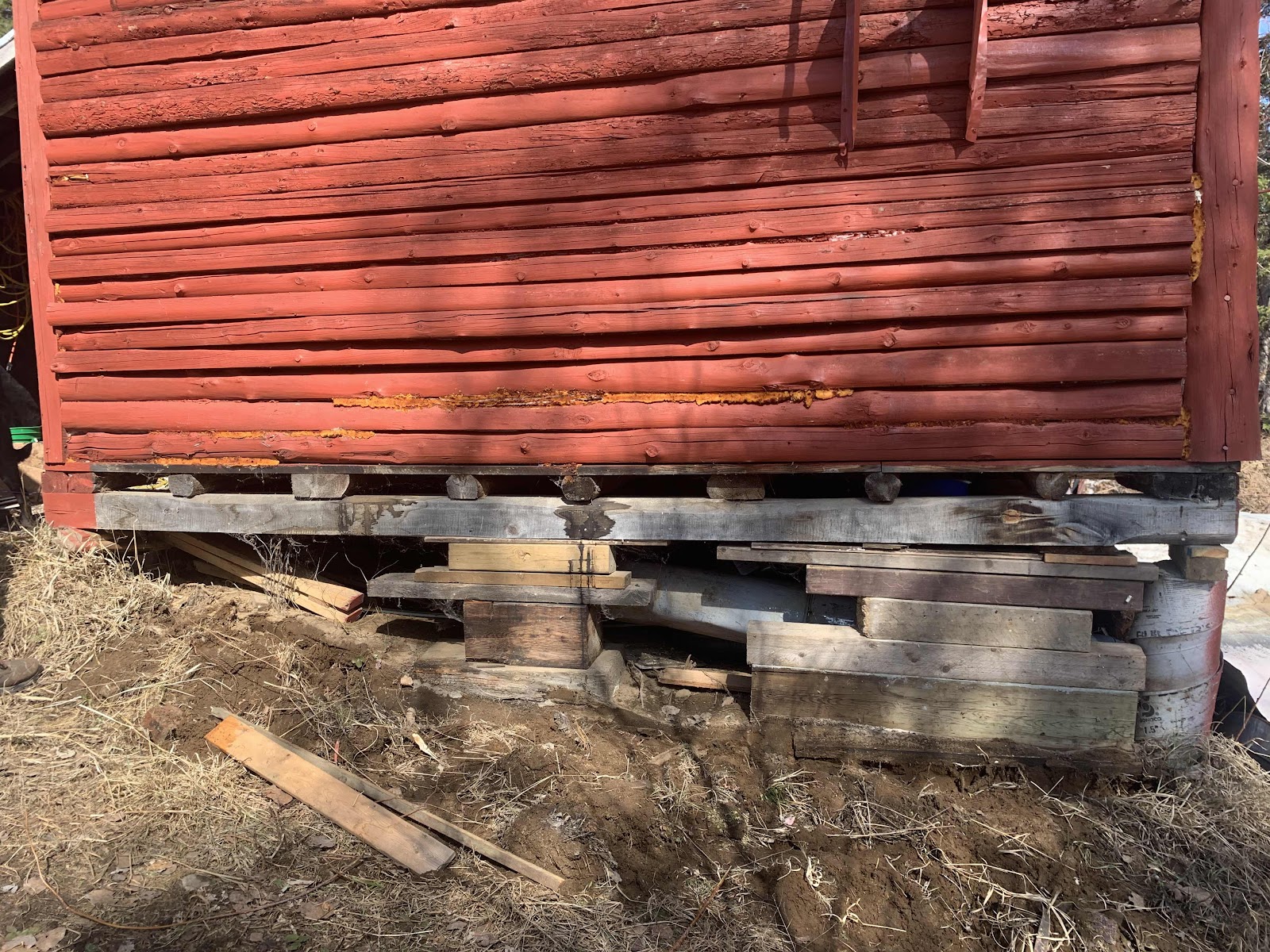 The cabin wasn’t level and was sitting on all of this. 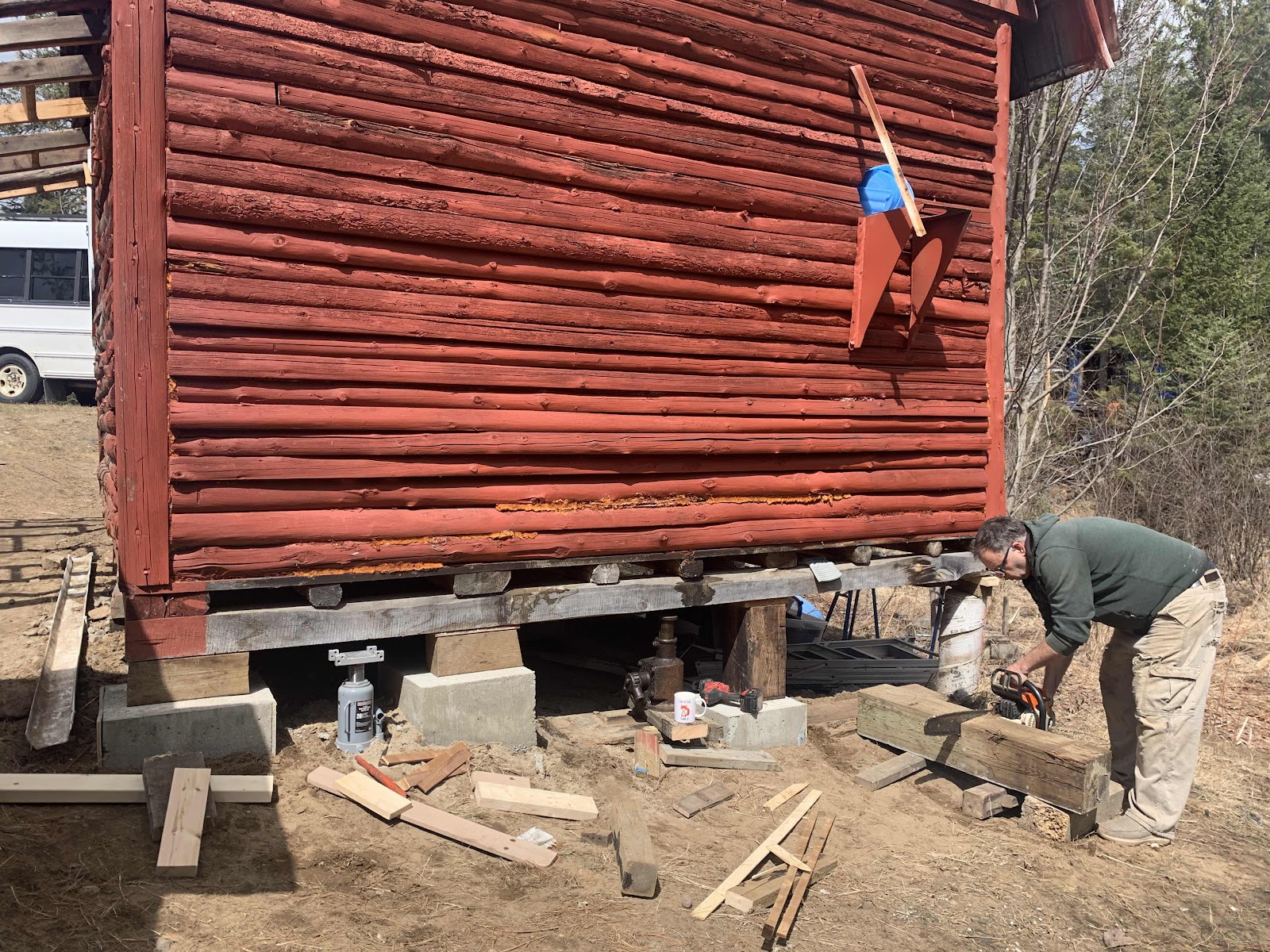 Now the cabin is level and is sitting on cement pads. There is still more work to do in the future but everything is stable.

Next the big, bulky staircase was taken down and our friend offered to make a new set of stairs that won’t take up any floor space during the day.  Awesome! Thanks! 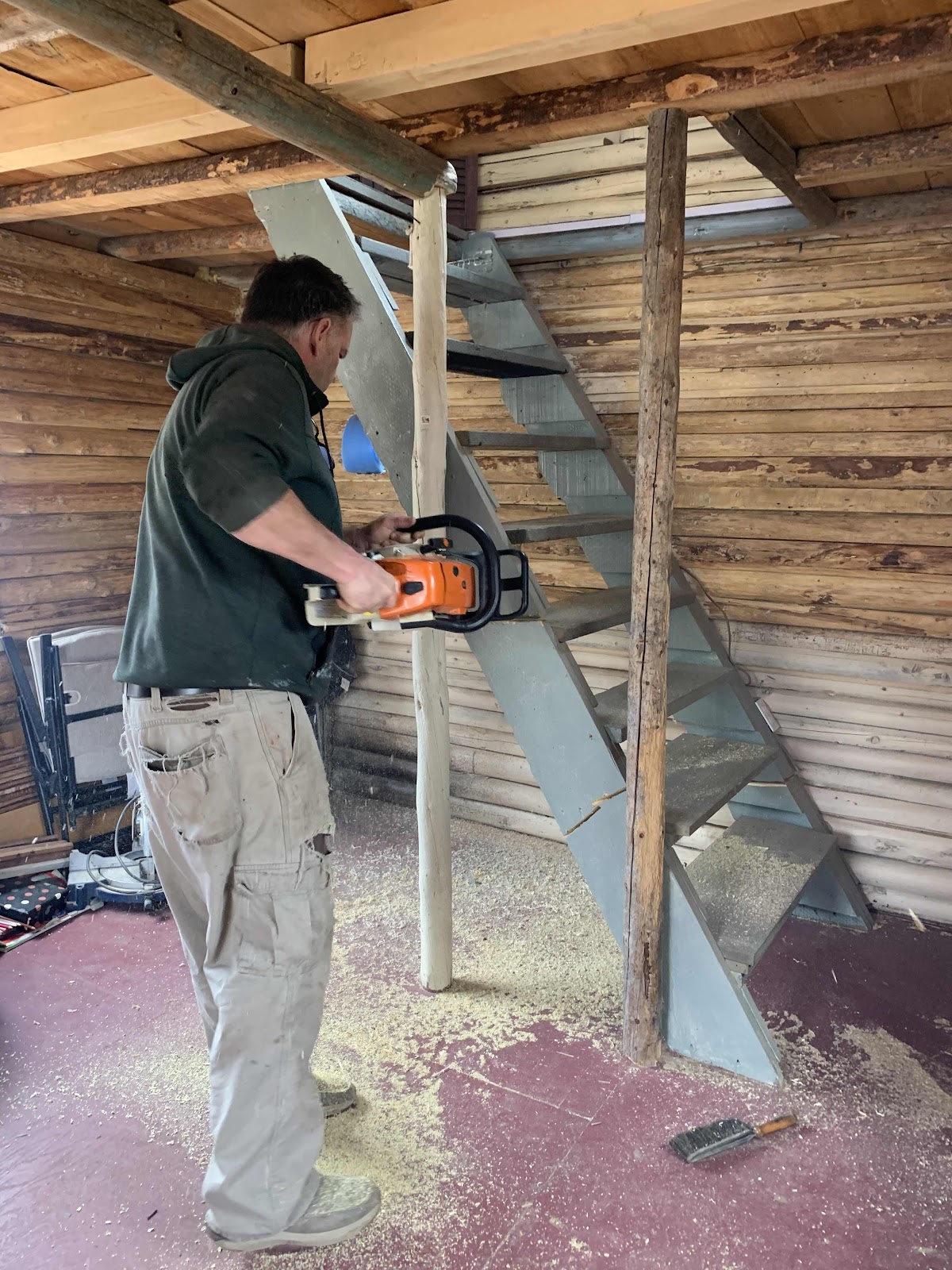 The bulky staircase has to go!
A few of the support beams inside needed replaced so that was also done with the help of a friend. 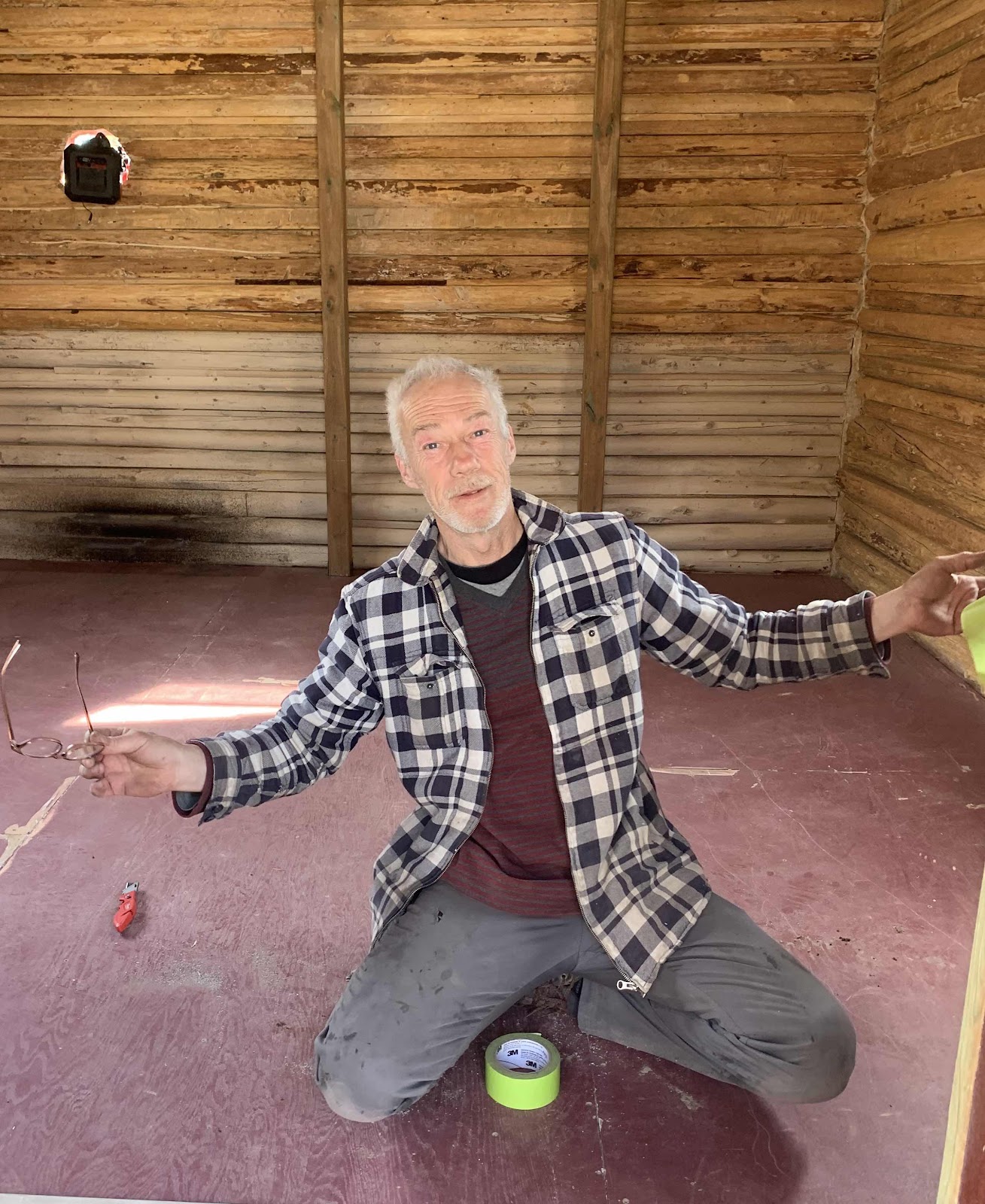 The new beams are behind Michael (and above him). This picture also shows the contrast between the new and old stain. The old stain is where the counter will go and will be completely hidden.

While Michael was working on replacing the beams he noticed the "nice" flooring upstairs that was being hidden by sheets of painted plywood.  It looked like inch thick pine and so I  destroyed the plywood floor upstairs only to find a floor that had been pieced together from beam to beam with short pieces of pine. Ugh! I should have left well enough alone! Upstairs wasn’t even a priority and now the plywood needs to be replaced! Several hundred dollars (not in our budget) later we now have a new plywood floor that we have sealed and will use as is for now. 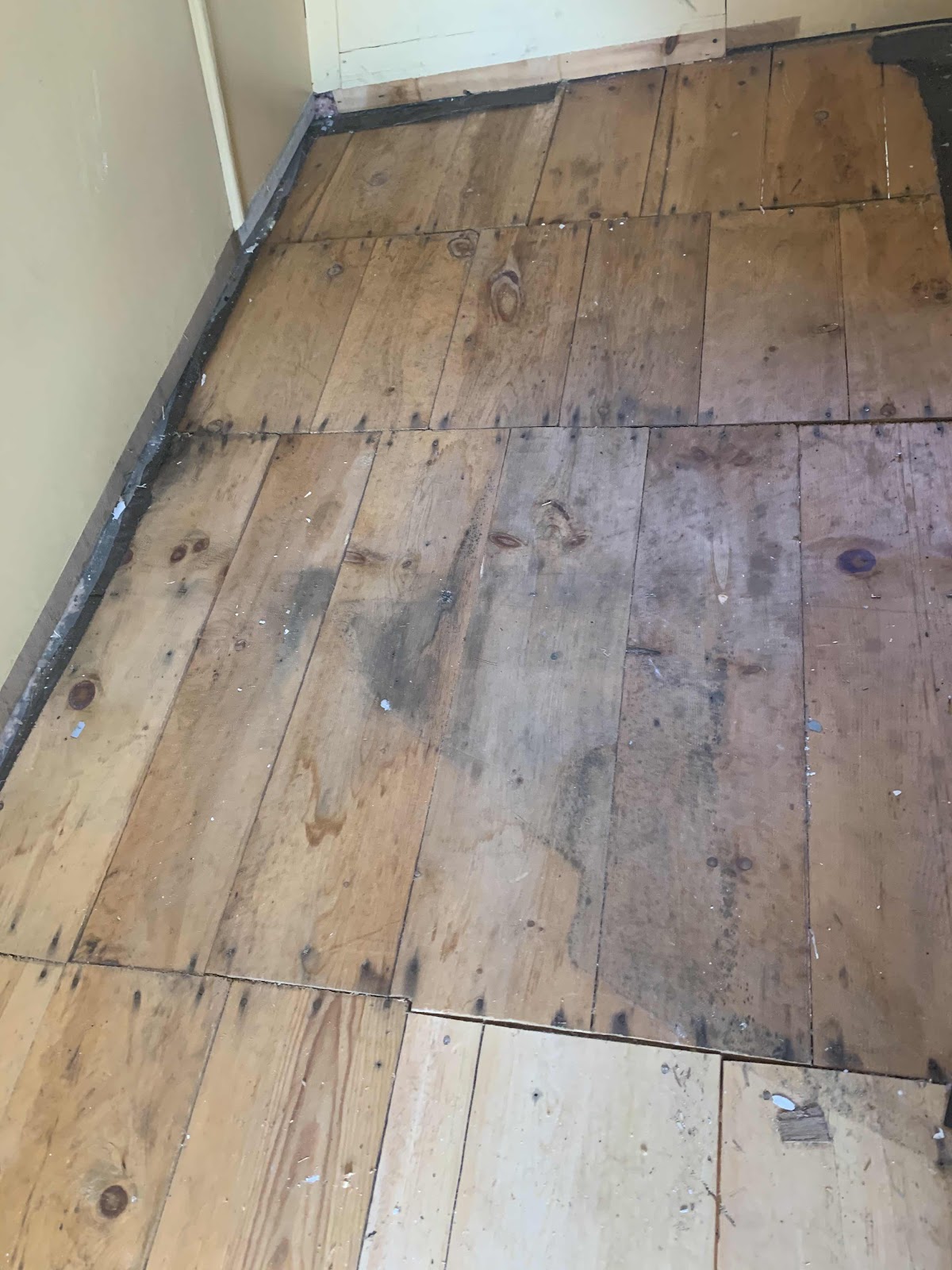 This is what I discovered under the old plywood.
We spent an afternoon installing flooring downstairs. It’s not exactly the colour I was looking for but during a pandemic you  take what you can get! It looks great and finally feels like we’ve accomplished something! It feels like we will have a cabin kitchen in the near future! 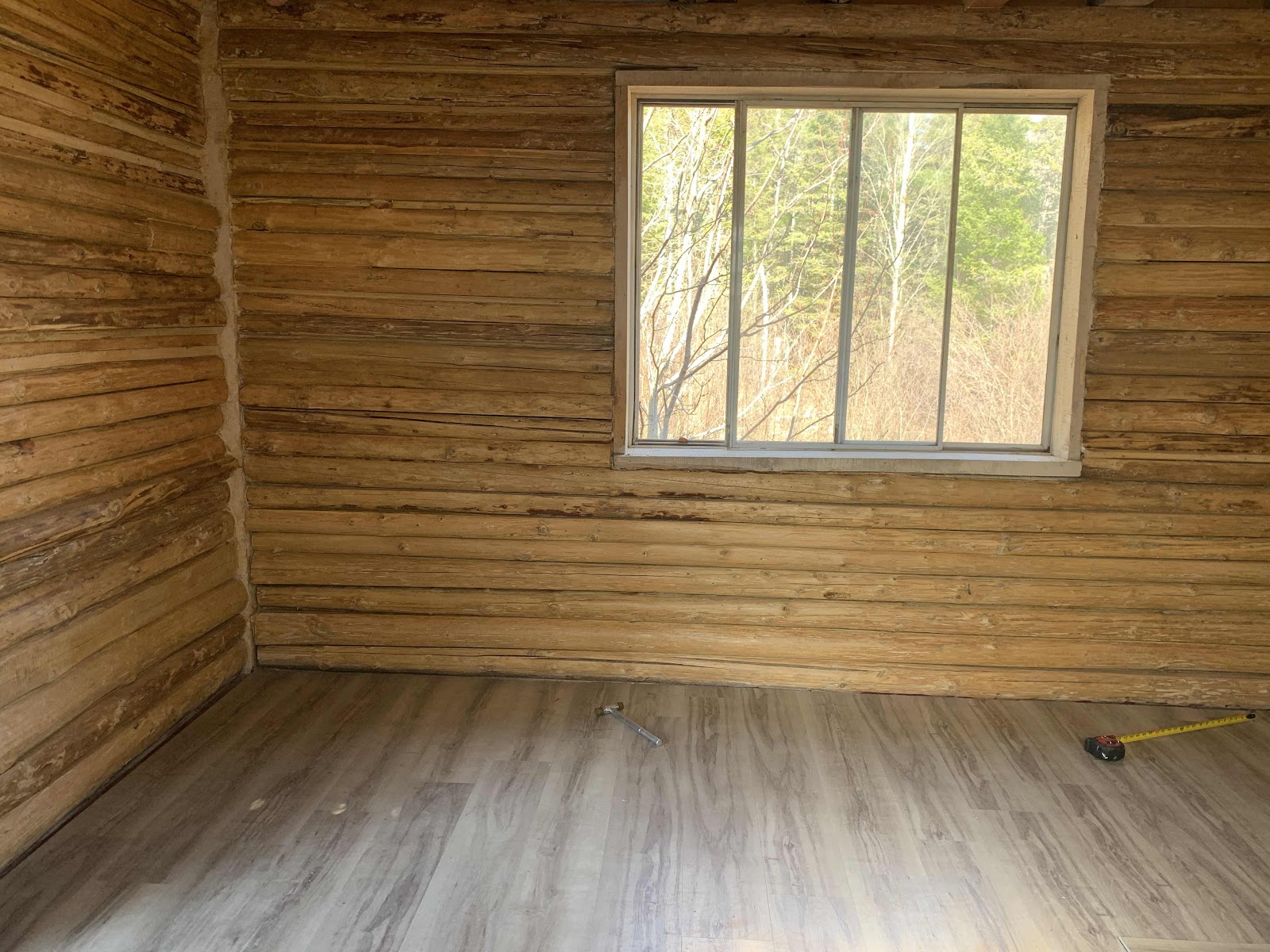 New floor on the main level.

And I know this is silly and wasn’t a priority at all but there was a really ugly door on the outhouse and I thought it would be a simple job.  There ended up being so many coats of paint on it and took longer than I had wanted to spend on it, but now it looks great! 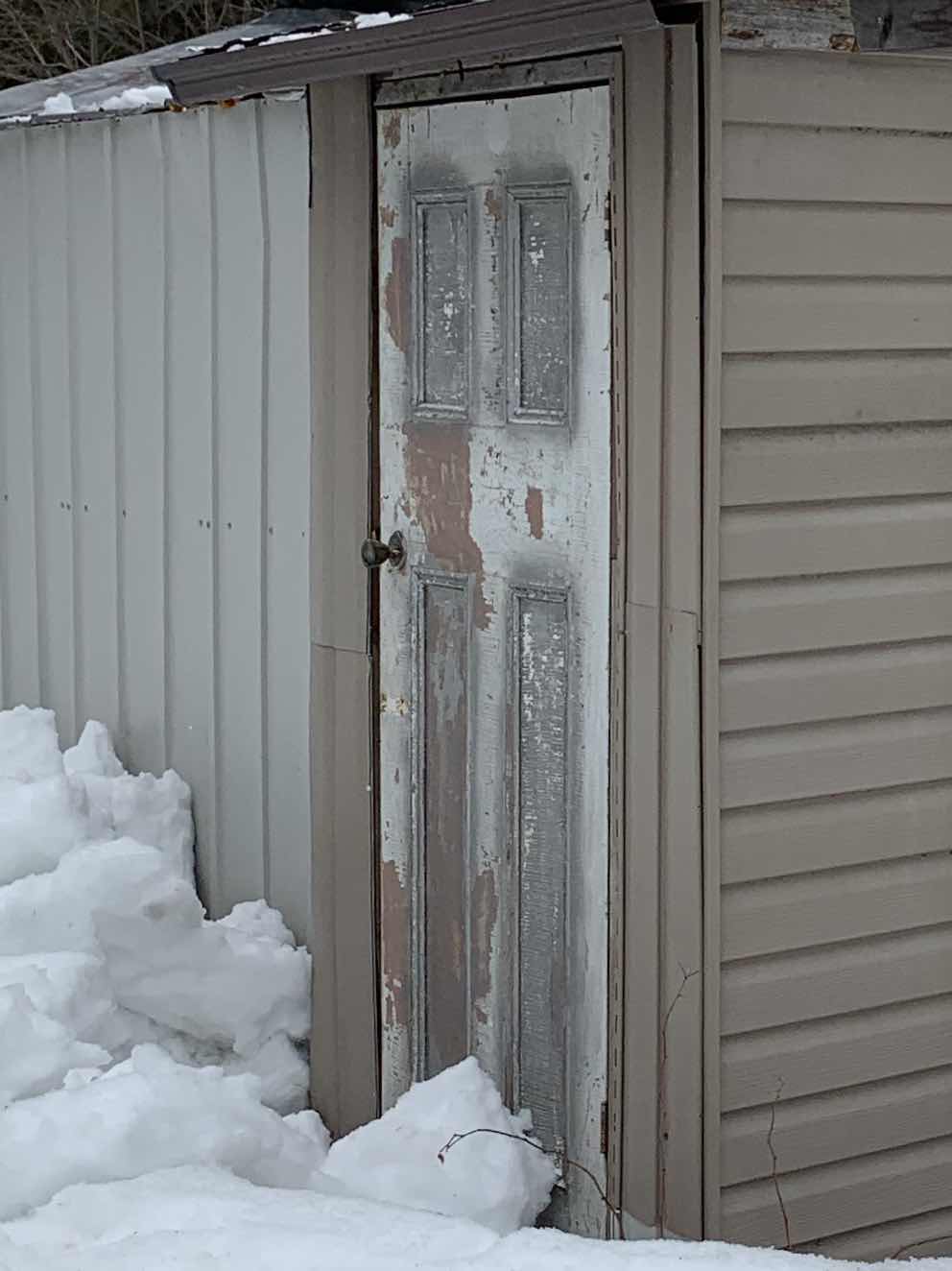 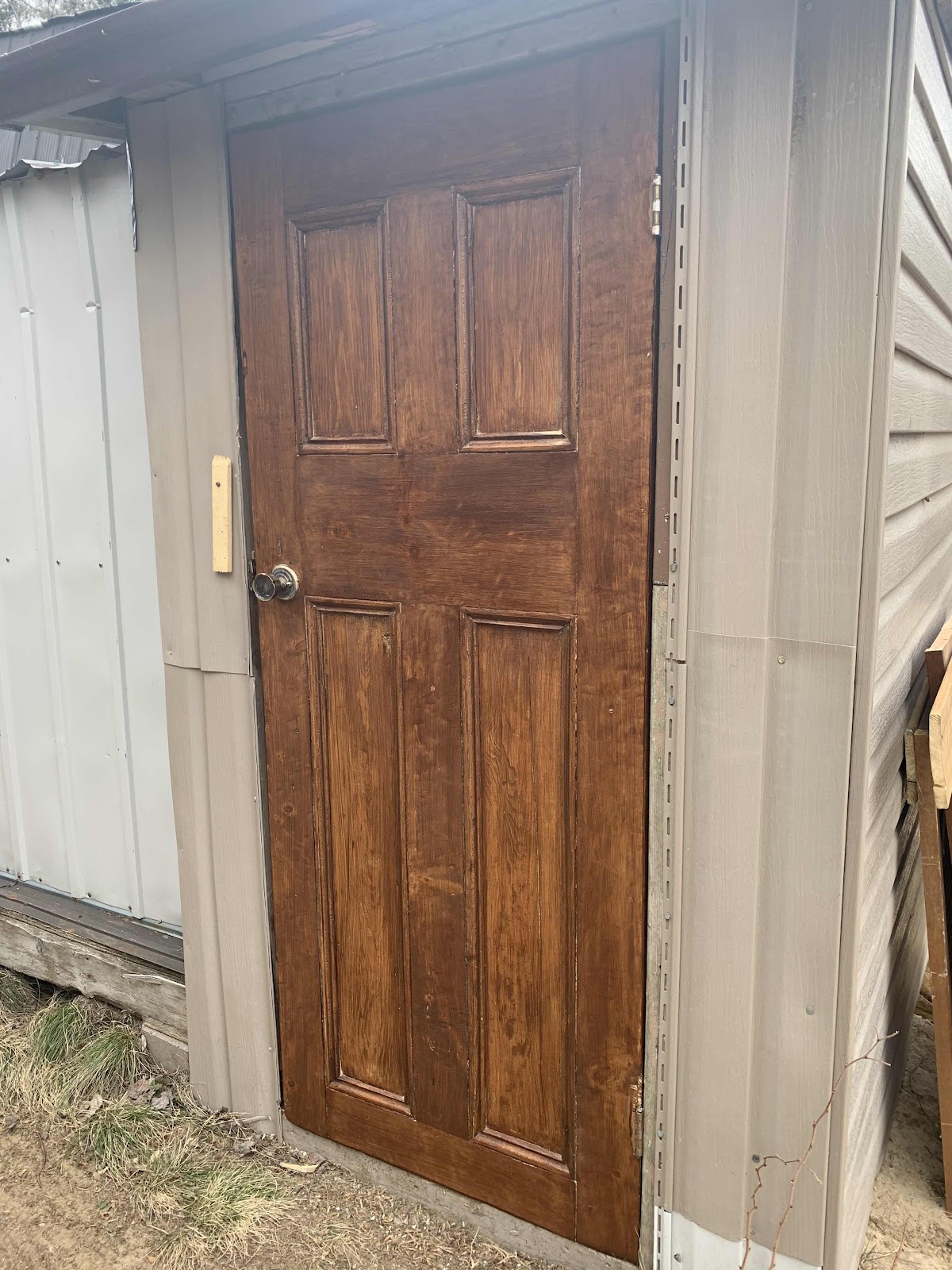 On our breaks from cabin work we have managed to rake up a good portion of the property between the cabin and the road. We’ve found lots of junk here that will need to go to the dump but we’ve also found a wall from an older cabin that has usable cedar logs and posts in it that will be perfect for a retaining wall we want to build between the cabin and the seasonal stream that runs down to the creek.  Michael has also found really old glass bottles here, it makes me wonder about the history of this place.
We have already found raspberry bushes, two types of thyme, asparagus and wild strawberries growing on the property and have been told that there are blueberries that grow along the side of the road as well! We found logs covered in old dried up mushrooms (not sure what kind yet or if they are edible) but we will have fun finding out! I wonder what we will discover here next?
Posted by Unknown at 8:34 PM

Email ThisBlogThis!Share to TwitterShare to FacebookShare to Pinterest
Labels: living off the land, off grid, tiny house