From Bus to A Tiny Cabin 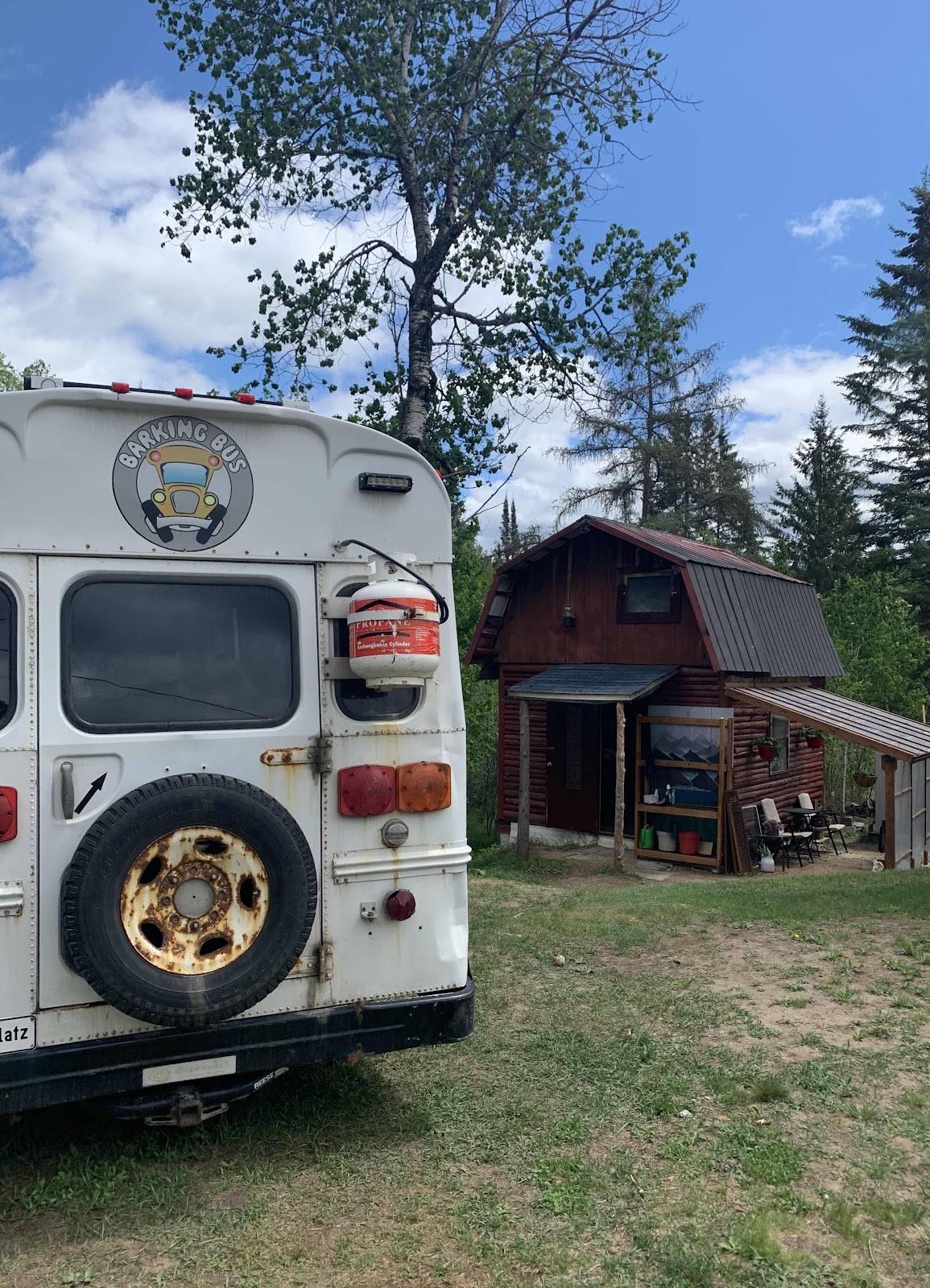 It’s been exactly four years since we moved into the bus and it’s a little bit sad to be moving out of it. We will still use the bus for trips and as a guest room but we are saying goodbye to life in 80 square feet and hello to a bigger living space (144sqft)!
It’s been two months of hard work getting the cabin move in ready but here we are, we have moved into the cabin and I have been decorating! It all started a
month ago when Michael was away helping one of the kids move and it rained several days in a row. I couldn’t do any of the real jobs that needed to get done so I made a picture for the cabin instead. 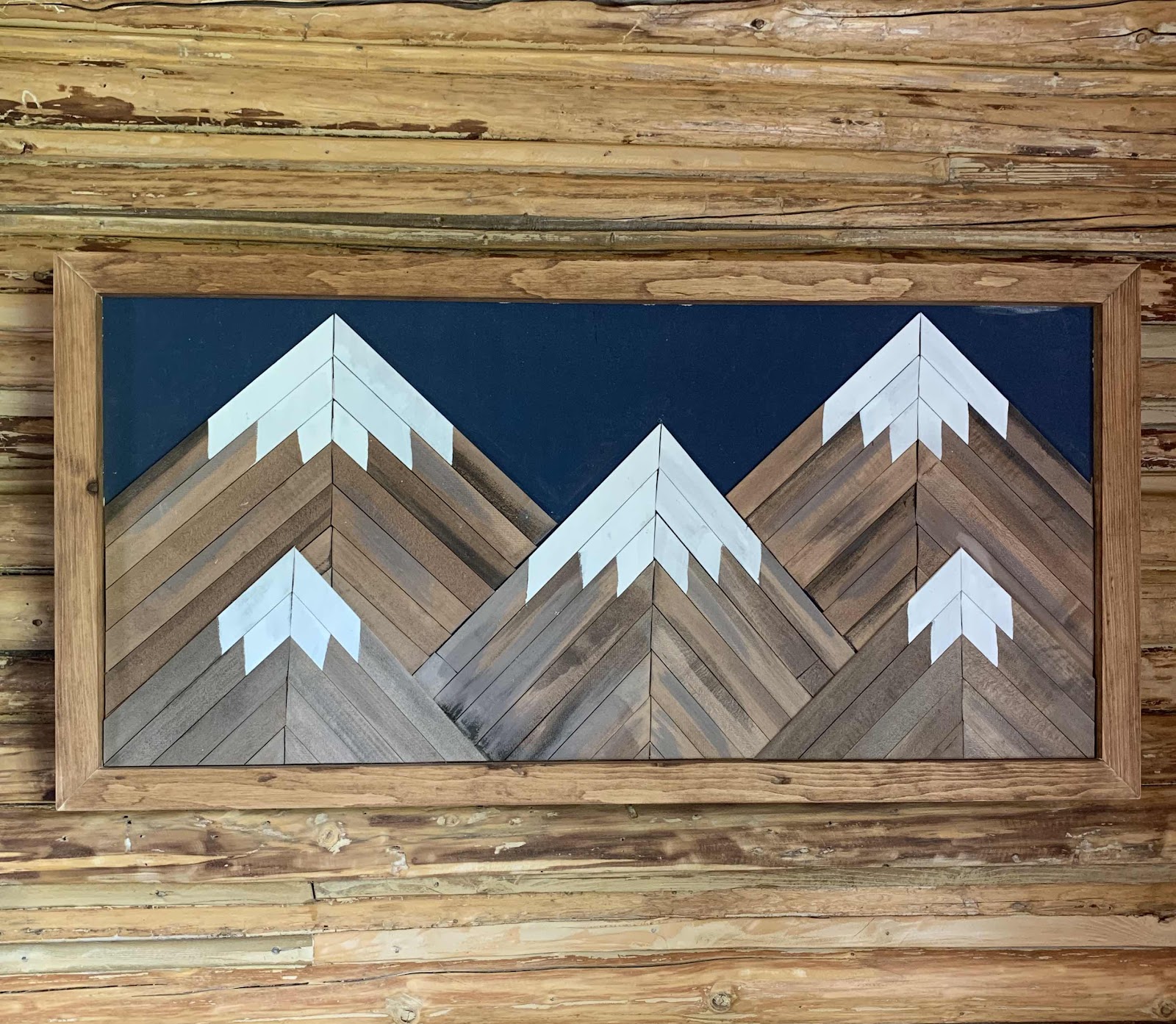 When the weather started to co operate I finished staining the trim for the main floor. I sanded down an old maple table we had in storage and refinished it for our new countertop. As soon as it was done I wanted it set up but the new staircase needed to be installed first.  It was a bit of a chore to sand, stain and seal it and an even bigger chore to get it mounted to the ceiling. 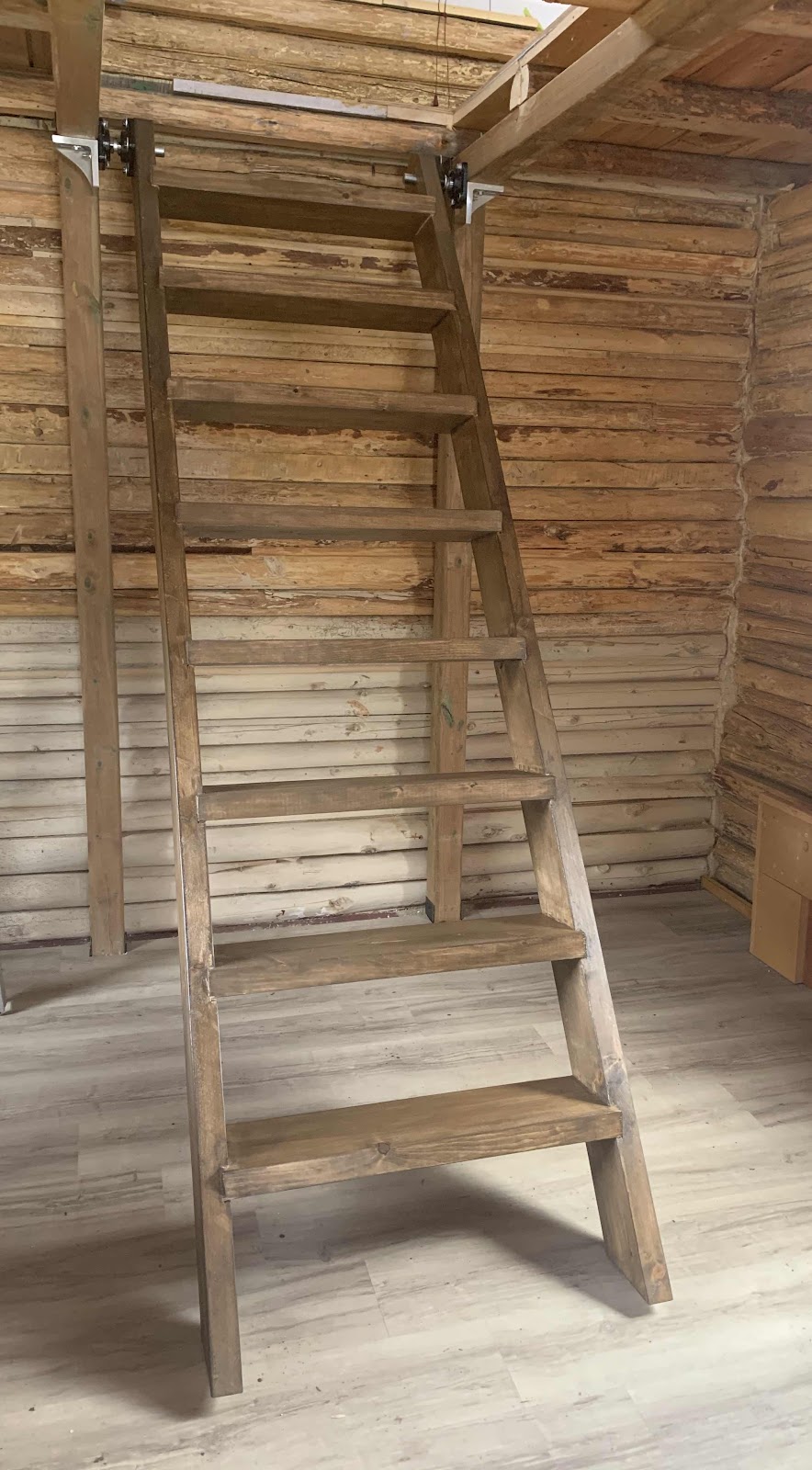 The great thing about these stairs is that they are designed to be out of the way during the day when we don’t need access to the bedroom.  Thanks again Vincent! 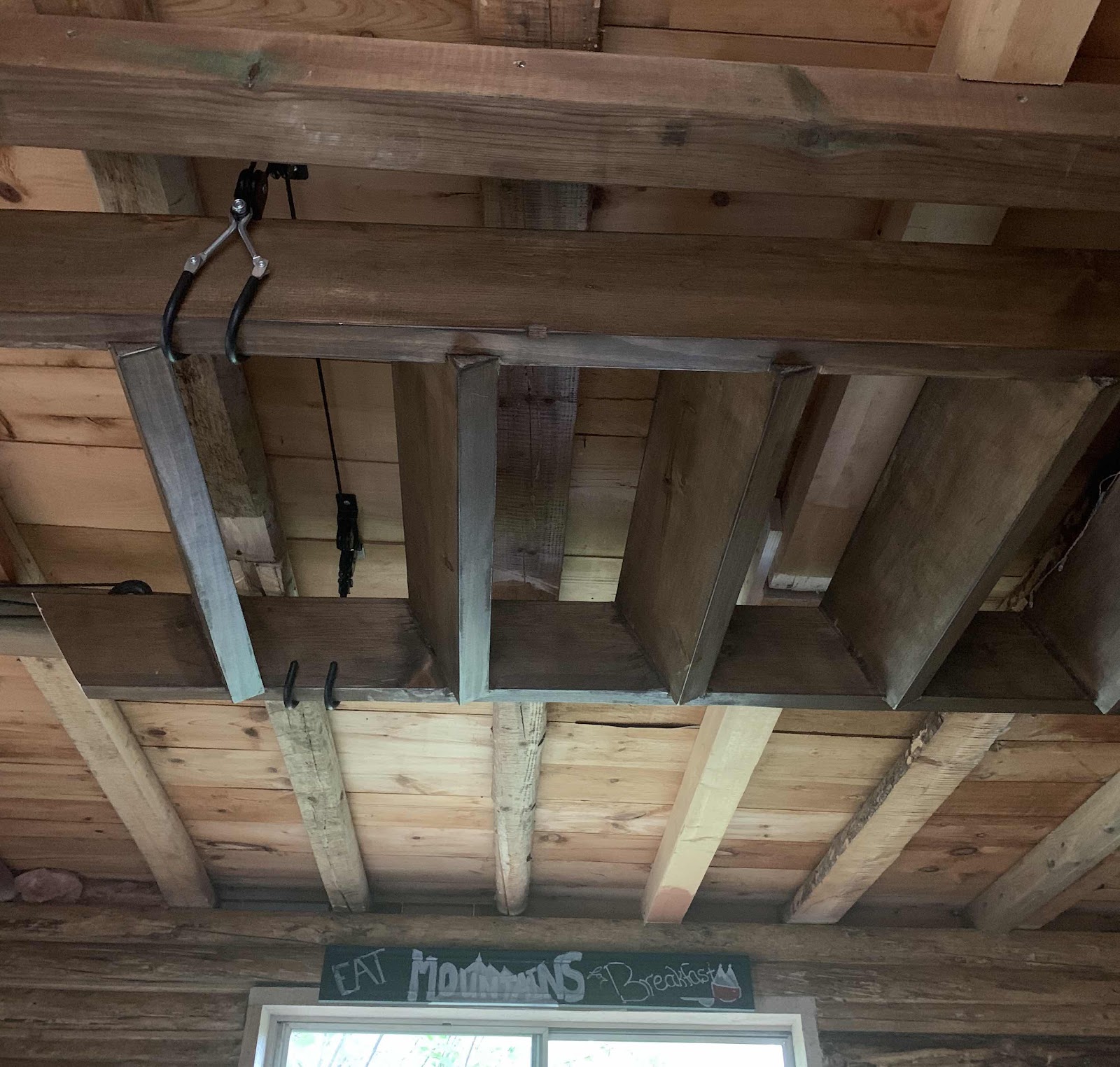 And it’s kind of a cool system! 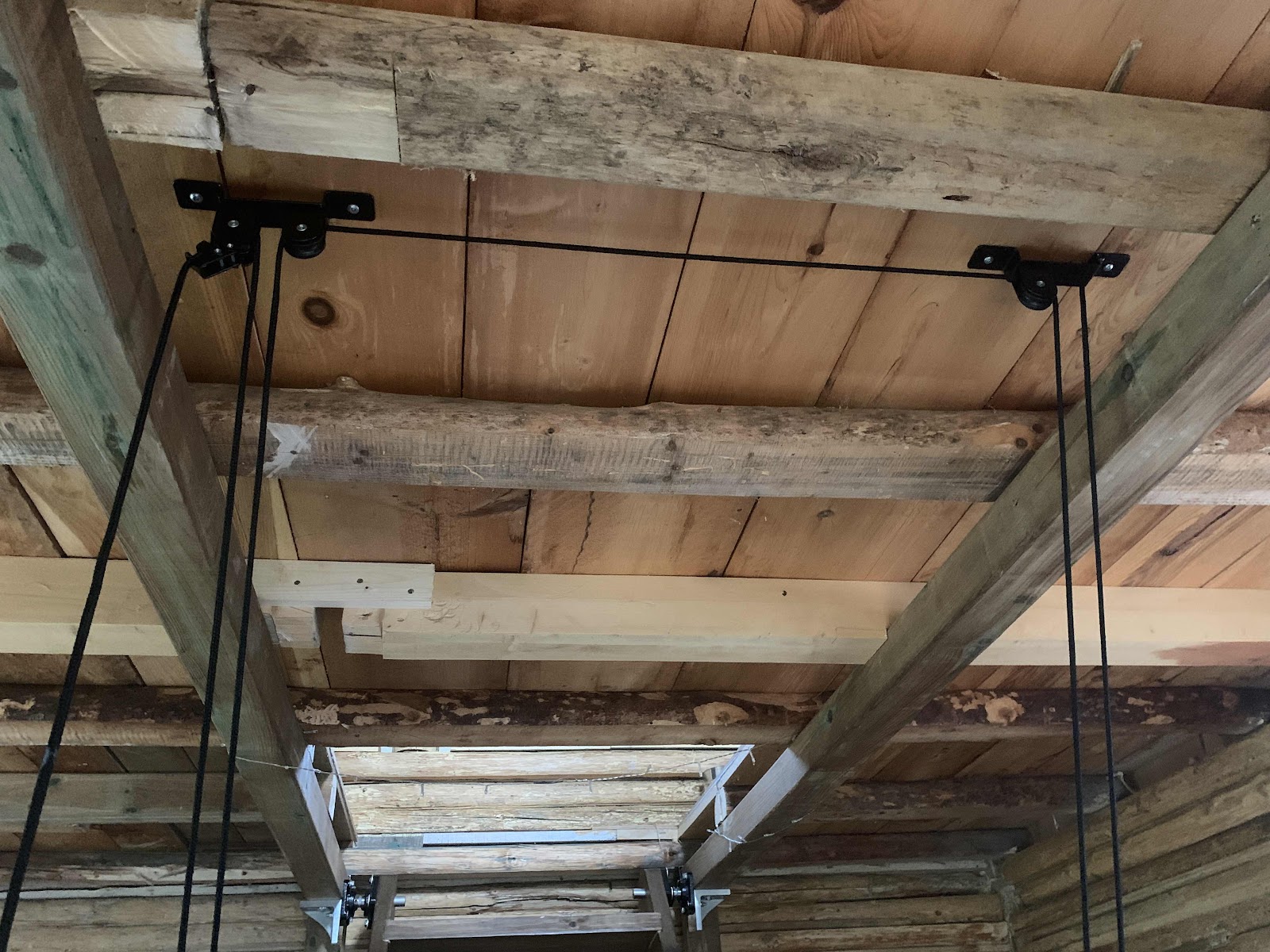 It’s a bicycle lift and it works great! We might just swap out the rope for something stronger and more durable.

Once the stairs were in it was time to set up the kitchen! 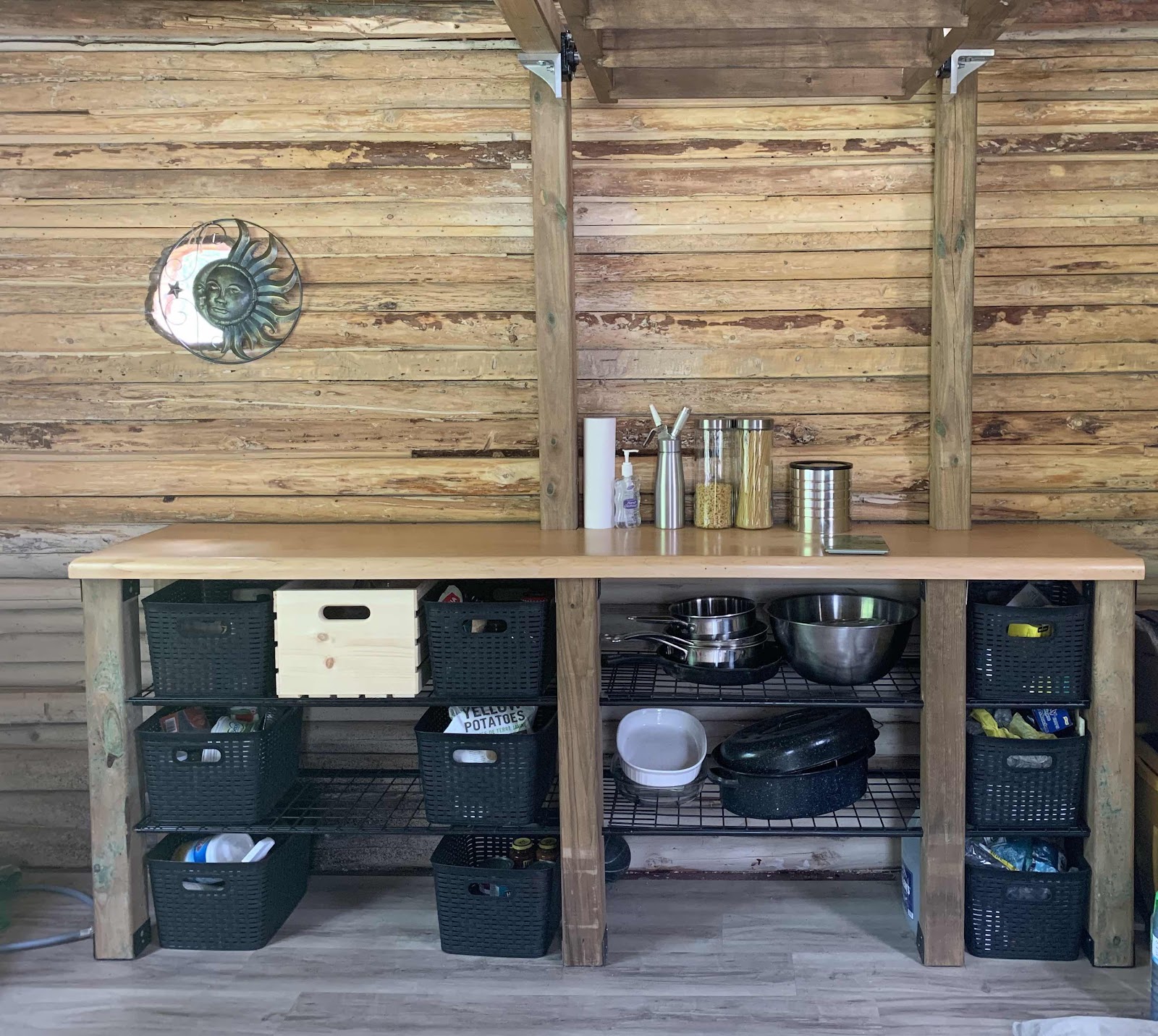 The stove and furnace will be on the left, the sink will be centred between the beams and the fridge will be on the right. I will buy a few more wooden bins and stain them a honey colour. Eventually there will be a shelf above the sink. It’s getting there!

We already had the countertop ready and the shelves are made of metal grid that we also had in storage. I used the grinder one day and cut the shelves for the kitchen along with shelves for a coat and boot rack I made.  We are waiting on a faucet we ordered on amazon before installing the sink and the stove needs a little TLC before we install it.  So for now we are still using the kitchen in the bus as well as the BBQ that came with the cabin.
We do have running water though! Michael hooked up the new pump and mounted a solar panel to set up our water system. We’ve temporarily set up the shower on the side of the cabin but it will eventually be set up in a more discreet location in a month or two once the kitchen is done. 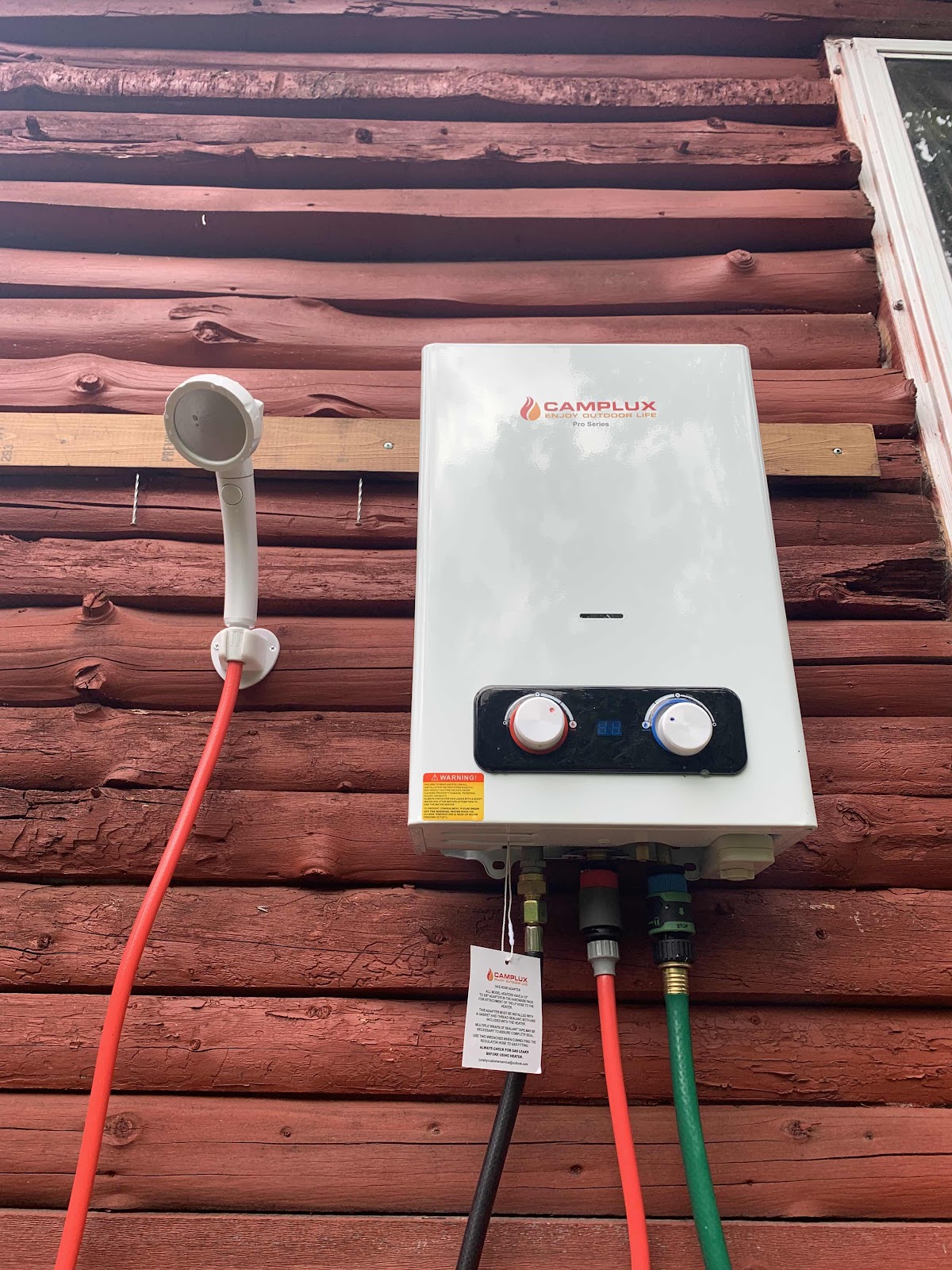 The yard is starting to get cleaned up and the junk pile at the edge of the road gets bigger everyday. I think we will be searching out the local dump soon. I can’t believe the stuff that has been buried here! Everything from kids toys, a fake Christmas tree, a kitchen table from the 1960’s and a lot of smaller items both new and old. Not all of our yard finds have been terrible.  Michael found a giant saw blade and I’m thinking of painting a landscape on it. Michael wants to make it look like a giant saw is cutting into the cabin.

We also had a huge burn pile but with the province wide fire ban it just kept growing. The minute we heard the fire ban would be lifted for the long weekend we started planning the fire pit. To get rid of the pile quickly Michael made a temporarily fireplace and attached chicken wire on top so that we could burn even if it was windy. And burn we did! The first night we got rid of about a third of what we had.  We are still working on burning the rest and soon there will just be a dump pile left!
With the stores closed due to covid19 I decided to start shopping online. Wow! What a difference! Stuff comes right to the door no hassle.... and it feels like Christmas every time the fed ex driver visits! 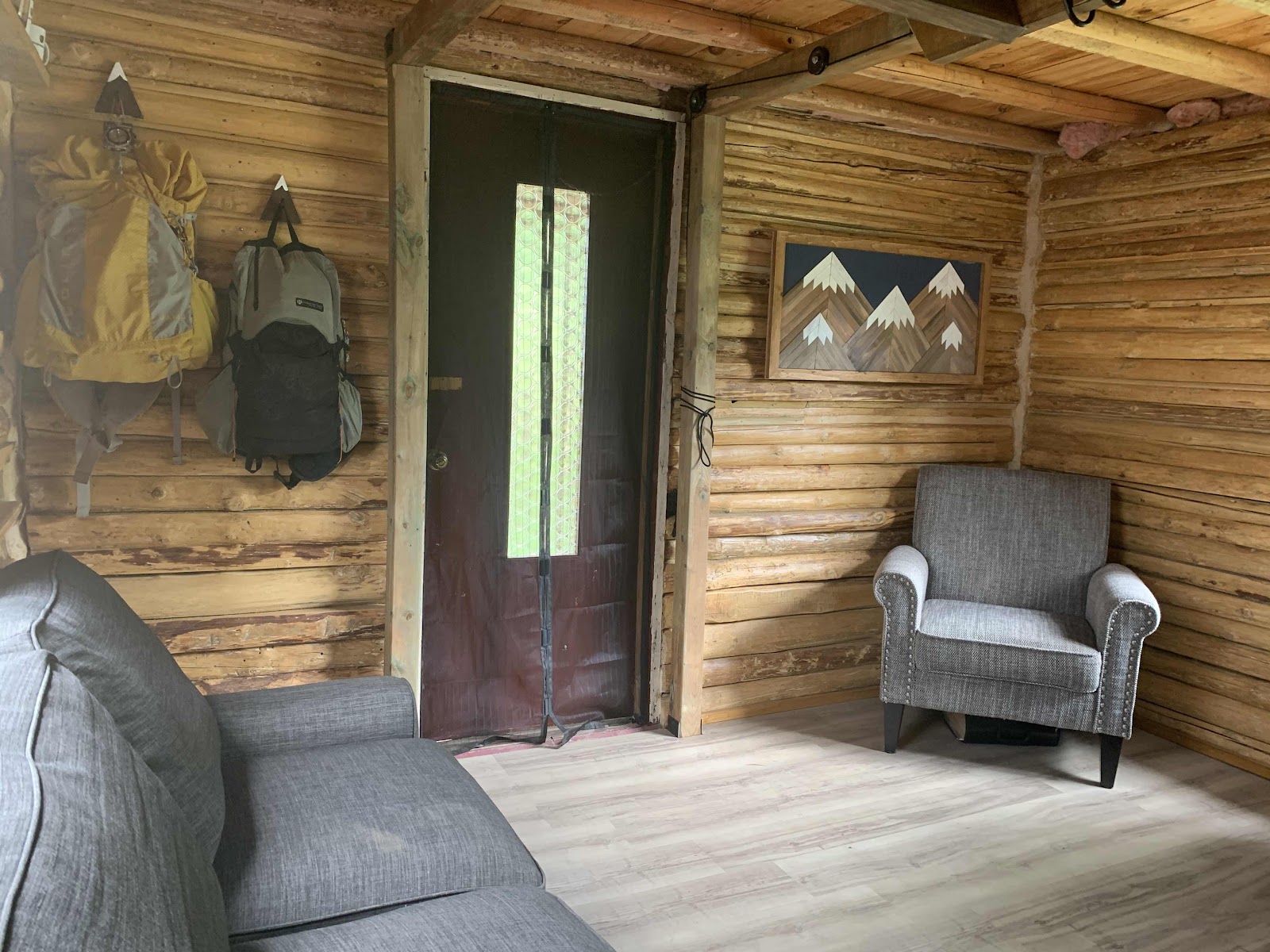 The new couch and new chair are a few of the online purchases. Of course the day after the chair arrived I walked into the cabin to find this guy: 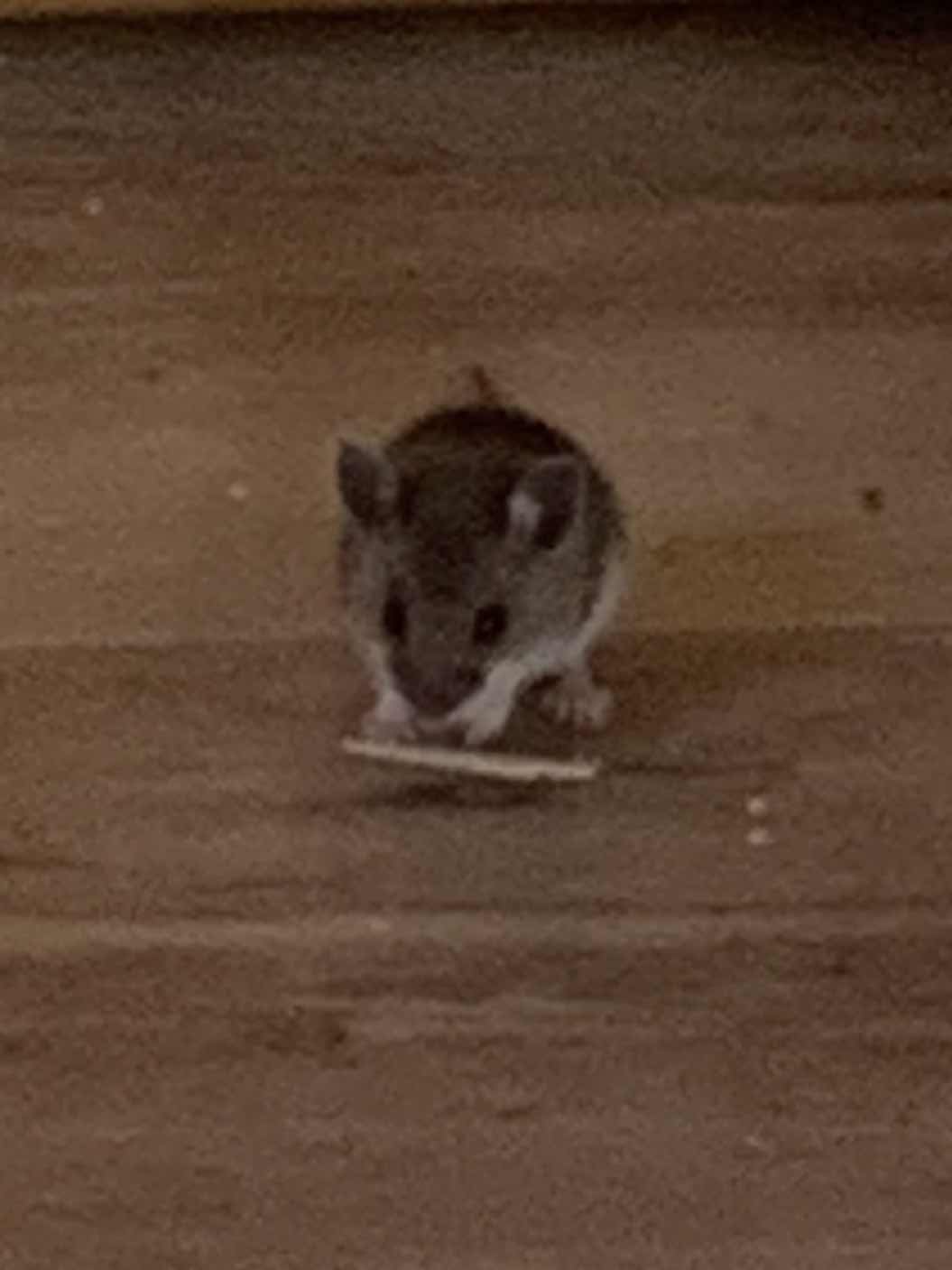 I’m pretty sure he was just visiting though. I’ve managed to scare off the birds and they now longer fly into the cabin and stay a safe distance from the door but I think we are going to have a problem with the squirrels who are always scrambling up the sides of the cabin.

Remember the floor I ruined last month and had to replace? Well we decided that since we put a new floor down upstairs we might as well tidy up the walls as well. After a couple quick coats of paint our bedroom looks exactly how I imagine a cabin bedroom should look. I’m super happy with how it is all coming together! In the future I will swap out the trim but for now it will do. 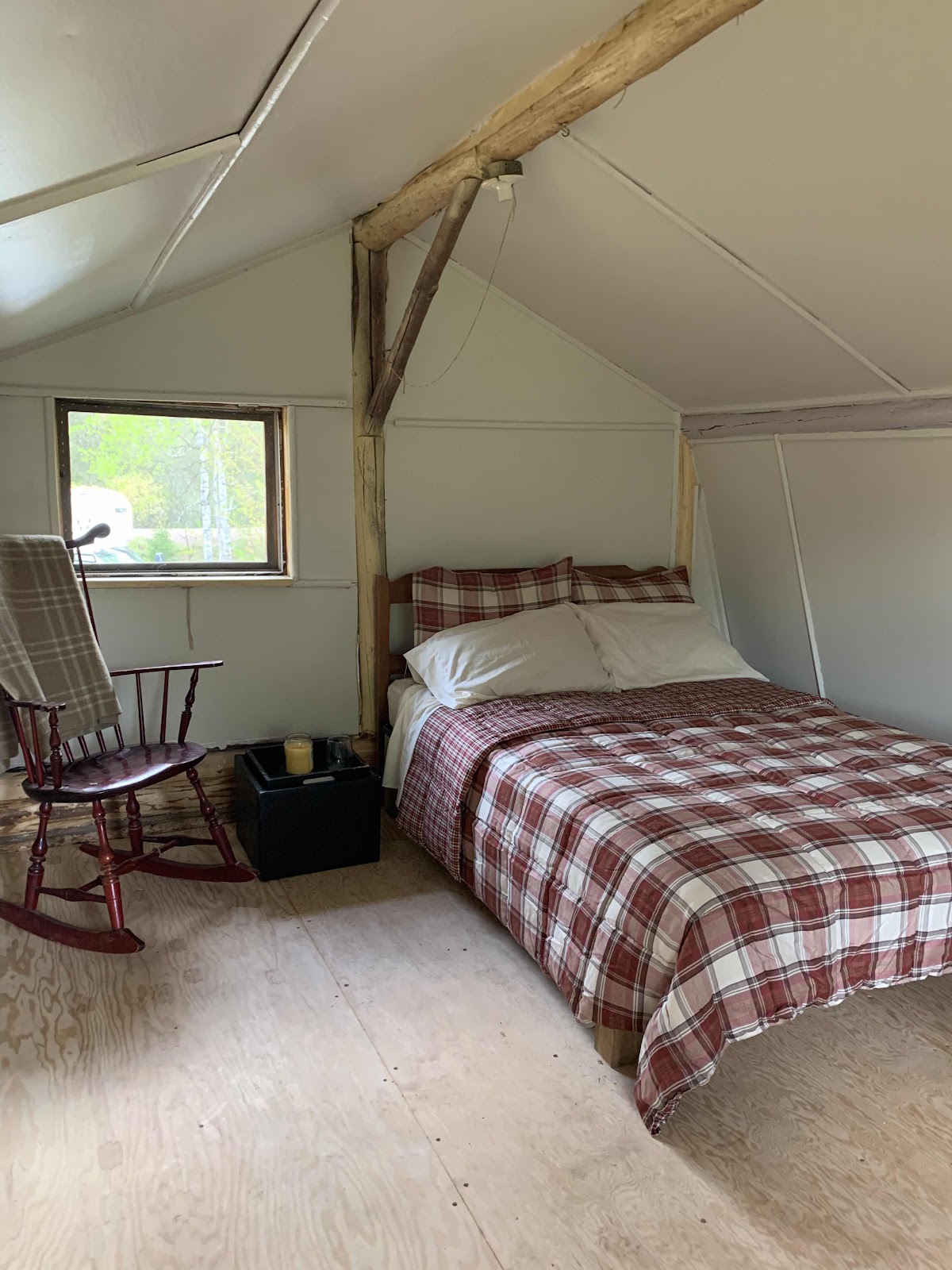 We are still working on the yard slowly. I’ve started planting a garden and I’ve sprayed a garlic barrier spray to keep the mosquitoes at bay. It worked great and there are no more mosquitoes, if only it also worked for the black flies!
With most places closed we haven’t ventured out too much but we have met a few neighbours in passing and the people at the hardware store know us by name. We haven’t even explored the roads near the cabin but I’m sure they lead to somewhere nice because several boats have been trailered past our cabin.  On the one excursion we did take we found the biggest bear I’ve ever seen (about 2km from the cabin) but just like every single other bear he took off as soon as he saw us.  We are both looking forward to a time where there isn’t a job that has to be done right away. Now that we are in the cabin we will slow down  on the rest of the jobs.
Posted by Unknown at 11:59 AM