Day 13 Portmarin to Palas de Rei 23.6km (45.7km so far)
So it turns out that staying in a giant room full of beds (even when all of the beds aren't filled) is a terrible idea! First of all the light stays on till 11pm and that really sucks when you are on the top bunk and the light bulb is just a few feet away. Secondly the snoring! Ok, so Michael was one of the loudest and I am used to him but still! And thirdly, even though quiet time is from 11 -7am people were up and making noise at 6am! Keith said someone even got up at 3am and packed up. Even though I sound like I'm complaining about it, the place wasn't that bad and I did want to stay at a huge place at least once. Now that I've stayed there, we will look for smaller places or private rooms in the future. Anyway, after two rounds of coffee and after almost everyone else had left we headed out crossing a bridge and heading up, up and more up! So far the ups haven't really been that bad and I've been very surprised at my ability to keep up but I was definitely winded today. It's funny because I really expected to wake up with sore muscles this morning. But so far so good. The trail didn't have the jaw dropping views that it did yesterday but we did walk through several little hamlets each with their own churches and interesting out buildings. Nothing seems to be wasted here. We have seen what look to be ruins for sale and laughed only to come across really modern construction being done on an ancient, dilapidated building. Oh and we saw a lot of cows today! We stopped for breakfast about 7km into our day and took a decent break before heading out for another 7 before lunch. We did take a short coffee break at a place where some Americans were over visiting for the summer and had coffee and tea for a donation. Spanish coffee is WAY better than North American coffee, I'm not sure how I'm going to live without it when I get home! When we stopped for lunch Michael ordered pasta for 4€, we expected a small plate and were surprised by the giant full meal he got. For me the last few kilometres of the day dragged on. Not because I was tired or wanted a break but because I was dying to use a washroom and the Camino is so busy and you can't just easily get off the trail and go like on the AT. I practically dropped my pack and ran when we came to the first albergues. We didn't end up staying there though, it was already full but we found an amazing place where we have a room to ourselves with our own private washroom and shower! When we asked the owner where we should eat he pointed across the road. It obviously isn't where most pilgrims eat, there was no pilgrims menu and the proprietor didn't speak English but the place came recommended and had a fire in the fireplace so we stayed. The place was amazing! As we were trying to figure out the menu the owner suggested something we didn't really understand but we agreed. He made us a three course meal that clearly wasn't on the menu and it was spectacular! It made me feel guilty for not making more of an effort with my Spanish. We did our best to try to make him understand how much we appreciate it before coming back to the albergues. There the owner (Manuel) was busy helping the new arrivals which all happened to be on horseback. He was showing them where to keep the horses for the night. How cool would it be to travel across Spain on a horse! Michael has been making friends everywhere he goes and just came back to pick up our credentials (Camino passports that we get stamped everywhere we stop) because he just met a priest who was closing up his church and is waiting for him to get back to give us a stamp. There are so many details I know I am leaving out like how Manuel called ahead to an albergues for us and reserved our space for tomorrow night or how the guide book has really hilarious tidbits of history in it (today's had Dina doing reenactments while we were going through the woods). Even though it's still light outside I'm totally exhausted. Good night world.
Ps. I love Spain! 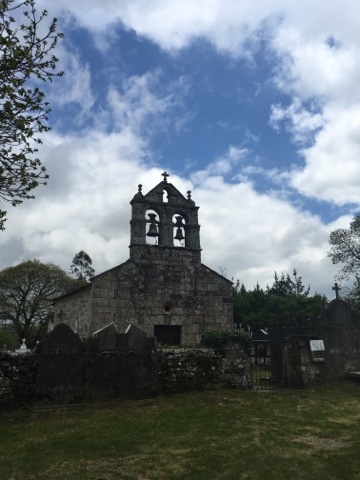