Day 4 - Munich, Germany
I woke up before anyone else but was hesitant to leave without bringing Michael who has been our translator and spokesperson. I only needed to go to the bakery and stop at the grocery store for cream and sugar. Cream by the way isn't refrigerated and comes in tiny glass bottles. I waited for Michael and we ended up buying enough for a picnic lunch for later. Today is castle day!  We headed towards the Austrian border to Neuschanstein and Hohenschuangau castles. The drive was beautiful! We couldn't believe the difference the mature trees made along the highways. We passed so many farms and they all looked neat and tidy. It felt so good and exciting to be driving towards the alps! I tried to take as many pictures as I could of the traditional Bavarian homes we passed with the mountains in the background. It's funny how many pictures I took as we approached the castles only to discard them later for better pictures taken later in the day. It's free to roam around outside of the castles but there are paid tours for inside so we bought tickets and then headed down to the lake to wait for our first tour. Everything here is picturesque. Inside the first castle (Hohenshuangau) which was built on the remains of an older 13th century castle and owned by King Maximillan 2 of Bavaria was much homier than the second castle (Neushanstein). Every room was painted a different colour and instead of tapestries the pictures were painted directly on the walls. The queen's living quarters were on one floor and the Kings the floor above. Even the kids had their own floor. It's really too bad we weren't allowed to take pictures inside the castles.  Neuschanstein which is one of King Ludwig 2's castles (son of King Maximillan) seemed too ornate in comparison. Every room had too much going on with intricate details in all of the marble and stone and tiled floors. The walls were covered in pictures. And every square inch of the place has some kind of picture or design carved or painted on it. The castle had running water, a central heating system and telephone! It was cool to see but hard to imagine ever living in a place like that. It was also a little disappointing in that we only got to tour a small part of the castle. The castle was never finished and we only saw the rooms that had been completed. After the tours we went for a ride on an extremely narrow road up a mountain and then decided to take a different route home to see more of the countryside. We came back through Austria! We parked close to the apartment but walked to a local cafe/bar for a pork and dumpling dinner. I'm not a beer drinker at all but I've enjoyed the beers I've tried here. Even though we were all exhausted we managed to stay up at least another hour in bed talking. Good night world! 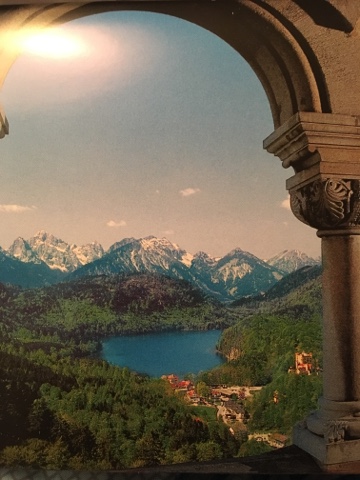