Day 3 - Munich, Germany
We woke up to Dina making us bacon and eggs for breakfast and after the second round of coffee we all started to get ready for the day. Last night we all agreed to go see the things here that were nowhere else in the world first and then add in anything else that caught our interest. Unfortunately that meant that we would be starting our vacation with a trip to Dachau Concentration Camp. I know that it's kind of a strange place to visit on holiday but to just ignore that it is here seems wrong too. We arrived and made a very brief stop at the information building deciding to just walk around and explore on our own rather than take a guided tour. I'm so glad we made that decision! It was sensory overload with the information presented to us, I can't imagine listening to someone repeat the atrocities that took place here. As we entered through the iron gate a feeling of oppression came over us. It only got worse from there but at first I tried to shrug it off and took pictures of the watch towers and surrounding buildings. Inside the main building was set up similar to a museum with information stations everywhere. Within minutes I realized that I didn't want to read all of the horrific details and soon I was just glossing over the info and taking pictures of the walls and windows (which reminded me of the old Oakridge building at work). We decided to sit and watch a documentary about Dachau. It was one of the first concentration camps built and the only one to be used all 12 years. It was very graphic and stressed that the staggering number of deaths mentioned were just the reported numbers and that the actual numbers were likely much higher. We were all silent as we walked out of the theatre and I was ready to leave. Outside Dina confided that she felt the same but we hadn't seen the bunkers yet or the crematorium ...so we continued. I didn't actually go into the crematorium but Dina said that it wasn't as bad as she had imagined and that the pictures posted on the signs were more upsetting than the sterile rooms inside. By the time we left all of the muscles on my face hurt from trying to hold the emotions in and keep a straight face.  We drove back to Munich and stopped for a bite to eat and decided to do something more cheerful. We went sightseeing! We drove as close to the city centre as possible and then walked the cobblestone streets to see the cathedrals, churches and municipal buildings. The architecture was incredible and the details amazing. I'm glad I got to see it but at the same time couldn't help but wonder about the people who actually had to pay for all of this and what their quality of life was like back then. One of the churches from the 1300's was kind of creepy and had a skeleton on display and a skull in a box as well as gold covered skeletons as decorations on the walls. We went up the tower at the municipal building though and got to see everything around for miles. That was cool! By this time we were beat and came back to the apartment for a break only to get up and go again as soon as we were hungry. We walked till we found Impler Cafe and Bar where we had a delicious  traditional Bavarian meal with a beer and strudel for dessert. We were surprised when the chef sent us a round of pear schnapps. We had a great night and now it's nearly 11 and we are all already in bed. Good night world! 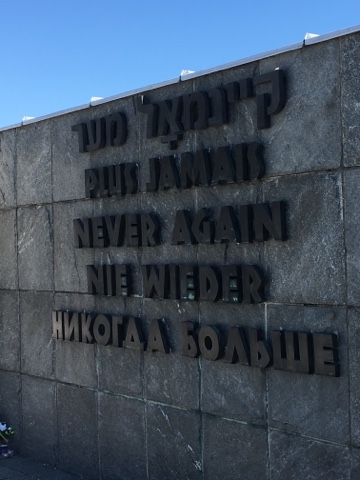