Day 18 Finisterre
We slept in a little enjoying the peace of having a place to ourselves. When everyone was up we went out to find coffee and breakfast. Then we searched for the alter of the sun (Ala Solis) which Celtic Druids had built but we couldn't find it. Next to find was the ruins of a hermitage from the 11th century. After hiking straight up a mountain steeper than anything we encountered on the Camino we arrived just as a local was leaving the site and he confirmed that this was the right place. The ruins were nothing more than crude stone foundations built around giant boulders that we climbed and relaxed on enjoying a 360* view of Finisterre and the surrounding mountains and ocean. It was beautiful! I didn't want to leave! Then Keith started reading from his guide how these rocks we were sitting on were actually known for increasing fertility. Time to move on! Our next stop on the other side is of the mountain was the Abalar Stones, two rocks used in pagan rituals that could move back and forth but only if pushed on the right spot. If a woman could move the rocks, she could be a priestess. It was a little disappointing though because there were no signs and we had to guess which rocks might move. It was so beautiful up on the rocks though that we didn't mind. While we were up there we saw a path below us and decided to see where it went. It took us along the coast and passed above a sandy picturesque beach with rolling waves. The trail was steep though with lots of little rocks, I thought for sure I would fall or slide if I wasn't careful. It led us back to town between two giant moss covered rock walls that were maybe 10-12 feet high. Although it was steep we realized that this is the path we originally should have taken to get to the top rather than head straight up a mountain through thorns and poison oak. We arrived in a section of town we hadn't ventured through yet and were amazed at the little windy roads and narrow alleys that were shortcuts to the next street. Back in town we stopped for a drink at a restaurant and then walked a little closer to the waterfront and stopped again for lunch. After lunch we went back to the apartment where we all fell asleep! Luckily we didn't nap for too long and decided to go check out the beach and dip our feet in the Atlantic! I was surprised by how  soft and fine the sand was and by how many shells there were. The water wasn't that bad although I'm sure if I was actually swimming in it I would feel differently. We sat and enjoyed the waves for awhile and then headed back to clean up before dinner in front of the docks. 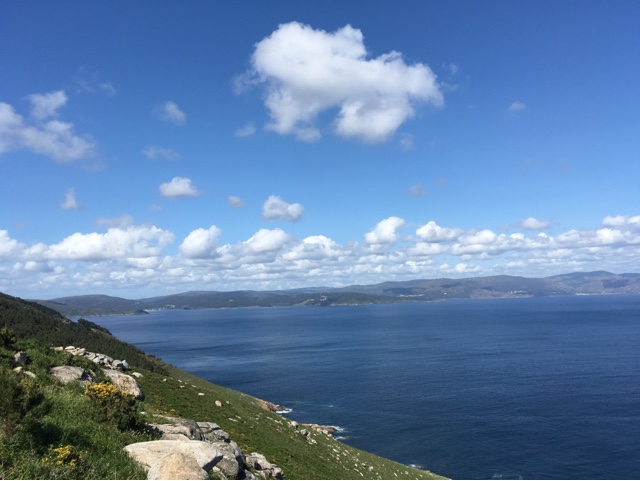