Day 11
We woke up early and made it to the airport just before 6am for our 7:30 flight to Madrid. We flew over some pretty amazing looking mountains! In Madrid we had a few hours before our next flight so we sat and enjoyed a delicious and really cheap (especially for an airport) breakfast. After waiting a bit to board we were finally on our way to Santiago de Compostella! When we arrived we stored everything we didn't want to hike with in Michael's suitcase and checked it into storage. Now that we all had our backpacks on we felt like hikers again! First we had to figure out which bus to take from the airport to get to the train station, remember now the language is Spanish but luckily Dina had really brushed up on her Spanish and did a great job all day long ordering train tickets and later on lunch. The train turned out to be a great idea! Actually we had to transfer and took two different trains but it was a great way to see the countryside. There was so much to look at from the really old homes and churches to the new modern buildings and homes. It was so frustrating not being able to take any pictures (the train was moving so fast that all the pictures turned out blurry). On the second train we had an entire car to ourselves and moved around to different seats depending on which side of the train had better views. We followed a river for awhile that turned into a big gorge with steep hills on either side and scattered along the steep hills were ruins and foundations from a way earlier time. By the time we got off the bus I had already fallen in love with Spain! We got off in Sarria and headed to the old monastery at the top of the hill to get our credentials (passports) and shells to hike the Camino with. The monastery is actually also an albergues (hostel for pilgrims) and we thought about staying there (because how cool would it be to stay in a momentary) but decided that maybe something smaller with less people might be better for our first night. After walking through the town up to the top we had to come halfway back down (we will have to hike back up to the top when we leave tomorrow) to find the other albergues. The first one we entered was also a restaurant so we thought it was perfect. It got even better! After paying to stay (we though above the restaurant), the owner led us down the street and around the corner to an apartment building. We have a whole apartment to ourselves and it's amazing (all for €12.50 each)! After cleaning up a bit we headed back out to find dinner and were absolutely amazed by the place we found! For €8.50 each we got wine and bread, our choice of appetizer (each), our choice of main course, and our choice of dessert. And it was all delicious! We were happy and stuffed when we left to find our way back to our home for the night.  It's way past hikers midnight (it's almost real midnight) but it feels so good to be here. I'm so excited to start the Camino tomorrow. Good night world! 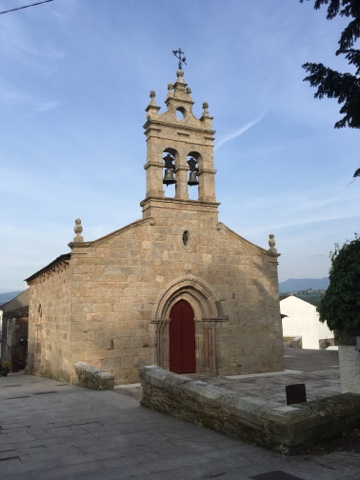