Day 6 - Baltmannsweiler near Stuttgart
Today we packed up and left our cute little home in Munich and headed to the BMW museum. It was mostly for the guys but It was fun seeing all the old cars. Then we left town for the countryside and it was beautiful! I was a little nervous about being on the autobahn especially as the cars zoomed by but Keith is a great driver and I had nothing to worry about. In fact the autobahn seemed less stressful than the narrow streets in town. We stopped at a small town in the middle of nowhere for lunch, the food was great and about half the price we would have paid in Munich. After treating ourselves to a decadent dessert we went for a short walk down the Main Street before getting back on the autobahn and heading to a small town outside of Stuttgart to visit Tina and Mario (Silent and Giggles) who hiked the AT the same year I did and had spent time hiking with Keith and Dina. Tina and Mario live in a small town out in the countryside surrounded by cherry trees and grape fields. Their main floor apartment was gorgeous and way bigger than I had expected and had a really nice landscaped backyard. It didn't take very long before the conversation was all about hiking and reliving memories on the AT. Tina grabbed a big hard cover book and started thumbing through pages and that's when we noticed the book she had made of their hike. It was amazing! I wish I had thought of making something like it. She did a great job, she easily could sell copies and she said she had also make a 2 hour video of the AT. Of course we wanted to watch it right away but it was time to go eat. We drove to the town at the bottom of the hill and met in a modern underground parking lot. Within minutes we were walking on cobblestone and gawking at the traditional Bavarian buildings of their town centre. I took a lot of pictures! Still in the old section of town we headed up a steep hill taking a set of covered stairs. I soon was way behind everyone else (well Mario stayed behind to be nice). Up ahead Dina called down to warn me. She said "remember all those mountains with false summits, these stairs are the same." We all laughed. I wish I had thought to count the stairs but I stopped several times to take pictures of the town below and to catch my breath. When we finally got to the top we came out in a manicured park that was surrounded by castle looking walls and turrets. The place was amazing! We went up a few more stairs to end up on a terrace at the restaurant. We did have to move inside as the food was arriving though because it was just starting to rain. Oh and the food was delicious and again traditional fare! And Tina and Mario treated us to the dinner! I felt a little awkward in that we had just met them and here they were not only letting us stay at their home but also taking us out and treating us to a really nice dinner. Then I realized how awesome it is that even though we aren't on the trail I am back with my trail family and if a hiker came to visit me in my country I would want to do the same. Thank you Tina and Mario for your awesome hospitality! After dinner we took a different route through town before heading back to for a few more hours of trail talk before hitting the hay. 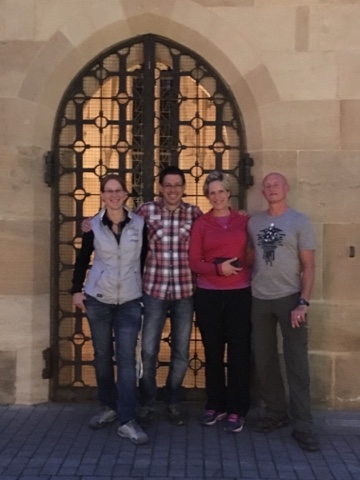