Day 2 - Munich, Germany
I fully intended to keep a daily journal again while I am on vacation. Actually I meant to start it earlier when we moved out of the house and into our tiny bus but I we have been so busy that my mind hasn't settled enough to write. I know it sounds like an excuse but before when I was on the trail I found it so easy to keep a journal and jot down my thoughts at the end of a day. Maybe because I had countless hours during the day to think and process my thoughts it was effortless to write at the end of a day. This is forced. I am on vacation and not on a trail yet and up until now put off writing.  But I know that if I don't start I will regret it later so here it goes.
The past few weeks of working, packing, moving, elimination our stuff has really taken a toll on me. I thought it would be easy to make the switch to the bus. It is after all what I've wanted for over a year now! It was fairly easy to get rid of my own personal items although to be honest I should go through everything on the bus and eliminate a few more of my own personal things when we get back. What really surprised me was my overly sensitive reaction to Michael as he got rid of his stuff. Michael is the kind of person who sees something on the side of the road (read someone else's garbage) and finds a use for it (or imagines a possible future use for it) and stops to collect said item. He's not a hoarder but he does manage to collect stuff - a lot of it! On top of that, he hates change and definitely hates moving. I knew that this was going to be difficult for him and was very surprised at how smoothly things were going over the past month and how efficiently he seemed to manage eliminating extra tools and items he had collected over the past 30 years. The last week however has been difficult. As he became a little frazzled from the size of the move I became stressed the f*#% out by his moodiness. He would make one negative comment and I would be thinking "I'm forcing him get rid of all his stuff, what right do I have to be doing this" or even worse, "how  am I going to to live in such a small space with this negative person." As we moved the last items out and dealt with the last of the garbage I questioned everything. It was unnerving. At the same time we were leaving (in my state of mind read abandoning) our dogs with a friend for almost a month while we toured Europe. You can imagine how we both felt about that. Anyway, we do have amazing friends who have tried to make this transition as easy as possible and as I sit here in the middle of the night on a balcony of our Arbnb "tiny house" in Germany I know that everything is going to be ok. While we were at the Toronto airport waiting to board I sent a message to Dina (Canadian Bacon who I hiked with on the Appalachian Trail) just to say we were on our way and we would see them tomorrow in Germany. I had a panicky moment when I got her reply moments later questioning me on our arrival time and didn't I mean that I would see them on Saturday (not tomorrow - Friday). It turns out I has booked our flight a day earlier than them but at the time I was thinking "am I at the airport a day early?" Again, everything turned out for the best and upon arrival we booked a room at a nearby hotel and got to catch up on much needed sleep and start to unwind. We had an amazing dinner and went for a relaxing walk before turning in for the night. In the morning, the hotel provided an all you can eat buffet breakfast before we headed back to the airport to meet Keith and Dina. I don't even think I realized how much I missed them until I saw them again. I am so thankful for the many great friends that I have but this is different. It felt so good (like I  had just come home after a long time of being away) just hanging out with them today. This holiday/vacation/hike /adventure is going to be amazing! I just know it! It's really late and I have written for too long. I will fill you in on the cool place we are staying at tomorrow. Good night World! 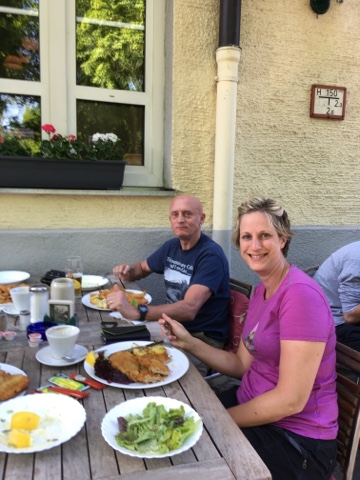