Day 9 - Zurich, Switzerland
We woke up before Keith and Dina and went to the little grocery store across the street and got the basics for breakfast. Michael made everyone coffee and Dina made us an amazing breakfast. We took our time getting ready because the weather did not look co-operative. We headed to the city centre of Zurich and walked around sightseeing. One of the first places we came to was a Tesla store! I couldn't believe it! We have seen a lot of expensive cars here. Lots of Porsches and a few Ferraris and Maseratis. I love how the old and new is meshed together here. Most of my pictures had modern buildings right next to buildings from the 16th century! We pretty much just walked around in awe! It seemed like every street corner had a fancy water fountain and every door was ornately decorated.  We toured St. Peter's church which was much more modestly decorated and seemed to fit in with the architecture in the area much more naturally than the rich, gaudy churches we had seen in Germany that really stood out. What's really funny is that we later looked up the history of St. Peter's and it turns out that it had been a holy sight since at least the 8th century with a temple to Jupiter then over the centuries it was replaced by different styles of churches (a Romanesque church in 1230, a gothic style in 1460 and what we saw today was built in 1706). The church tower acted as the towns watchtower/fire tower and was checked every 15 minutes up until 1911. It also has the biggest clock face of all the churches in Europe. Then we went to Fraumunster which was a gorgeous cathedral that had been built over the remains of an 8th century women's aristocratic Abby. It was stunning. Unfortunately we couldn't take pictures inside but the stained glass was like nothing I've ever seen before. The people depicted in the stained glass were very fairy like and the glass seemed tinted with fades rather than panes of solid colour. The pictures were beautiful and probably displayed a story but certainly not one that we recognized. There was also a skeleton etched into the wall. It seems like at one time skeletons were a thing in churches. I've been surprised at how many we have seen. Outside of the church there was an attached garden with beautifully painted hallways and arches that again told a story. You couldn't leave one church without without seeing something else of equal interest from the doorway. I took over a hundred pictures in just a few hours. Even the narrow alleyways were interesting! Our next stop was Grossmunster which is believed to stand over the graves of three 3rd century saints (there is an interesting but unbelievable legend about them). The church was completed in 1230 but a fire in 1763 prompted an immediate rebuild with restorations in both the 19th and 20th centuries. The church was fairly simple inside and there was a tower that could be climbed to the top for a fee. The stained glass was again very different from anything I had seen and looked almost like thin slivers of rocks but I'm sure that was the effect the artist was going for. There are amazing pictures I could post from today but instead I'm going to post a picture of the side door of Grossmunster so that you can see the intricate detail even in the side doors and you can get a vague idea of that the stained glass was like (although from inside it was stunning). After our tour of Zurich we stopped at a large supermarket that was very overwhelming (lots of people and it was hard to read in another language what we were getting) and then came back to the apartment to relax. Michael and I went out for a short walk and were surprised to find ourselves out in farmers fields within minutes. The street we are staying in seems so busy yet within steps we were in the countryside and there was no evidence whatsoever of the town. We got back just before it started to rain and we all had to don our rain gear to walk to the restaurant for dinner across the street. It was a ridiculously expensive meal but the food and company was great! We even treated ourselves to the most expensive desserts I have ever paid for but hey, we are on holiday! After dinner we pretty much just turned in for the night. Good night world! 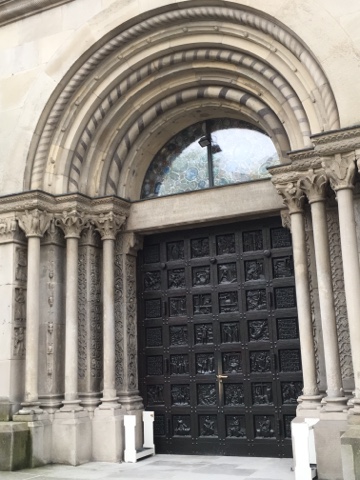