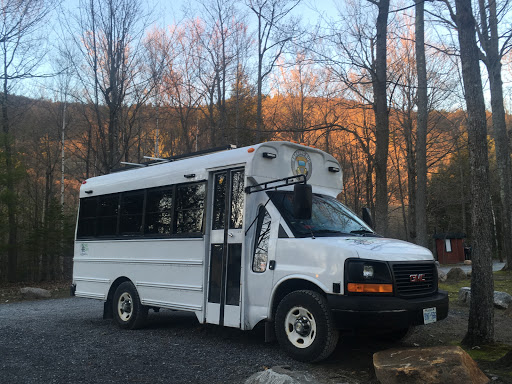 We slept so soundly within the park limits last night and again woke up to the sounds of birds. I was surprised at how quickly the park filled up with cyclists and was happy at the thought of driving out to what I thought would be a more secluded place. I couldn't have been more wrong! We pulled off onto a barely noticeable dirt road and were shocked when the parking lot for Luskville Falls was full. After carefully maneuvering the bus back out we parked along the dirt road and headed to the trail. The trail was perfect! Busy but perfect! It followed the water straight up the mountain and continued on to an old fire tower turned weather station. And I do mean straight up! It reminded me of the rocky steep ups on the Appalachian trail and how sometimes I would literally count my steps before I would allow myself to take my next break. I took multiple breaks on the way up and will admit that when we were at what I thought was the top and saw a sign saying I still had 1km more to go I thought of turning around. I quickly recovered after another break though and soon we were on our way up again. At a simple rock hop water crossing I fell and got soaked but walked away unscathed. The fire tower at the top had a fence around it and was not meant to be climbed. Michael tried but turned around at the halfway point. There were more trails at the top including a 21km trail that would have landed us exactly where we were yesterday but I hadn't packed snacks so we headed back down to the bus. There was a fork in the trail on the way down so we took a different trail down that was less steep and way more enjoyable considering the dogs were on leashes and I had to constantly remind Melkie to stay behind me. Back at the bus we were right back into our routine of eat and nap. I was still overheated when I set up the bed and within minutes I was too cold but had forgot to take out my blanket. Of course Michael was already sound asleep and I was unable to access the blankets in the drawer beneath us so I got up and worked on a silly video of today's adventure. I hope you like it! When Michael woke up we decided to go for a drive and check out Luskville. It was a tiny villiage along the Ottawa River with as many cottages as houses. We had already decided to stay by the Falls tonight but we did explore a dead end road that had an interesting trail to the escarpment mostly used by rock climbers before heading back. On our return to the falls we pretty much had the place to ourselves and discovered another trail at the far end of the parking lot. It was the perfect trail to end the day and when we got back to the bus it was time for a late dinner. Goodnight World!
Posted by Unknown at 5:46 AM