Last night I woke up to a huge lightning storm. I wish I had have taken pictures. The lightning just lit up the sky! And then it was over. When I woke up next it was to the sounds of birds and the light filtering through our tinted windows. Today was absolutely gorgeous! I had intended to get up early and go for a walk in hopes of seeing some wildlife but instead we had a leisurely morning, taking our time with coffees in bed. After breakfast I loaded up my backpack with Gatorades and snacks and soon we were headed up the trail. We started out on a paved trail that turned into part to the TransCanada Trail and then later turned into a narrow dirt path (the kind I like best). Of course that was about the same time we started with a whole bunch of ups and downs. Each up on its own was entirely manageable but soon I was out of breath and Michael suggested a break- perfect! The farther we got from the bus the more we wondered when this lake was going to show up. It seemed like we had been walking forever. Finally while on another break Michael looked at his map and we realized we had walked almost all the way around the lake (without even seeing it once) and would soon be at the lookout spot. We hiked up to a marsh and both of us were thinking I hope this isn't it but soon we saw a clearing ahead and came out onto a parking lot. The lake was on the other side and there was a 2km boardwalk trail around the lake. Unfortunately dogs weren't allowed on the boardwalk (due to the sensitive ecosystem of the lake) so we hiked on. We can't help but notice how much more active people seem to be here compared to Ontario. We see cyclists everywhere! Today the park is filled with cyclists, hikers and we even saw a few people on roller skis. I get that we are in a park and that what people do in a park but we have been out on the trail every single day in Ontario for awhile and haven't seen this many people. This park is designed really well in that it has designated trails for each activity with few shared trails. There are trails for skiing and mountain bikes and snowshoeing here too! It felt really good to have my pack on and be on a dirt path in the middle of the woods today. We arrived back at the bus tired and hungry so after a quick bite to eat it was nap time (again). Naps are becoming an afternoon routine. Later Michael made us dinner and we just hung out on the bus for the evening. It was the perfect day! 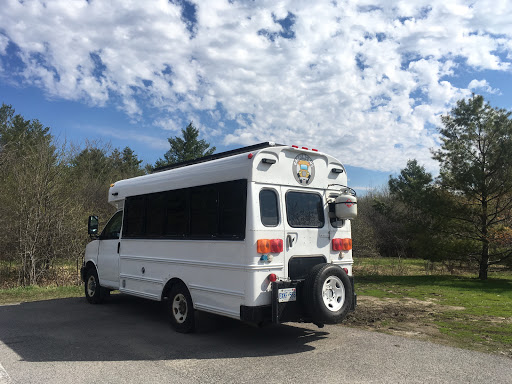