The most important reason we were hanging around rather than travelling was that we were expecting a new granddaughter and she has finally arrived! Everything went well and mom and baby are both back at home healthy and happy! We have spent our time between the grandkids finishing up projects and preparing the bus for long distance travel and I think we are finally ready! It seems anti climatic to say that we are leaving today. I am excited but to be honest, living on the bus is so normal to me now that it doesn't seem like a big deal to be travelling on it. The bus is my home and wherever I park my bus is where my home is. Don't get me wrong, I am totally looking forward to the adventure and seeing as much of Canada as I can! It just doesn't seem as huge or daunting as it did two and a half years ago when we first came up with the idea. We have learned a lot in those two and a half years! Not just about buses or tiny spaces or where to park discreetly but we have learned so much about ourselves and each other. We know more about who we really are and what our personal limits or boundaries are. We realize how much of who we were was based of our culture (or society's idea of normal) and not what we actually believe should be normal. EOur daily decisions (what we buy, our food choices and where we buy things) have drastically changed in that we are so much more aware of our waste, our energy consumption and who our purchases are helping. In no way am I claiming to be better than anyone else (we are also very aware of our shortcomings) but changing how we live has been a huge eye opener of how ignorant we were choosing to be. I remember when I first got back from hiking the Appalachian Trail how overwhelmed I was by all the choices or options I had in department stores and how most of the "normal" house routines seemed so ridiculous to me after living out of a backpack. Now after living on the bus for almost a year Michael often makes comments resembling the exact thoughts I had then. Living a simple, slower lifestyle has forced us to rethink how we want to live and make intentional choices rather than just going. With the flow of society.
Anyway, we are leaving today! We had the back windows tinted this morning and took the bus to a car wash. I went out for my last breakfast with a friend for awhile and made promises to meet again when we were lighter (we both need to lose some weight). Michael is just saying goodbye to his kids and we will be off soon. The adventure finally begins! 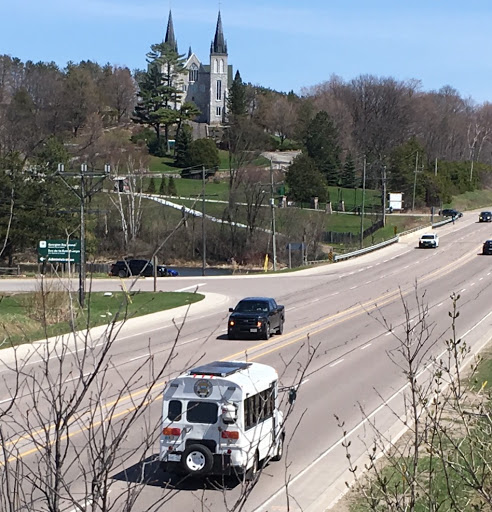