I woke up to the sun shining through the front window. I had intended on waking up to try to catch the sunrise but I missed it. After a round of coffees and a walk along the docks with the dogs we set off towards Mahone Bay stopping at a giant garage sale that had the coolest bronze bell from 1776. If I didn't live in an 80sq ft bus I would have bought it. I still contemplated buying it but quickly realized we have no extra space and what would I really use it for within the next year anyway. Anyway, Mahone Bay looked gorgeous as we drove in but we made a last minute decision to continue on to Lunenburg. It was a great decision! Lunenburg is a UNESCO (United Nations Educational, Scientific and Cultural Organization) designated World Heritage Site because it is the best example of British planned colonialism. This designation helps protect the towns unique architecture and design. The place was a very interesting mix of old and new. There were so many streets filled with homes that were easily over two hundred years old! The oldest house we found as we strolled through town was from 1753 but there may have been older! It was kind of odd to see such old houses with new cars pulled up in front or downtown where all the stores were to see a Foodland in what looked like it was once an old barn. At the waterfront I was surprised to find the Bluenose 2 at at the museum docks looking like it had seen better days. Upon closer inspection I realized that it was there for repairs and there was actually someone way up high on the mast re-staining it. I'm assuming getting it all ready for Canada's 150th birthday. Across the harbour I could see a golf course up on a hill overlooking the town. It was finally time for Michael to get a round of golf in or so I thought. We drove over to check it out but Michael decided today wasn't the day. While we were at the golf course I could see this huge Bavarian looking building (well from afar it looked more like a castle) and wanted to investigate. We drove back through the town and I can't believe I missed it the first time, I had walked within a block of it before turning around earlier. Anyway it turned out to be an elementary school surrounded by a graveyard. How cool would it be to go to a school like that as a kid! After Lunenburg we stopped at Mahone Bay and walked around for a bit. I was looking for a sign that had a friends name on it. We found it! It was a big sign with all of the families who founded Mahone Bay in 1754, my friend is a direct descendant and sure enough we found the Westhaver name! Next stop was for lobster dinner. The first place we tried was closed to the public because they were hosting a wedding. We seriously contemplated crashing the wedding, especially when we saw the meal they were going to be served. Needless to say we moved on. We were on our way to Peggy's Cove and there was a seafood restaurant there too. It was sad thinking about the Swiss Air crash as we passed the memorial site just before turning into the tiny Peggy's Cove community but seeing the lighthouse out on the rocks changed our frame of thoughts. We ate first. I can't eat shellfish so my food options were extremely limited at a seafood place and it was kind of disturbing watching Michael eat his lobster but soon we were climbing over rocks to check out the lighthouse and see just how close we could get to the ocean without falling in. The water was exceptionally calm today. Not that I have been here lots but I have never seen it this calm and peaceful. It made climbing out on the black slippery rocks all that more tempting but I resisted. Back at the bus we decided that we wanted to stay the night here but not exactly where we were parked so we moved out to the parking lot near the tourist information centre where we had a good view of the ocean (but not the lighthouse). Good night from Peggy's Cove! 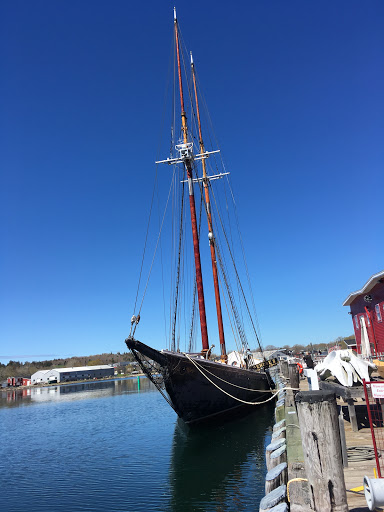 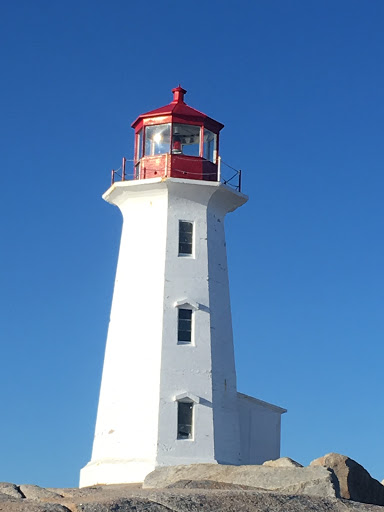 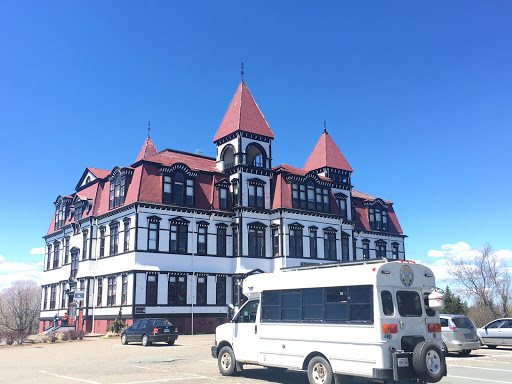