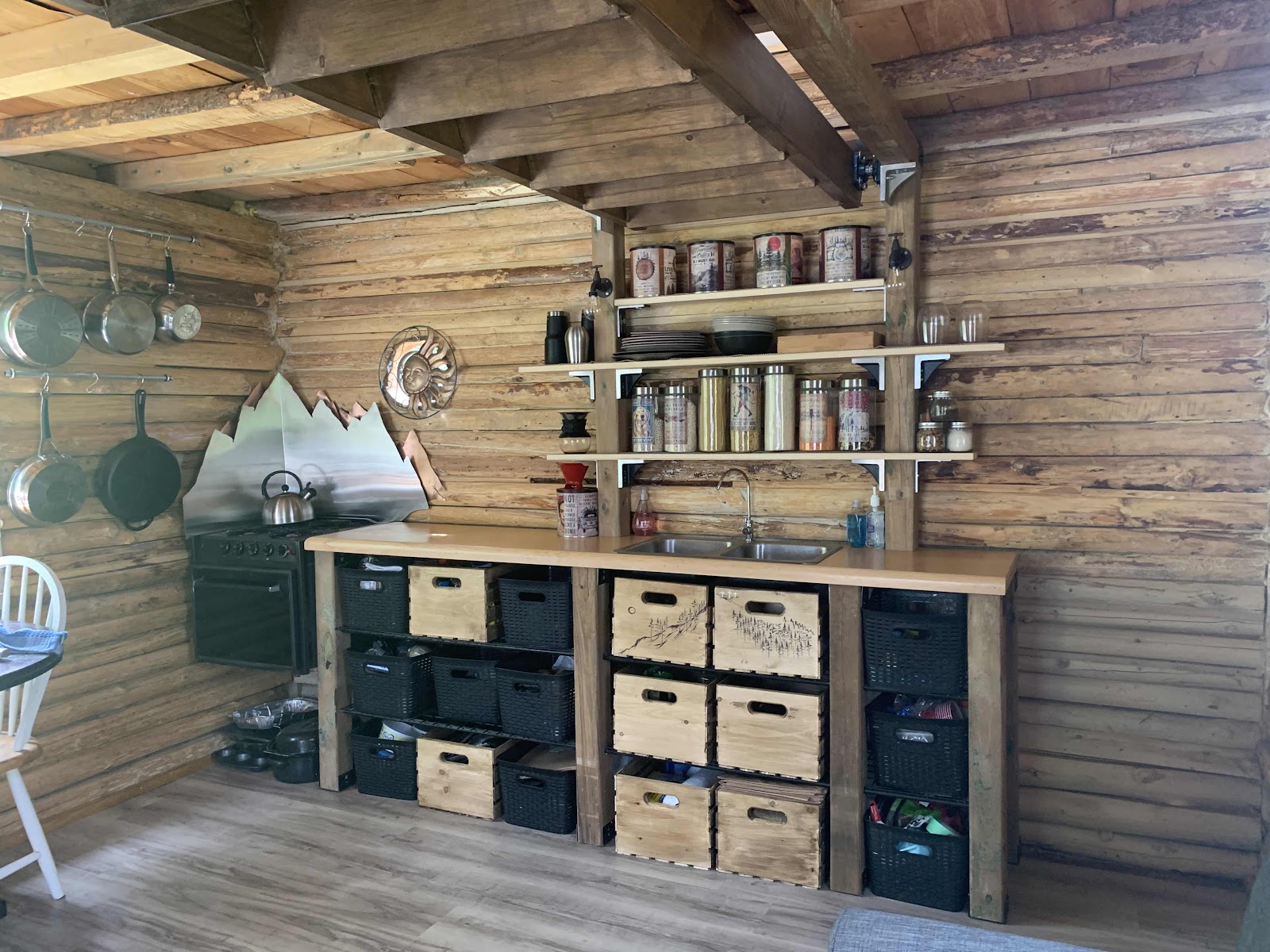 One of the first projects this month was getting the stove cleaned up and making sure it worked before installing it. A friend of ours who has several trailers offered it to us along with an RV furnace and a double sink (thanks again Vic!).  It cleaned up nicely and everything worked first try! The furnace needs a little more work but since it’s warm out it’s not a priority right now. 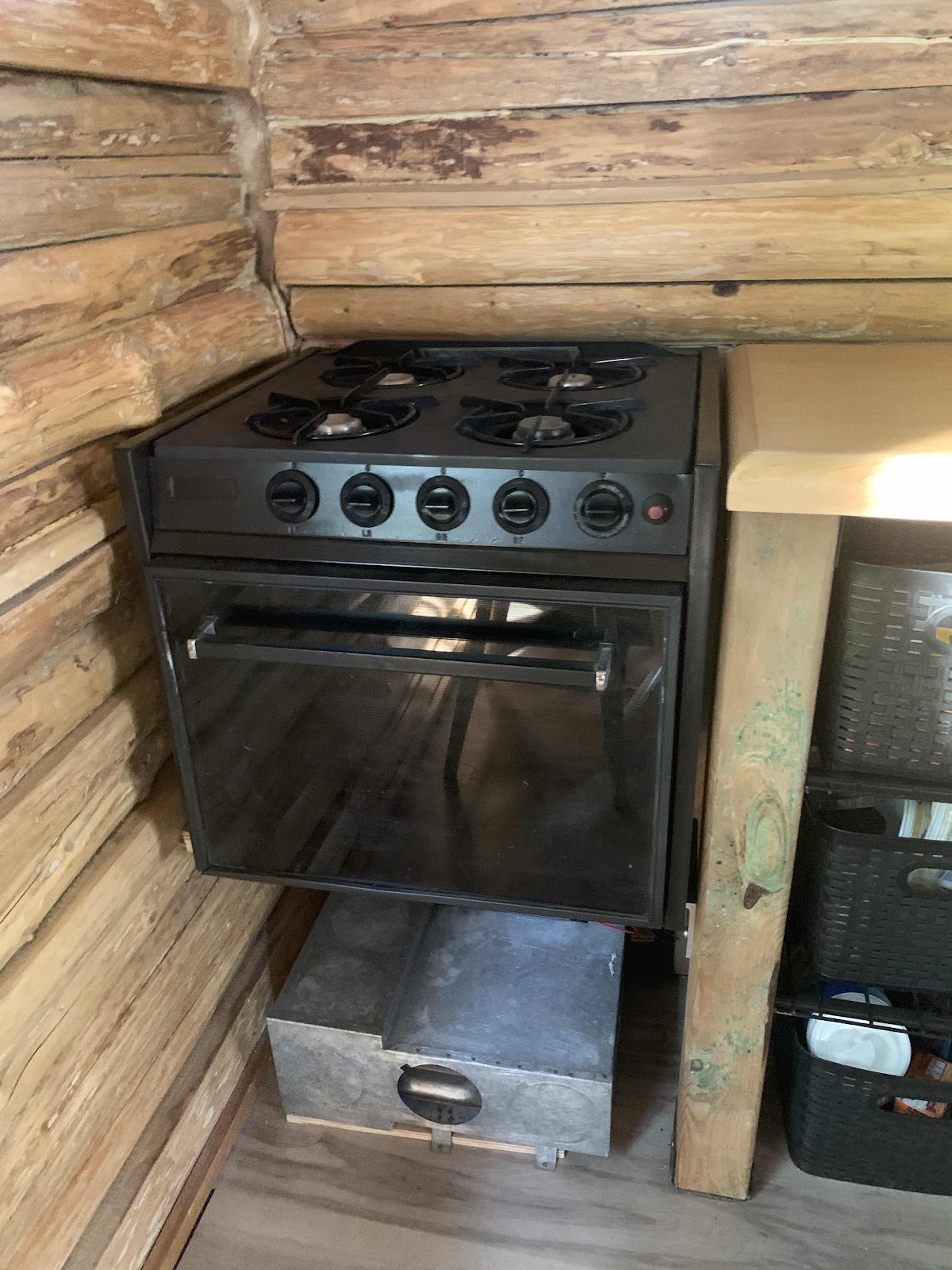 Michael has spent most of his time outside cutting grass, trimming all of the overgrown bush close to the cabin and monitoring my garden.  So far we’ve had wild strawberries, the strawberries from my hanging baskets and radishes. The lettuce is almost ready. 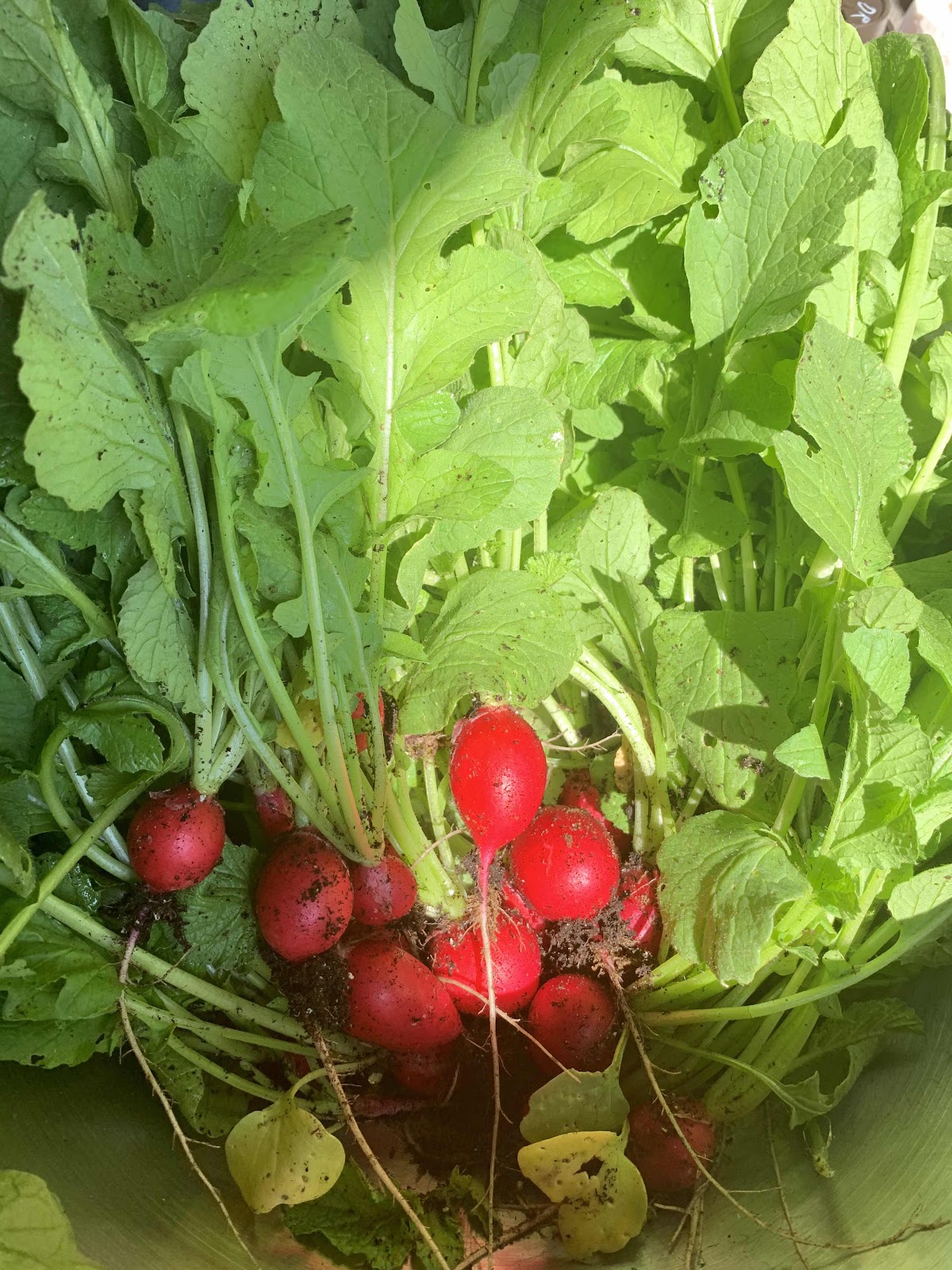 My friends seem to think that we are hard at work everyday here but the reality is that most days we have been working on fun little projects.  We bought some pine boards and after I stained them Michael put them up for me.  Since then I have printed off a few pictures I like and modge podged them to a couple of containers. 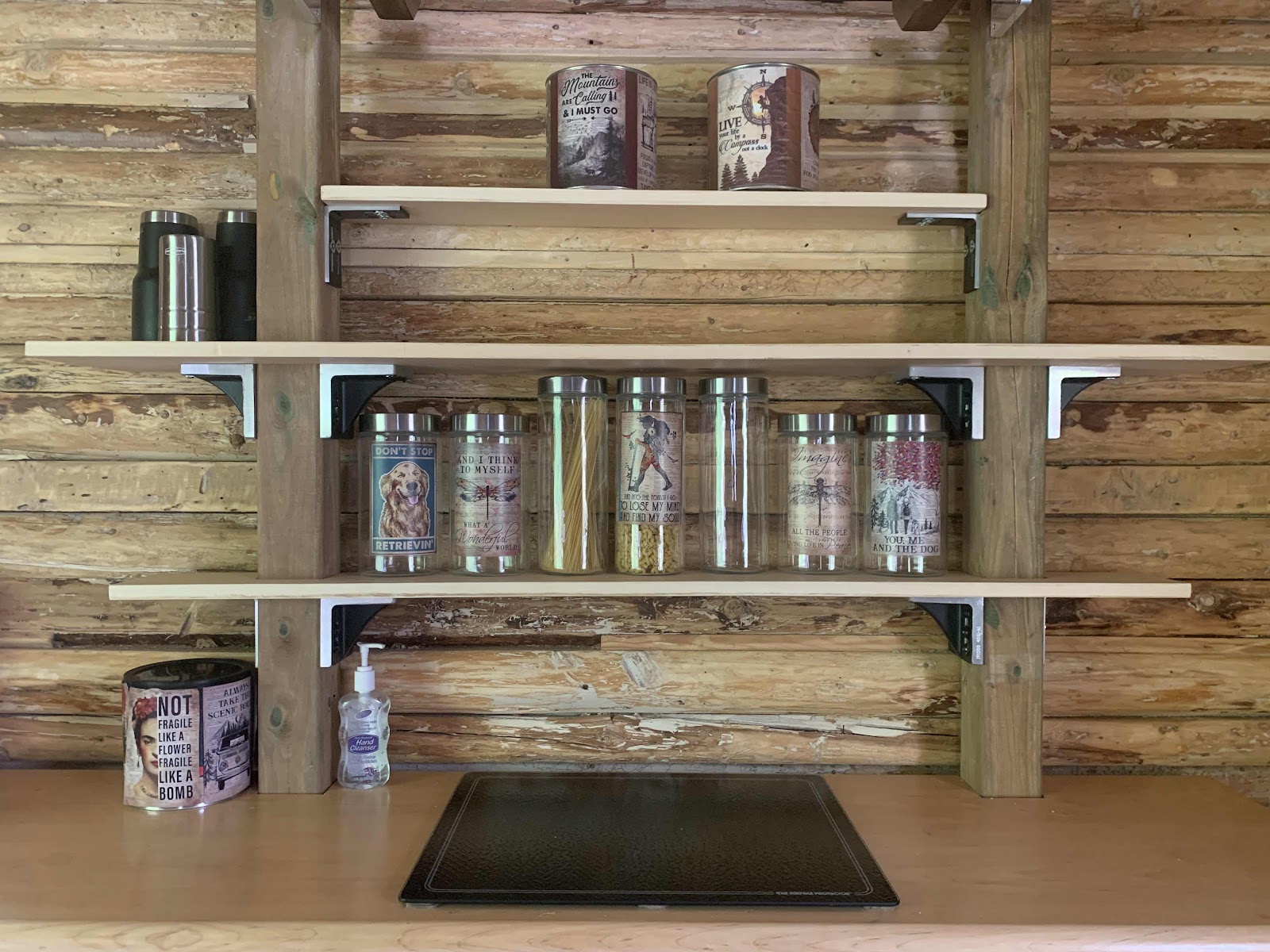 As you can see my kitchen area doubles as my storage area and everything is on display. To keep things looking tidy I mounted some leftover pipe from the under counter project on the wall and am using it to store my pots and pans. 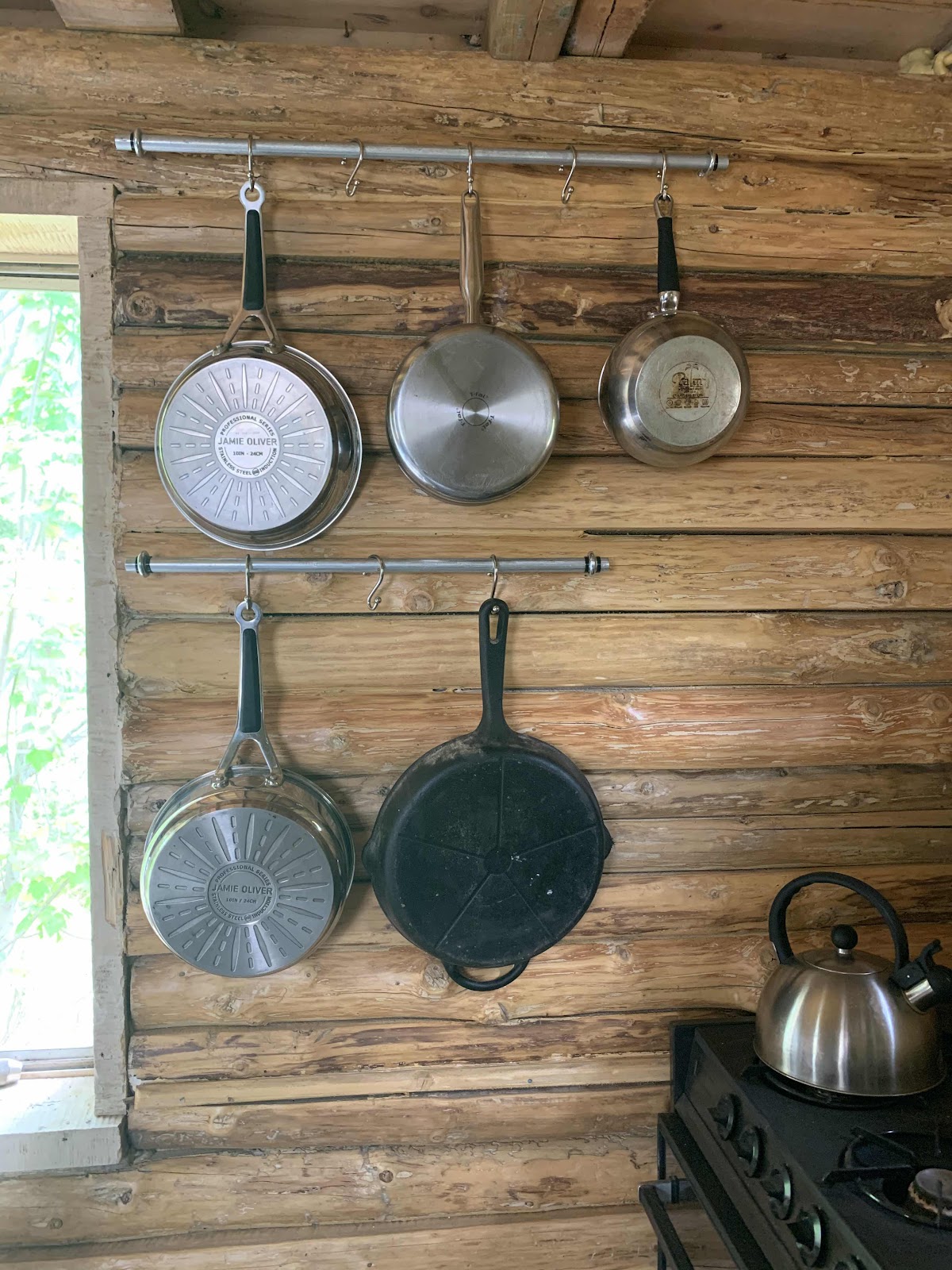 Seeing the pots up inspired Michael to finish up the kitchen area for me. During the winter we had planned  a fancy backsplash for the stove that would take awhile to make. We found a place in North Bay that sold us the stainless steel and put the corner bend in for us. We already had the copper and Michael did the rest! He did an awesome job! 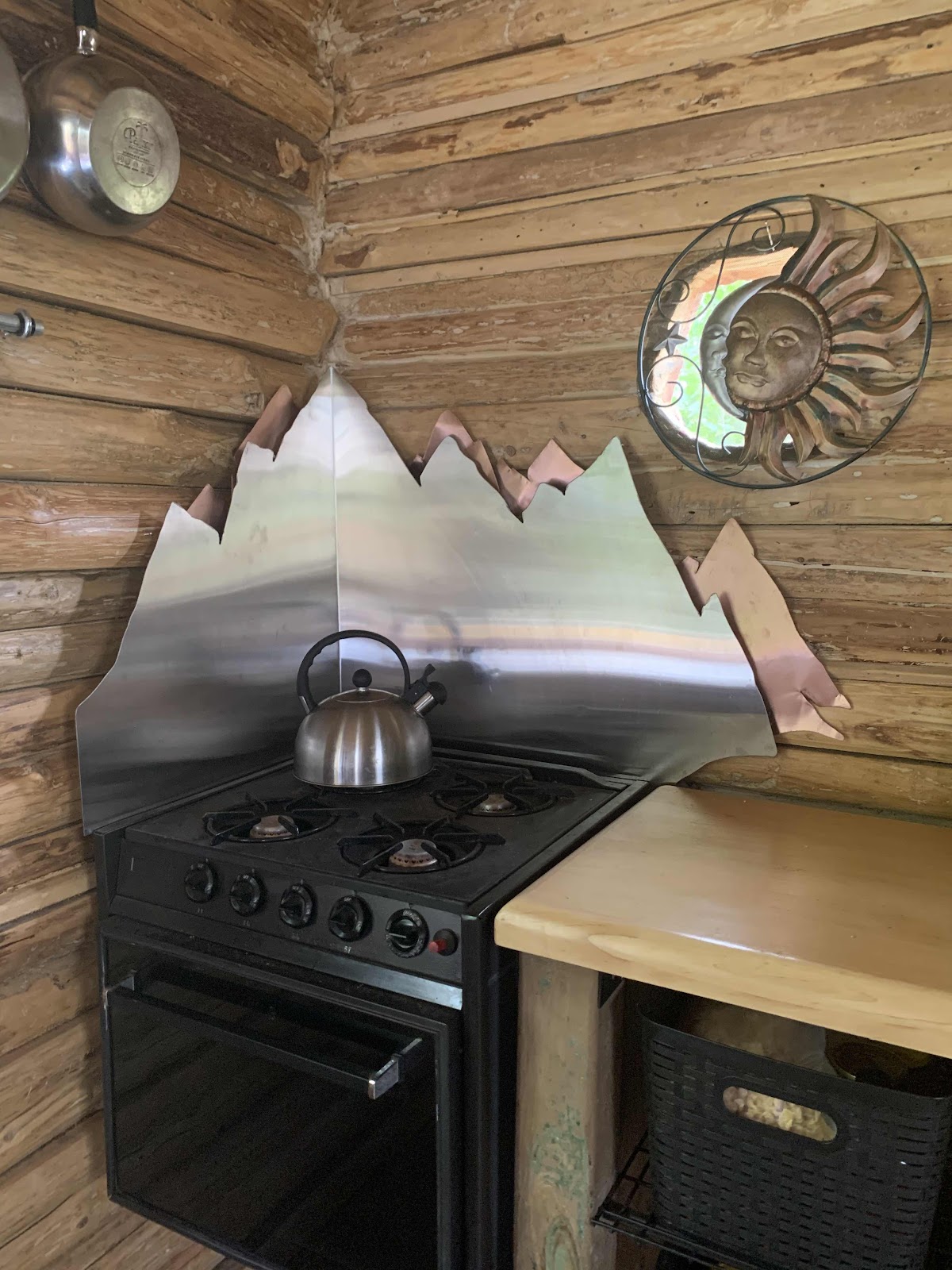 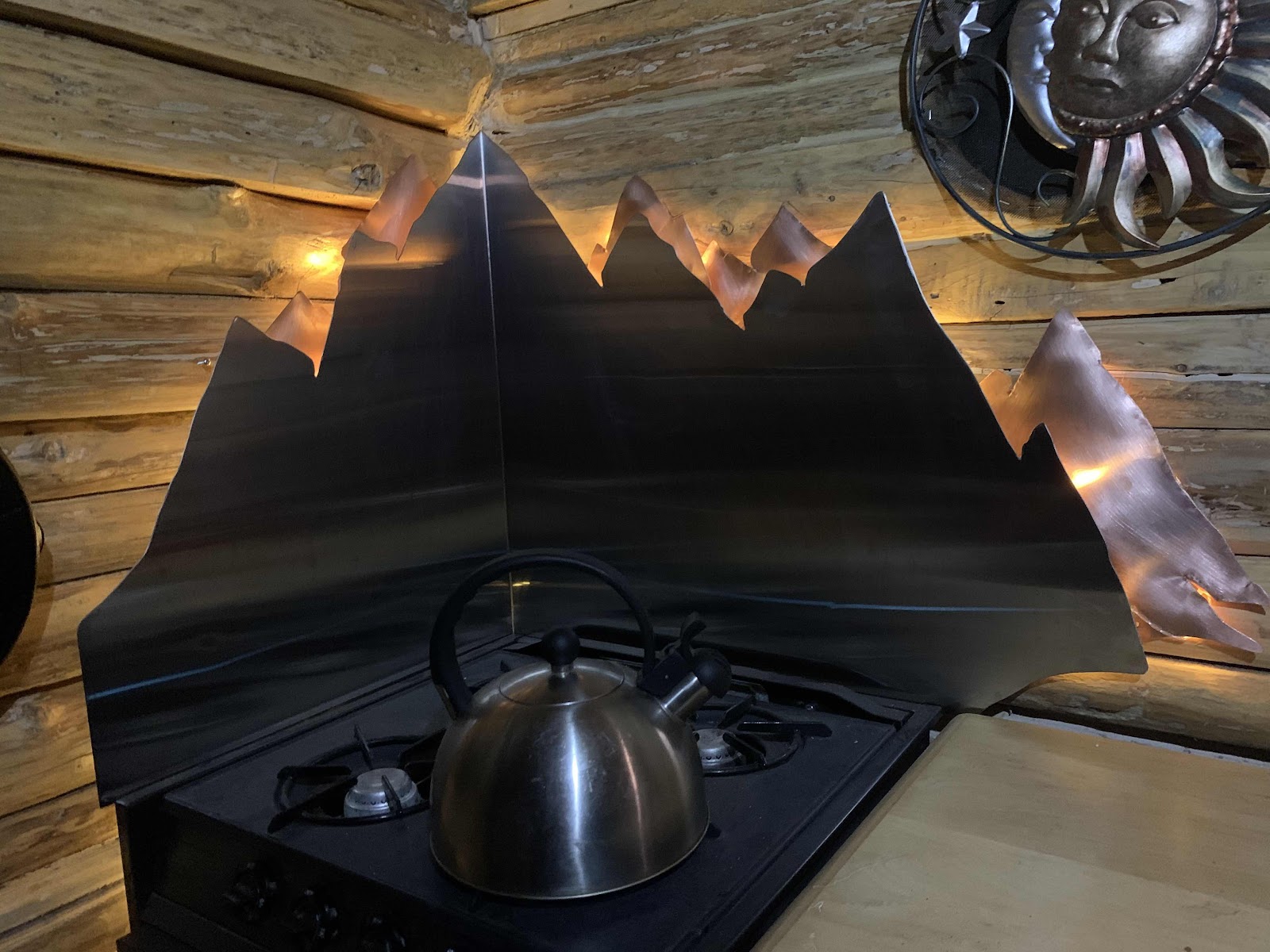 to decide what to put in them. I feel like we already had enough mountains in here. I was thinking maybe trail signs (like the PCT logo or a copy of one of the original blazes, the Camino de Santiago blaze, the AT logo or even just a white blaze) or maybe animals (a bear, a wolf, an eagle...). We finally decided on a parts of a landscape on each box and Michael just started to draw them on. 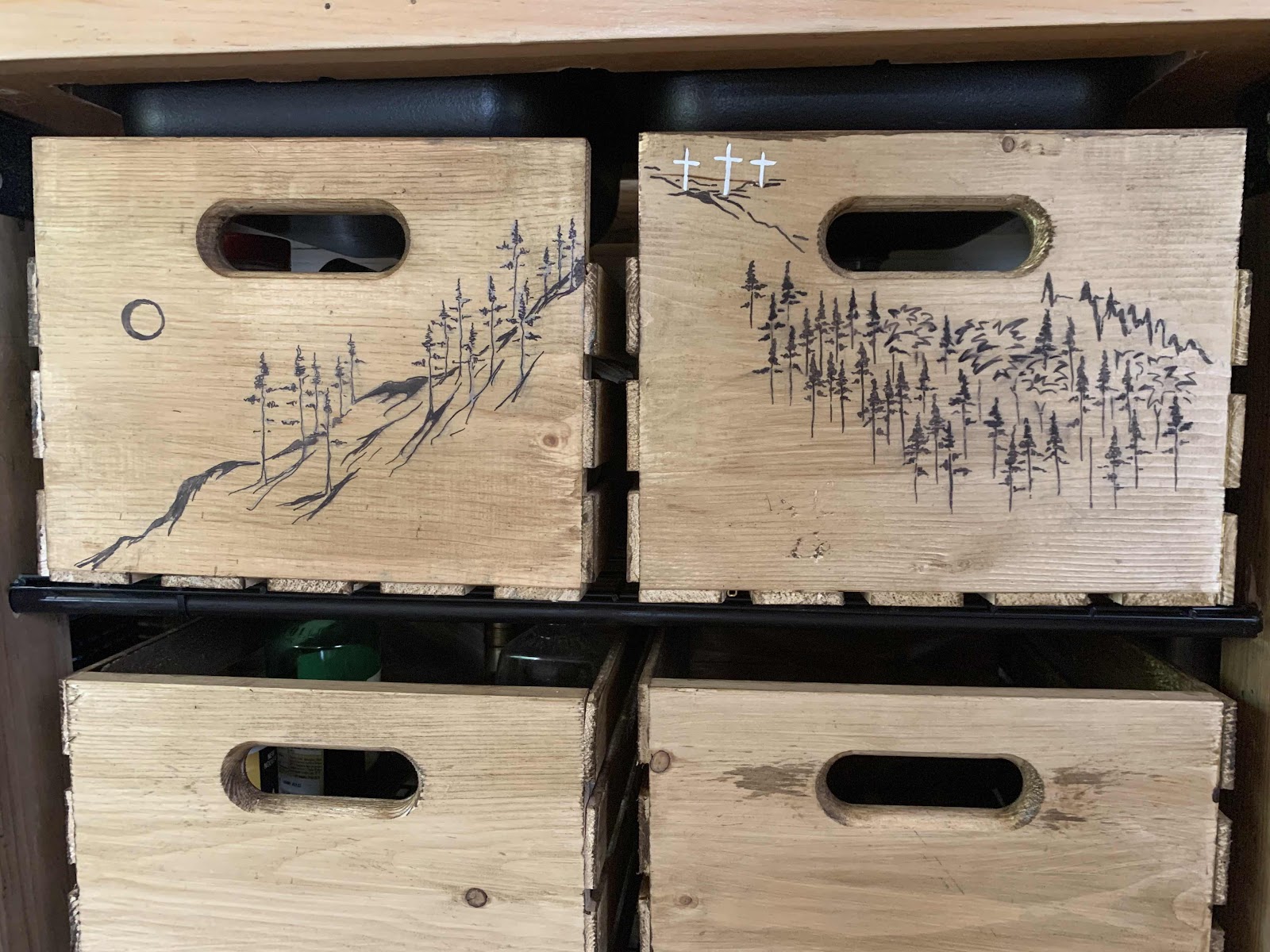 We had bought a few outdoor solar lights and Michael found old fashioned taps at the hardware store.  After taking the solar lights apart and mounting the tiny panels outside and feeding the wire inside, we mounted the taps with the light bulbs attached and hooked up the wires. The lights turned out great and come on automatically when it gets dark outside. 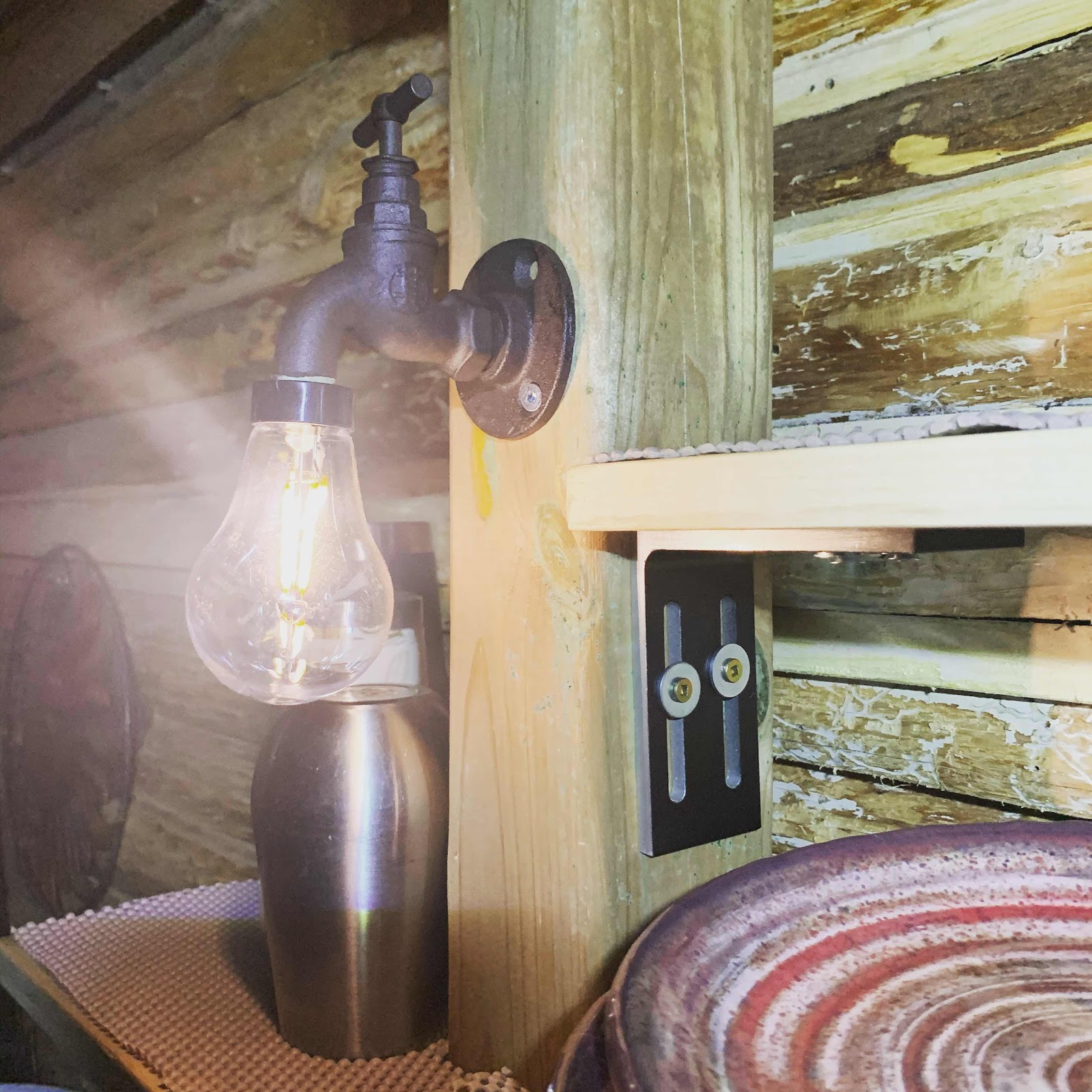 Although we already had the sink we have been waiting on a faucet to arrive that was purchased online.  After months  of waiting I decided to just buy a water filter that comes with its own faucet (we needed a water filter anyway) so that we could go ahead and install the sink. We have clean water inside now! 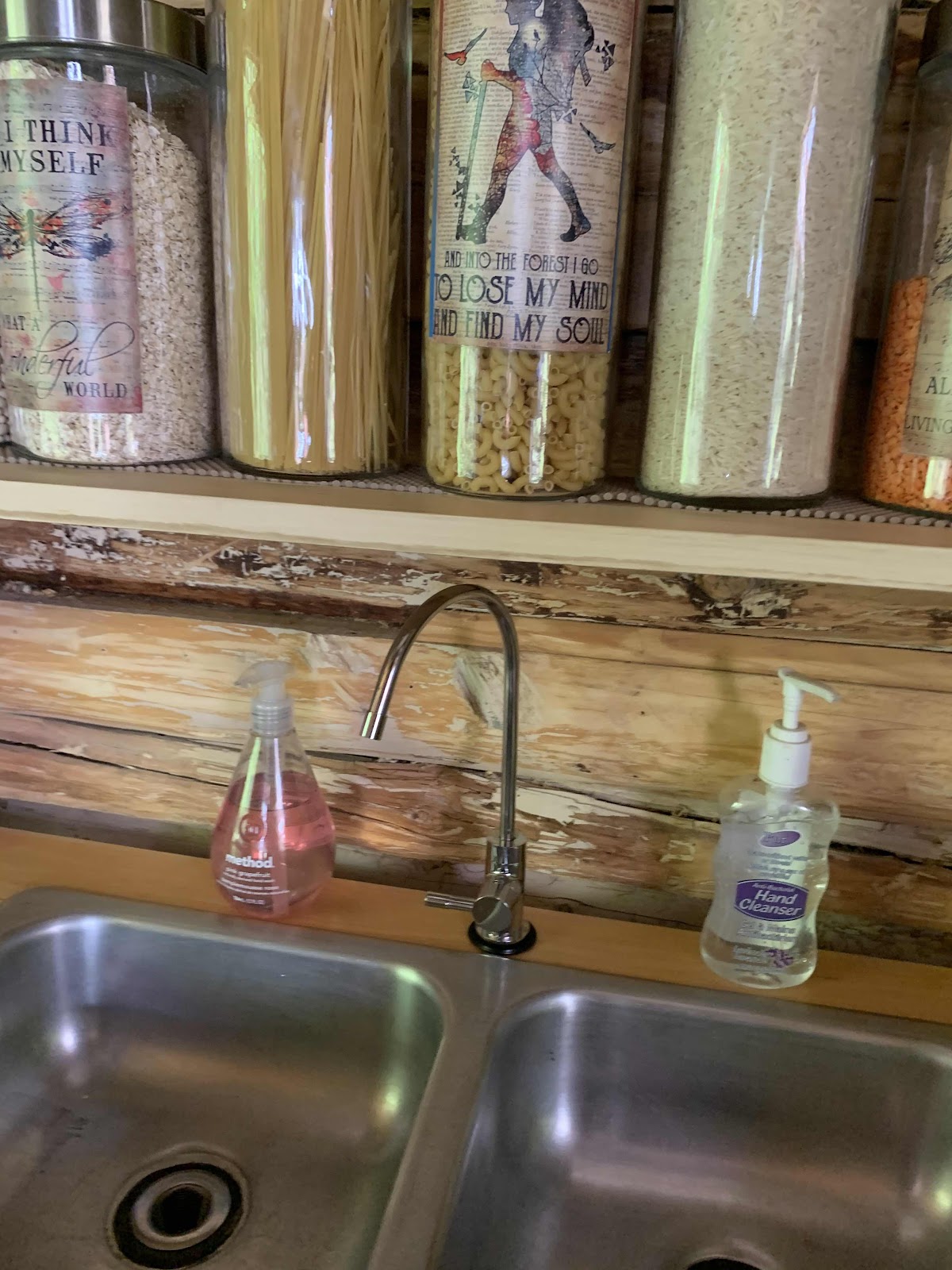 I’d love to be able to say that the kitchen is finished but it will be at least another month before we add a more permanent power system and buy a fridge for the cabin.  We are still using the solar panels on the bus as our main source of power with occasional use

of a generator.  We have a fridge on the bus but because we are keeping the bus adventure ready we are making several trips from bus to cabin anytime we need something from the fridge. 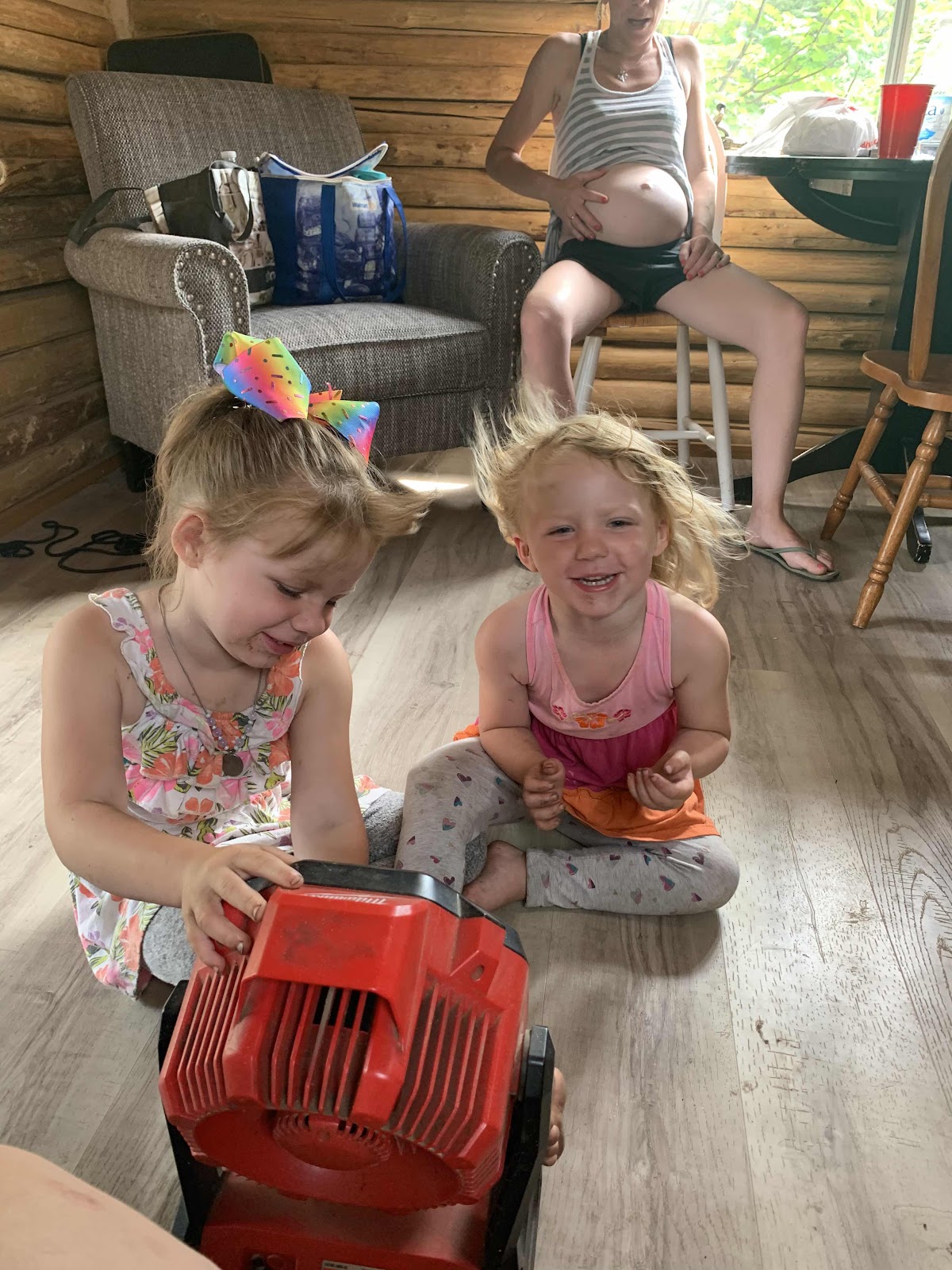 The grandkids came up to visit and it gave us the chance to explore one of the local beaches.  It’s a beautiful area and the water was perfect! 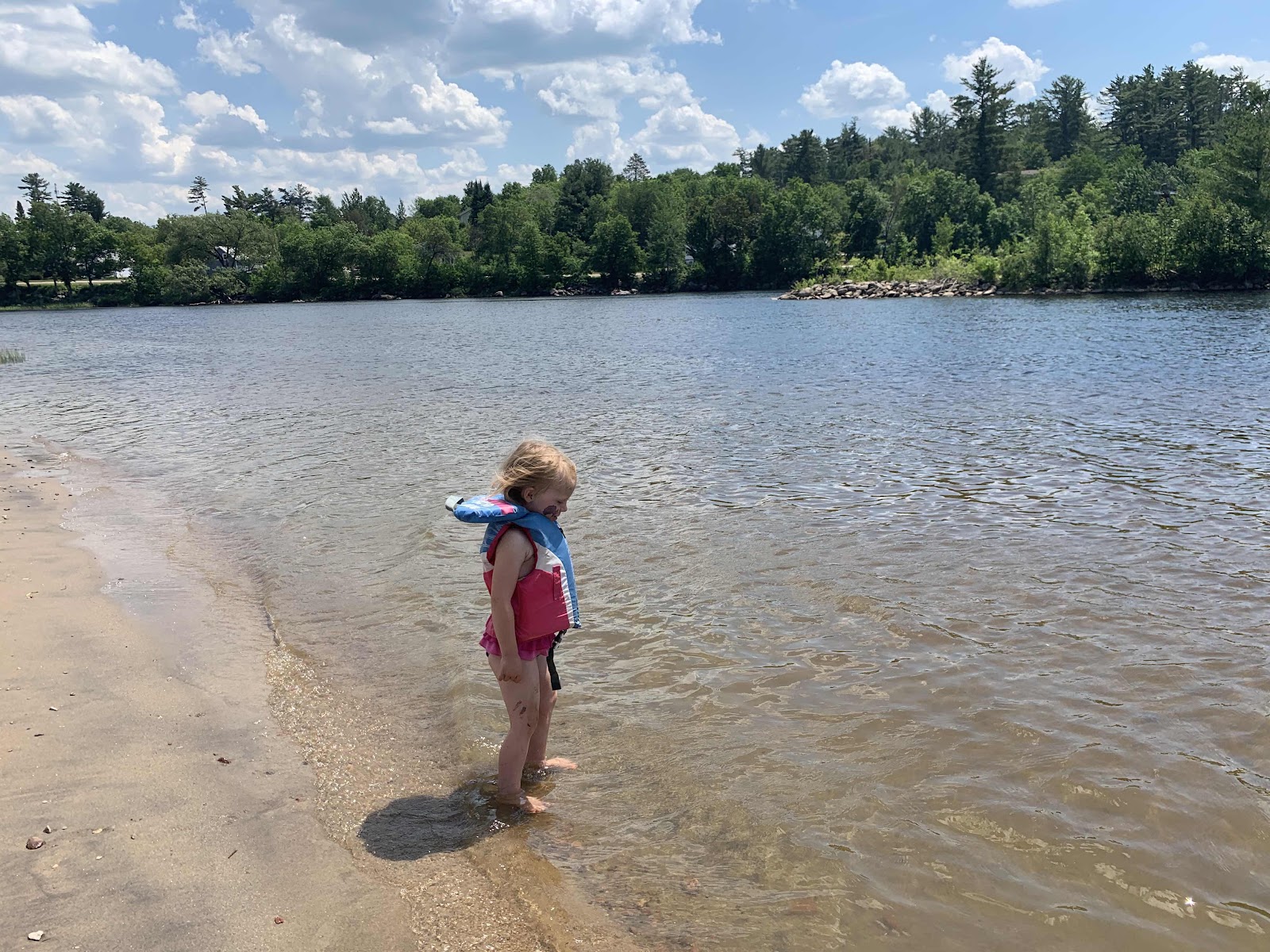 I have been taking it easier this past month (I’ve taken the time to read several books and am starting to daydream of the next big hike) but Michael has been pretty much continuously working on one project after another and is ready for a break. I think we will really slow down on the work this month and just work on landscaping and a few small, easy jobs inside.

I’m happy to have a kitchen in the cabin and not have to run back and forth to the bus as much and am impressed that this much work has been done in three months. It’s amazing how many goals we’ve been able to accomplish in such a short time and I find myself starting to think about what is next!

Email ThisBlogThis!Share to TwitterShare to FacebookShare to Pinterest
Labels: cabin life, minimal, off grid living, off the grid, shed to cabin, tiny house