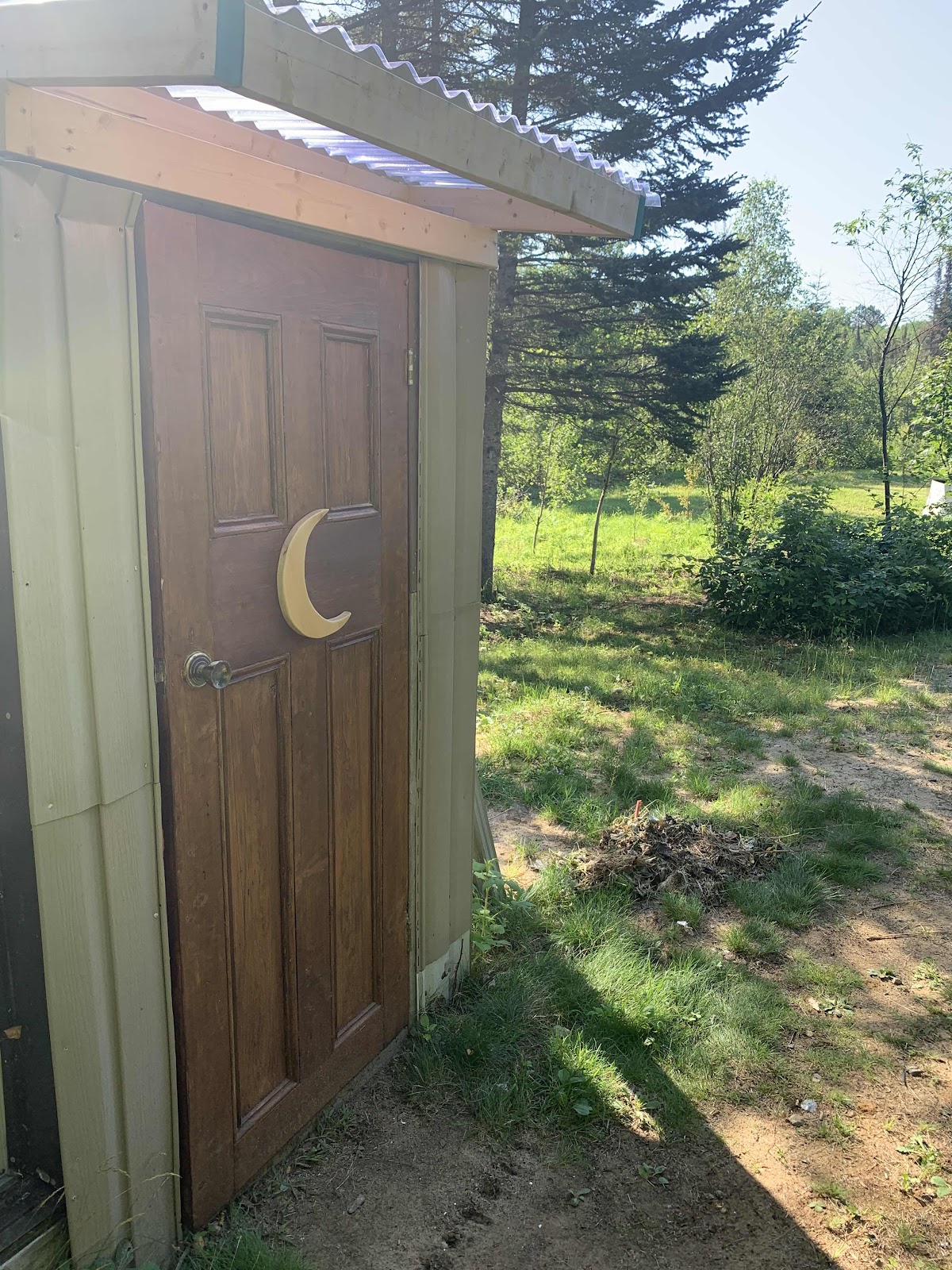 For some reason, whenever I’ve done anything that is different from what most people normally do (like hike a couple thousand miles or live on a bus and now live in a cabin in the woods) there are always questions.  Not the kinds of questions I expected to get but always “where are you going to poop?” Or “where will you go to the washroom”? And most recently “why would you want an outhouse?” And “how many steps from your bed to your outhouse?” Honestly, I can’t believe how many times I’ve been questioned about my toilet habits in the past eight years!
So here it is all of the answers people seem to want to know.  Years ago while thruhiking the Appalachian Trail I had the opportunity to see and experience just about every type of outhouse imaginable.  There were the typical pit
toilet outhouses (like you see in most provincial parks) and other odd pit toilets (imagine a small platform on a side of a mountain with a toilet on it - no walls and a perfect view of the landscape). There were “upgraded” outhouses that had fans under the toilet exhausting the terrible smells through a pipe out and away.  In some of the more touristy areas of  state parks I hiked  there were compost toilets (like Sun Mar or Nature’s Head) complete with educational information about how the toilets worked and why they were so much better for the environment.  As I hiked farther north I was fortunate to meet “caretakers” students working in the White Mountains whose job it was to literally “stir the poop” with big paddles (picture a canoe paddle) in giant bins to help the decomposition process before the bins would be helicoptered out be dealt with in a more appropriate environment.  But the outhouse that fascinated me the most was one that had two toilet seats (no, not the one with the cribbage board in the middle for any hiker reading this).  It was hilarious! There were explicit instructions on what to do and how to do it and included instructions and a pooper scooper for if you made a mistake.  Soon after visiting that outhouse I met someone who was out doing research using that outhouse. He explained how it worked. One seat had a funnel that led to a 50ft hose with holes in it and was for urine. He explained that it is completely safe for urine to go straight into the ground and said that the capability to move the hose around so that the urine wasn’t always going to the same spot made it even better.  Then he explained how they had tried different types of duff for seat number two (where the number two goes). Duff is the bulking agent (on the trail this is usually sawdust or dead leaves but could be peat moss or coconut coir) that is thrown in the toilet after a bowel movement to cover the feces and leave air pockets. This helps cover the smell and allows for faster decomposition.  He went on to explain exactly how to create the ideal conditions for decomposition. Part of his job was to take samples from the completely decomposed bin and have it tested for E. coli levels.  While
I thought that sounded like a gross job he was obviously proud that his last samples results had been perfect.  Basically this system worked. At the time I thought all this information was interesting but to be honest I never thought it was something I would need to know (or want to know about) at any point in my future. 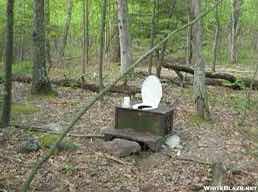 Not my picture but this is one of the outhouses on the Appalachian Trail.

From the time we decided to buy the cabin I knew I wanted an outhouse and I knew which type of outhouse I wanted. I also figured this would be a hard sale for Michael.  Fortunately the book I had wanted to borrow from the library “The Humanure Handbook” by Joseph C Jenkins became available while I was away visiting my daughter so Michael had a chance to read it first. The book starts out by comparing humans to pathogens with no care or concern of our host (Earth) and gives alarming statistics about our destruction of natural resources (wood, water, fish, animals) and the creation and release of toxic chemicals. It mentions our overconsumption of just about everything and then brings up waste (food waste, yard materials, agricultural waste and human waste).  He suggests that by processing the waste rather than recycling it we are causing way more damage to the earth and depleting our soil and fresh water supply at the same time.  I’m glad that Michael had the chance to read it first because even though he admittedly said “I don’t want to deal with shit!” He was much more receptive to the idea of recycling anything than he ever has been and acknowledged that having an outhouse is a more natural part of a cycle for soil nutrients than wasting water and flushing those nutrients away.  Still I could tell he  was a little skeptical. 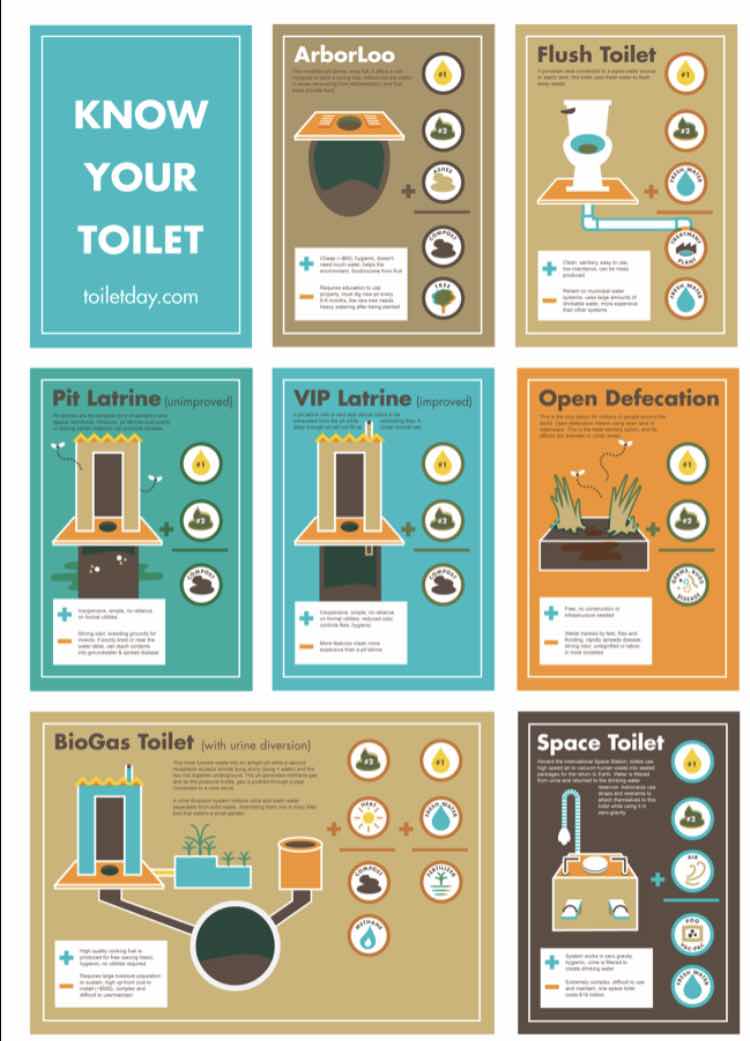 Again not my picture.

When we arrived early this spring to our cabin we quickly had to make a choice of which already existing outbuilding would be the outhouse. There were still several feet of snow but unless we were prepared to drive the 11km to town everytime we needed the washroom it had to be sorted out immediately. We quickly agreed upon a small outbuilding that was attached to the back of a metal shed and began to to adapt it.  We bought a giant bin, peat moss to use as duff, toilet seats and enough wood to make a bench style set up with the bin sliding under the toilet.  Ironically the only items that we needed that were difficult to acquire turned out to be toilet paper and hand sanitizer (due to the Covid panic).  It looked better than many outhouses I’ve had to use in the past but it certainly wasn’t something we were proud of. But it worked and there was still too much snow and frozen ground to make it any better. It was okay and it didn’t stink but it wasn’t the outhouse I wanted yet.

Unfortunately the poor outhouse didn’t become a priority again (there were so many other projects going on in those first few months) until the grandkids were coming up for a visit.  I didn’t want them to be afraid to use the washroom so we spent some time making it nicer.  I had stripped the paint off of the old door and restained  it.  Michael added a pipe with a built in fan that exhausts the air from the poop bin out and over the top of the outhouse.  Adding the fan required setting up a small solar panel, regulator and battery for power.  It’s funny that the outhouse has power capacity before the cabin does but that’s a whole other story.  He lined the inside walls with plywood and swapped out the old, leaky roof with a clear roof that makes the outhouse bright all day long.  We added a simple solar light for at night.  We used the leftover flooring from the cabin to put a new floor in the outhouse too. Most importantly he set up the second toilet.  It’s set up similar to the toilet I saw years ago on the trail for urine with a funnel and a hose. Michael dug a trench for the hose and filled it the area with gravel.  The outhouse looks nice and still smells like fresh cut wood! 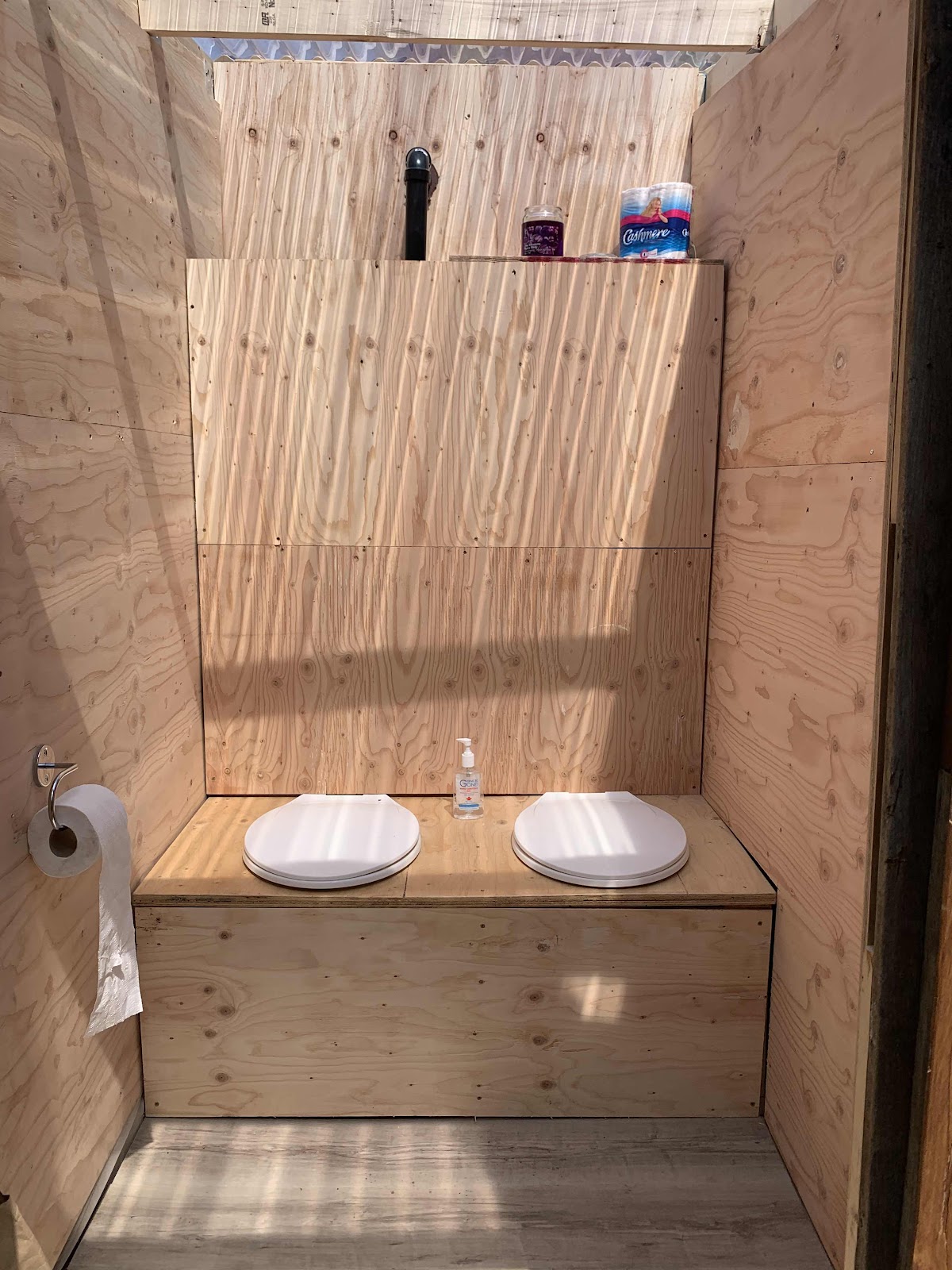 This is what the inside looks like now maybe one day it will be lines with cedar.
And I was happy for about a day... Then I realized that the new roof (that looks so awesome) turned the outhouse into a sauna.  Seriously,  if the toilet seats, or toilet paper and hand sanitizer weren’t there you would think we had purposely built a sauna! For now this has been fixed by adding a piece of screen up high to let fresh air in and leaving the door open when no one is in there. Soon we will add a 12v fan so there  will always be fresh air inside. Eventually I would l would also like to add cedar veneer but as long as it smells like fresh cut wood I will leave it as it is. 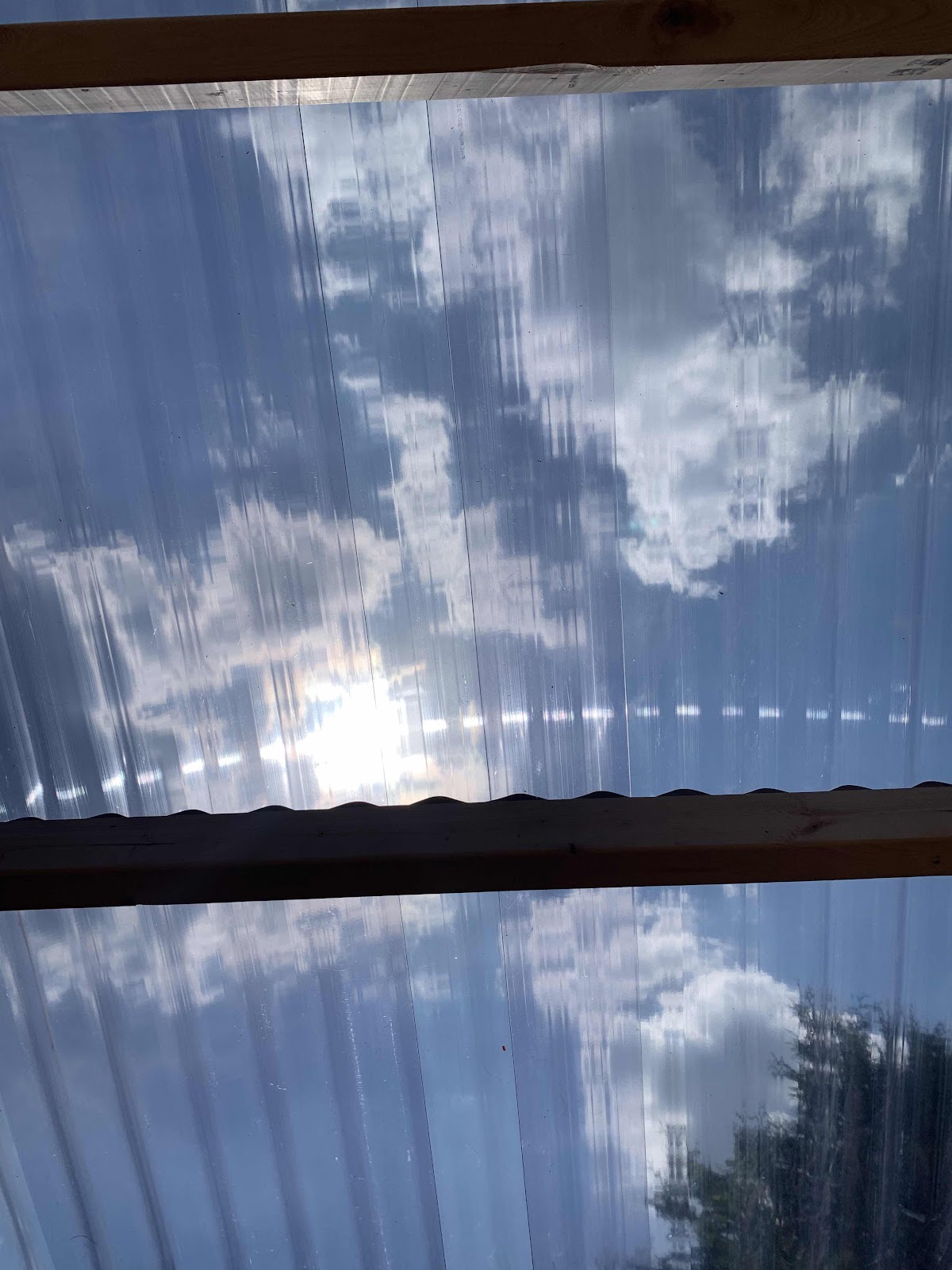 I would love for this to be the end of the post but I can just imagine a few of my friends saying: “and who empties the poop bin?” I do. Michael doesn’t do poop.  The bin probably needs to be emptied once a month but I am choosing to do it once a week to make it more manageable.  It gets dumped on a compost pile in combination with the kitchen compost and the yard compost far enough away from our creek and stream.  Every time I dump the bin I cover the compost pile with a rake full of dead grass to add more air pockets so that it will decompose faster and so that we don’t see it.  So far it doesn’t stink!  Up until recently we have used peat moss for duff but right now we are trying out coconut coir. I like the coconut coir even better than the peat moss as the peat has an earthy smell and the coconut coir doesn’t smell at all. However, the coconut coir is way more expensive and unless I can find it cheaper we will be switching back to the peat moss (@ $8 per 60L).  I’m sure we could ask for sawdust from the local lumbar yard and we may try that out in the future but we have enough supplies to last us to next year right now. 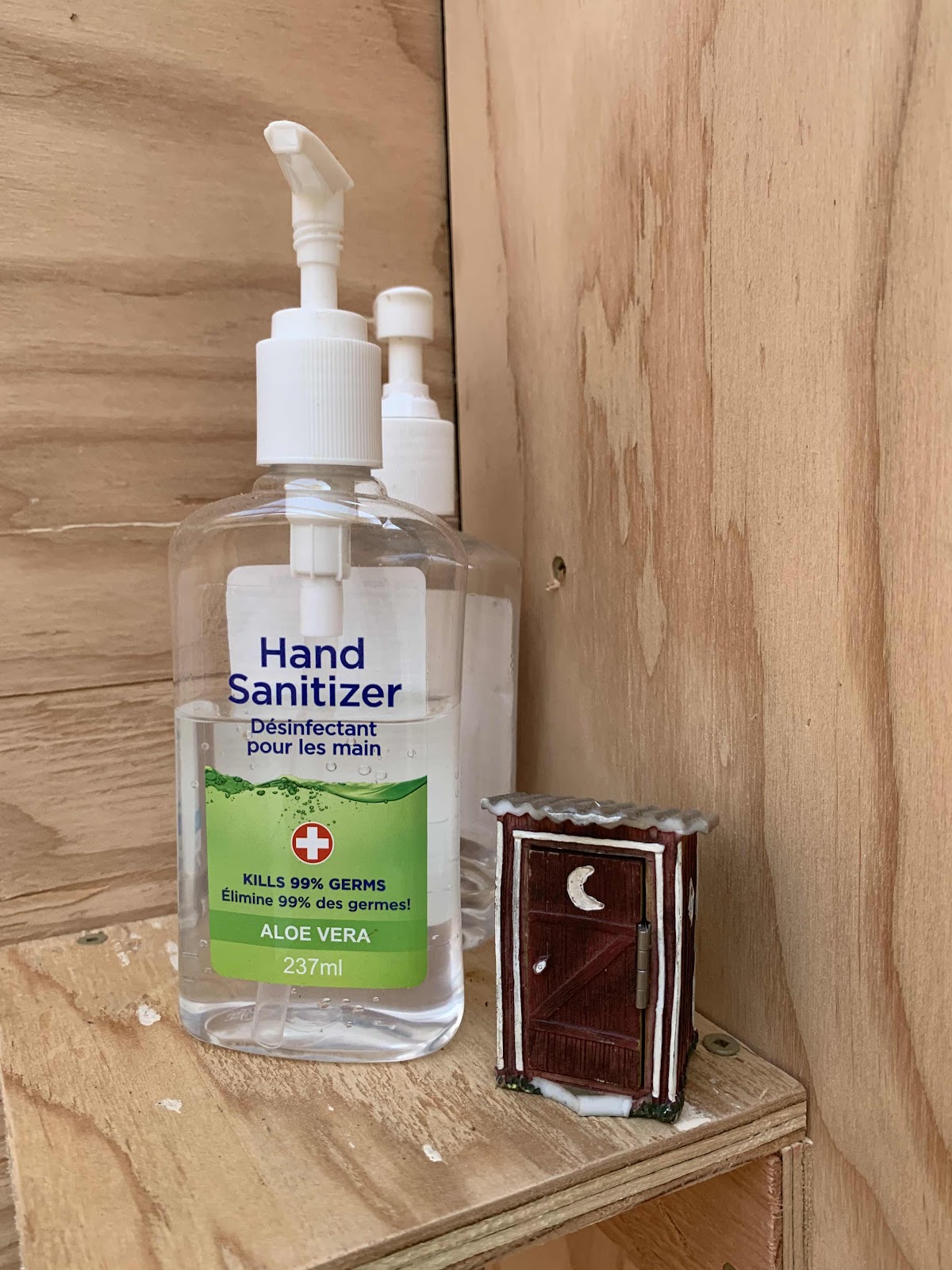 Don’t forget to wash your hands!

Very few people have come to visit so far (again Covid) but the ones who have ask if it bothers me that the washroom isn’t attached to the cabin.  It doesn’t bother me at all and it’s nice to have the chance (or be forced) to go outside at night and notice all the fireflies or the amazing night sky that I probably wouldn’t have given a second thought to if I could easily stay inside. The outhouse isn’t that far away and is only 37 steps from my bed to my outhouse.
Posted by Unknown at 8:36 AM